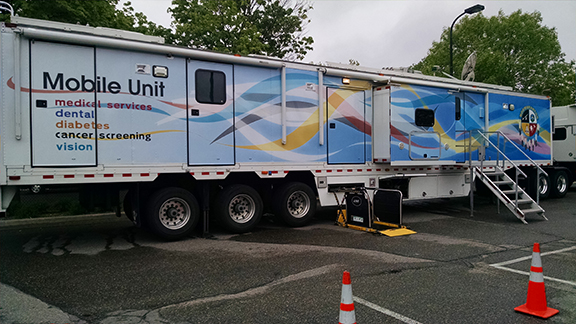 Back in 1986, tribal leaders at the Fond du Lac Band of Lake Superior Chippewa in Minnesota recognized difficulties their members were having in accessing medicines. They started a pharmacy to provide free and low-cost medicines for their members in Cloquet.

It didn’t take long for the Band to recognize its model for operating a pharmacy was working, but Native Americans in Minnesota shared the same problems in both rural and urban settings.

“There was clearly a need,” Elton said. “Our tribal leaders took some risks, but it worked out.”

Those actions by Fond du Lac fills prescription needs for people already in the health care pipeline. In another ground-up action, the Shakopee Mdewakanton Sioux Community at Prior Lake launched a Mobile Unit in 2007 that brings free medical, dental and vision care screening and services to American Indian populations throughout the state.

One recent day when the huge medical unit was parked near Mashkiki Waakaaigan Pharmacy in Minneapolis, the traveling SMSC medical staff was providing free mammogram examinations.

Dan Hockinson, the mobile coordinator, said on past visits around the state the teams have called for ambulance service and performed resuscitation techniques on patients who were in dire need of medical care.

The mobile unit is part of SMSC’s wellness services providing comprehensive health care for community members, SMSC employees and families, and for all other Native Americans living in Scott County on the southwest side of the Twin Cities.

The mobile unit does different types of screening and provides different medical services on its traveling schedule around Minnesota, Hockinson said. In some cases, patients are sent to area or tribal hospital and clinics. In less remote areas, patients are encouraged to see their own or find doctors to treat their needs.

The American Indian Cultural Corridor area has 11 health and education programs, clinics and professional offices housed within two blocks surrounding where the mobile unit was parked.

These Minnesota-based efforts seek to overcome problems of access to health care, pharmacies and medical professionals that are endemic throughout Indian Country.

The U.S. Indian Health Service (IHS) and Census research show IHS provides health services for 2.2 million Native Americans at tribal and reservation facilities, but only 22 percent of the Native population lives on reservations and land trusts.

There are 5.2 million people who identify themselves as part of the American indigenous population of whom 60 percent live in metropolitan areas. While tribal descendant status has overcome problems with blood quantum laws, distances to remote Native medical facilities and programs create problems for accessing health services in a timely manner.

Basic math points out the obvious: Nearly half the Native American population has barriers to accessing medical and health services that result from geographical remoteness, poverty or inadequately staffed clinics and services providers.

This happens even in the Twin Cities despite services available in the American Indian Cultural Corridor. Betty Moore, receptionist at Mashkiki Waakaaigan Pharmacy, said she has a cousin living on a street that is on the border between Hennepin and Anoka counties north of Minneapolis. Living on the Anoka County side of the street, that relative can’t access free or reduced priced prescriptions at the pharmacy.

The Affordable Care Act (Obamacare) and a separate Indian Health Care Improvement Act (IHCIA) both became law in 2010 and tweaked programs for both rural and urban Native populations. They made it easier for health facilities and providers to accept payments from diverse insurers. These include Medicaid, Medicare and private insurance through the ACA’s insurance Marketplace program, or exchanges.

Despite this outreach, an estimated 30 percent of the Native American population that should be enrolled in one or more health services insurance programs is still believed to be uninsured.

“It is helping make our elders and all our people a little healthier,” she said. She added that it also makes the Fond du Lac pharmaceutical program “far more sustainable.”

There was nervousness about how sustainable expanding pharmacy services to the Minneapolis branch might be when Fond du Lac tribal leaders decided to open Mashkiki Waakaaigan Pharmacy in 2007, Elton said. But by tapping into health programs and expanding insurance coverage, “our model is turning out to have worked.”

Data from the forthcoming 2020 U.S. Census will shed light on how the Native American population has seized opportunities for greater health care services under the ACA and IHCIA. The package of those federal programs gave permanent reauthorization for the Indian Health Care Improvement Act that hadn’t been funded since 2000.

Most current evidence of program use and effectiveness is anecdotal from health care professionals and providers. However, the U.S. Department of Health and Human Services (HHS) projects as many as 500,000 uninsured American Indians and Alaska Natives are eligible for accessing private insurance to back up whatever tribal or urban programs might be available.

Access to both programs and services, however, get started with health and education programs. The first steps to healthier lives in Minnesota are planted in areas such as the American Indian Cultural Corridor in Minneapolis, the clinics and hospitals operated by Minnesota’s 11 tribal entities, and outreach and service programs such as provided by Fond du Lac and the Shakopee Mdewakanton Sioux Community.

For more information on the status of American Indian and Alaska Natives health care, see: