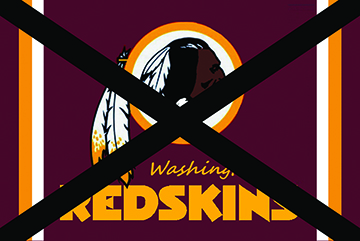 Native Americans are responding with incredulity to a Washington Post poll published last month which suggests a majority of Indigenous people are not bothered by the team name and mascot of Washington’s NFL football team.

The Washington Post asserted that the survey was conducted in order to gather the opinions of “actual stakeholders.” From coast to coast, however, Native people and the organizations that represent them expressed their displeasure over the poll, the methods used to conduct it, and its results.

Many took to social media in May to express their unhappiness over the poll’s miniscule sample size using the hashtag #IAmNativeIWasNotAsked.

Twitter user Jacqueline Keeler (@jfkeeler) wrote: “A poll is not going to stop 5 decades of protest – nothing will until Native people are shown as more than mascots.”

Robyn Lawson (@robynwins111) tweeted: “I am Cree, Metis, Mohawk & I despise that name as much now as I did when I was called one as a child.”

Kenzie Allen (@cerena) wrote: All I can see here is [more] colonial take, take, take. But our cultures do belong to us, no matter what.”

Jacqueline Pata, Executive Director of the National Congress of American Indians, said in an interview published by Fusion News: “The survey doesn’t recognize the psychological impacts these racist names and imagery have on American Indian and Alaska Natives. It is not respectful to who we are as Native people. This poll still doesn’t make it right.”

Change the Mascot, a grassroots campaign based in the Oneida Nation which has long advocated for discontinuing the use of derogatory team names released a statement the day after the poll’s release.  “The results of this poll confirm a reality that is encouraging but hardly surprising: Native Americans are resilient and have not allowed the NFL’s decades-long denigration of us to define our own self-image. However, that proud resilience does not give the NFL a license to continue marketing, promoting, and profiting off of a dictionary-defined racial slur – one that tells people outside of our community to view us as mascots.

“Social science research and first-hand experience has told us that this kind of denigration has both visible and unseen consequences for Native Americans in this country. This is especially the case for children, who were not polled and who are in a particularly vulnerable position to be bullied by the NFL. It is the 21st century – it is long overdue for Native Americans to be treated not as mascots or targets of slurs, but instead as equals.”

In a recent interview, Clyde Bellecourt, a founder of the American Indian Movement and the National Coalition Against Racism in Media and Sports, explained the origin of the Washington football team’s name: “Redskins is the most horrific name in sports history. We believe that the term was used to refer to the bloody scalps taken by bounty hunters from the Indians they killed, starting in the 1500s and continuing through the 1800s.

The English and Dutch found it more convenient to pay bounties on scalps, rather than the entire heads of the Pequot and Raritan people they wanted eliminated. Minnesota paid bounties on scalps after the US–Dakota War of 1862. Colonizers have consistently used ‘redskin’ to denigrate and de-humanize the original inhabitants of this continent, so they could justify killing us off.”

In the face of longstanding and often withering criticism over his team’s promotion of a racial slur, Washington owner Daniel Snyder has said he will never give in to demands for change. Even after the United States Patent Office cancelled the team’s trademark in 2014 – deeming “Redskins” a derogatory term – Snyder remained defiant, telling reporters, “We will never change. Never.”

Following the release of the Washington Post poll Snyder gloated: “The Washington Redskins team, our fans and community have always believed our name represents honor, respect, and pride,” he said in a statement. “[The poll] shows Native Americans agree. We are gratified by this overwhelming support from the Native American community and the team will proudly carry the Redskins name.”

Ray Halbritter of the Oneida Nation, a prominent critic of the Washington football team’s name, said the fight continues. In an interview with National Public Radio last month, Halbritter said, “The fact we’re poll testing a dictionary-defined racial slur against Native Americans shows how much we’ve ignored and continue to ignore the basic humanity [of Native American people].”

Halbritter said he believes the poll was rigged, as no one he knows was asked to participate. “They didn’t survey – for example, you know, I’m an Indian leader. I meet with thousands of Indian people throughout the country. Every major organization in the United States representing Native Americans has called for the name to change… Anybody who believes in doing what is right knows that you shouldn’t use a slur against someone. You shouldn’t say a name to somebody else if they are offended by it, even if it’s not defined as a slur, and this is defined as a slur. And you can’t change that. No poll in the world is going to change the fact this is a dictionary-defined slur that our people are subjected to on a daily basis.”

Asked what those opposed to Washington’s team name and mascot will do next, Halbritter remained steadfast. “We continue on. I mean, this is a process,” he said. “We know it’s not one that is made to be quick and easily done. But all fights aren’t fought simply because you may win them. Fights are made because you need to make the fight.”