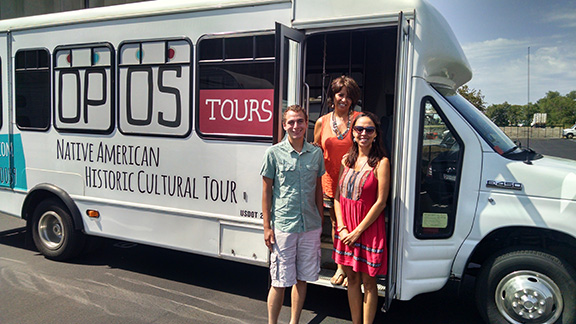 It worked for Henry Wadsworth Longfellow back in 1855. It’s working again for OPOS (Our People, Our Story) Tours and Travel of Bloomington.

By blending some Dakota and Ojibwe culture together, with a little help from the Iroquois, Longfellow created a remarkable Great Lakes regional legend and a poetic classic that is still bringing tourists to Minnesota where they may also learn about Native American culture and history.

OPOS Tours and Travel is a restarted Twin Cities-based tour and travel agency previously known as T & T Native Tours, which was the first 100 percent Native owned travel business two decades ago. Reincarnated, it brings Longfellow’s epic “Song of Hiawatha” to life as part of its Metro Tours packages for visitors and for locals who want to know more about Native legend, culture and history in their own backyards.

About half of the groups that arrange OPOS tours are outsiders from out of state who simply want to enjoy and learn about Minnesota, said Sonja Tanner, founder and president. The other half are locals, including large groups of Native Americans, who want fun outings and to learn more about Native culture, she said.

Tanner and daughter Ashley are members of the White Earth Nation and bring Ojibwe culture and traditions into the enterprise. Both are alumni of Bemidji State University.

Another OPOS partner is Chris Prescott, Shakopee Mdewankaton and descendent from a long established Dakota family. Prescott joined with Sonja Tanner to restart the business in October a year ago and was guided by two yearnings. He said, “I knew I wanted to be an entrepreneur,” he said. The other motive was equally personal. “I have always loved travel.”

He has traveled extensively around the world in what indigenous people in Australia might call “a walkabout.” The reception for Native American exhibitors he recently witnessed at an international travel fair in Germany reminded him that North American Native people and their cultures are of great interest to world travelers. Going forward, he said, the tour and travel company will seek to attract more of these travelers to Minnesota and its 11 Ojibwe and Dakota tribal communities.

OPOS currently has three tour guides to accompany groups and two bus drivers, said Sonja Tanner. The firm also has three travel agents working that side of the business. Both the travel and tour sides work with local Native tour groups away from the Upper Midwest area to book travel experiences in locations where OPOS doesn’t have people on the ground, she said.

The company is now booking winter tours to Hawaii through Native Hawaiian organizations, for instance. Such linkages are formed through Sonja Tanner’s more than 20 years in the travel industry and through other indigenous organizations. She is currently a board member of the American Indian Alaska Native Tourism Association (AIANTA), and works with the World Indigenous Tourism Alliance (WINTA) that includes leaders from Native groups in New Zealand, Nepal, Australia, Sweden (Sami), Canada and Ben Sherman of the Oglala Lakota at Pine Ridge, S.D.

Closer to home, Sonja Tanner said the company works closely with the 11 tribal organizations in Minnesota, with the state of Minnesota, and she has started a nonprofit organization among groups and government tourism units (NATOM) to promote Native tourism.

OPOS is booking tours to historic sites in Montana with local tribal groups there. It crossed over into Wisconsin in July on the south shore of “Gitchee Gumee” with a tour to Madeline Island and a visit to the Red Cliff Band of Lake Superior Chippewa. That tour studied the 500-year history of the Anishinabe migration surrounding the Great Lakes.

Forthcoming Hawaiian tours are the winter season flip side to summer Twin Cities’ metro area tours, Sonja said. OPOS tailors these summer metro tours to the groups and their interests. For distinctly Native groups, the tours will focus on historic and sacred sites. For outsiders, the tours arrange visits to “Minnesota things… the Mall of America… when we have groups that haven’t been to Minnesota before,” she said.

Arranging tours and travel becomes a collaborative effort with site organizations and with customers, the Tanner mother and daughter both stressed. Therefore, they offer one- and two-day excursions that they call “Cultural/Casino Packages.” These include outings to the Mille Lacs Band of Ojibwe and its Grand Casinos, the Grand Portage Band and Grand Portage Lodge and Casino, the Lower Sioux Indian Community and its Jackpot Junction, and Leech Lake Band of Ojibwe and Norther Lights Casino.

What OPOS has done so far for travel clients and collaborating partners is blend culture, the Longfellow legend of Minnehaha, Hiawatha and Nokomis, and depending on group interests, revisit the long history of Dakota and Ojibwe people in the region, Sonja Tanner said.

That includes offering special five-day tours of historic sites involved in the “Mni Sota Dakota Battle,” using the Dakota word for the state’s name. This war, not a battle, is more widely referred to as either the 1862 Dakota Uprising or the Dakota Massacre in Minnesota. It was the largest Indian War in American history, OPOS notes, effectively ending with the hanging of 38 Dakota people at Mankato. That also represents the largest mass execution in American history.

The tour plan is to present the history of that conflict “and try to avoid the negativity as much as possible,” Tanner said. That isn’t easy, she admits. But one positive way of looking at 1862 is that “it could have been so much worse. He (President Abraham Lincoln) did pardon 300 others.”

That, too, contributes to telling Native Americans, all Minnesotans and all Americans who we are as a united people even when it can’t be spun as beautifully as a Longfellow poem.

For more information about OPOS Tours & Travel, check their website at www.opostours.com or email them at info@opostours.com .