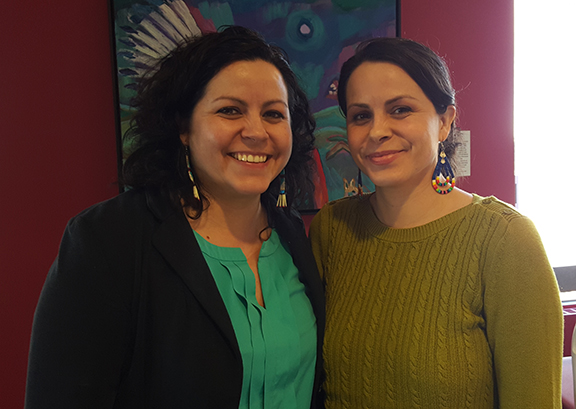 When I first interviewed Kate and Carly Beane (Bad Heart Bull) for Rake Magazine in 2006, they had recently moved to Minnesota, the homeland from which their family was exiled 143 years earlier following the Dakota-US War of 1862. Both of the twin sisters, citizens of the Flandreau Santee Sioux Tribe, had been experiencing hard times and hoped their return to a state in which neither had lived but where they had deep historical roots, would help restore balance to their lives.

The first thing they wanted to do upon arriving in Minneapolis, they told me at the time, was see their ancestral village, Heyata Otunwe (the Village to the Side, their grandfather Cloudman’s Village), at Lake Calhoun. “We thought, that’s our lake; let’s go see it. So we drove around it and were saddened. I guess in a way I was picturing it to look like a Seth Eastman painting,” Kate said. “He depicted scenes of traditional Dakota life with tipis, lodges, women cooking, trees, kids playing and lots of dogs.”

“It was the middle of summer,” said Carly, “and the lake was packed – people rollerblading, tons of traffic, mansions everywhere. All we knew was that this lake was where our people called home.”

As direct descendants of both Mahpiya Wicasta (Cloud Man) and Seth Eastman the sisters knew that the lake would have changed. “It’s not as if we were expecting Cloudman’s Village to still be here,” Kate added. “We knew things would be different. But we saw the lake with our hearts; we saw how it used to be, because that was the last time our family was all together, living in our homeland, and in peace.”

The sisters soon understood that living in Minnesota alone would not rectify the wounds of exile. At a recent meeting on the 24th floor of the US Bank Building in downtown St. Paul, where Carly works for a regional philanthropic foundation, and which offers stunning views of Kaposia (Little Crow’s Village) – they explained to me the process they’ve engaged over the past decade in their quest for healing.

“We grew up wondering why we weren’t living in our homeland, and why we weren’t raised with our language,” Kate said. The sisters both dropped out of high school at fifteen-years old.

“We didn’t feel like we mattered. We were part of an educational system that wasn’t created for us. Our story wasn’t being told, and like many Native students, we felt invisible.” Carly said.

It was in learning their culture, history, and their language that they gained confidence. “As young Dakota people we were guided by the process of coming to understand our history,” said Kate. The sisters believe that present and future generations, both Native and non-Native, will benefit from learning the historical and current contributions of Dakota people in the area, and they feel that restoring the name Bde Maka Ska can be a catalyst for such change.

Today both sisters have completed their educational goals. Carly has a law degree and is a licensed attorney, and Kate is a Ph.D and a scholar of Dakota history. While the two have achieved a great deal of personal growth and career success, they say they have set their sights on how to support the future generations to come. To that end, the sisters are members of the Lake Calhoun and Lake Harriet Improvement Plan Community Advisory Committee, a group tasked with recommending changes to be made as part of the Minneapolis Park Board’s $3.7 million renovation of facilities at the lakes.

One proposal in particular has the sisters’ backing. They want the Community Advisory Committee’s final report to support officially restoring the name of the lake to its original Dakota name of Bde Maka Ska (White Earth Lake), a designation that is still widely used within the Native community.

“By recognizing in a formal way that Bde Maka Ska has always been the name of this lake, we have an opportunity to help a broader group of people,” says Kate. “The African American community is upset with the name Calhoun because of who John C. Calhoun was – a very pro-slavery senator. Calhoun also has a problematic relationship with indigenous people as the politician who drafted the Indian Removal act in 1830, which led to thousands of exiled and murdered indigenous people. Calhoun created the Bureau of Indian Affairs within the War Department. So his legacy with indigenous and oppressed people is not healthy.”

In September, in response to the urging of Dakota community members to recognize the lake’s original Dakota name, the Park Board authorized new signage around the lake to include both Lake Calhoun and Bde Maka Ska. Still, the lake’s official name remains Lake Calhoun. To the frustration of name reclamation advocates, there has not been an agreed upon established process to restore the lake’s original name; however, Kate and Carly are quick to point out that does not mean it cannot be done or that a process does not exist.

“Not everyone has agreed on what government entity has the authority to do this,” Carly says.  “People don’t seem to want to take it on, so it’s kind of been kicked around to different agencies.”

“My understanding is that ultimately the Hennepin County Board of Commissioners and the Minnesota Department of Natural Resources are the ones with the legal authority to restore the name,” Carly said. “However, we also know that any entity looking into the name restoration is going to look to the Park Board for guidance on this issue.”

The sisters are urging supporters, both Native and non-Native, to show up at the March 24 meeting of the Community Advisory Committee and urge CAC members, during the public comment session from 8 to 8:30, to vote in favor of supporting full restoration which, the sisters say, would have far reaching, and long lasting benefits for the community.

“When I go to Bde Maka Ska with my kids – my three-month old, and my two-year old who is just learning to talk – I teach them our family’s story of survival,” says Kate. “I teach them that we have a powerful connection this place as Dakota people. I want them, and the youth of our communities to know that this is their home – that we are welcome here.”

The next meeting of the Lake Calhoun and Lake Harriet Community Advisory Committee will be held March 24 at the Minneapolis Parks and Recreation Headquarters, Board Room, 2117 West River Road, Minneapolis from 6:00-8:30 pm. For info, see: www.facebook.com/Bde-Maka-Ska-Name-Reclamation-976582865759475 .