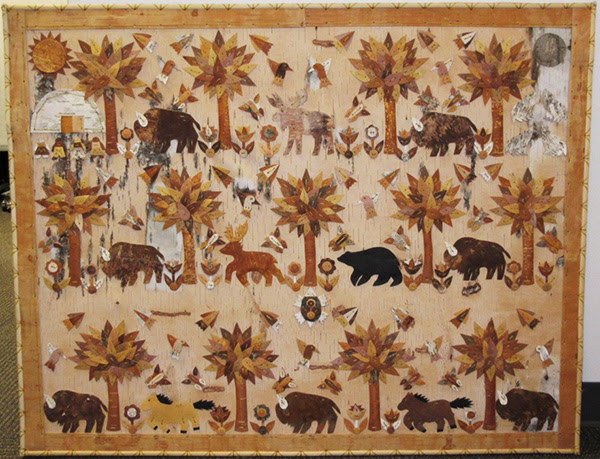 Pat Kruse and his son, Gage, members of the Red Cliff Band of Ojibwe, along with the Minnesota Historical Society, donated a birch bark mural called “Nature’s Beauty” to the Children’s Hospitals and Clinics of Minnesota. The artwork was placed in the Family Resource Center at Children’s Minnesota’s St. Paul campus in December.

(By Michael Meuers) – In January, Red Lake Middle School welcomed Resident Artist, Bobby Wilson, from the comedy troupe, 1491s. Wilson worked with students and staff from January 4 to 15.  A large mural was painted in the middle school’s main hallway and was inspired from floral beadwork designs on Native American shoulder bags from the 1800’s. Art teacher, Janel Lackner, said that about 80 students took part in helping to complete the mural.

In 2016, Minnesota Organization on Fetal Alcohol Syndrome (MOFAS) is awarding grants to 17 organizations across Minnesota to host community events on Fetal Alcohol Spectrum Disorders (FASD) prevention. All aim to reach and educate under-served and at-risk communities including young, rural, low-income, under or uninsured, homeless and chemically dependent women and reach into the Hispanic, African American, Native American, Somali, and Hmong communities.

The Minnesota Job Skills Partnership has awarded a $350,000 grant to Fond du Lac Tribal and Community College to develop an in-house training system for employees of Sappi Fine Paper in Cloquet. The three-year project will support entry-level, retraining, and advanced training for 560 employees at the paper mill, the Minnesota Department of Employment and Economic Development announced during a partnership signing agreement ceremony held at Sappi’s Cloquet Mill on January 28.

The proposed Knowledge Management and Training System will be used to identify, document, and transfer employees’ knowledge so that critical information can be passed on from retiring generations of workers to new ones.

Once fully developed, Fond du Lac Tribal and Community College will have full rights to duplicate and customize the framework to fit the needs of other manufacturers and businesses in the community.

Members of the Shakopee Mdewakanton Sioux Community (SMSC) elected incumbent Charlie Vig as Chairman, incumbent Keith B. Anderson as Vice-Chairman, and Freedom Brewer as Secretary/Treasurer of the Business Council on Tuesday. The SMSC’s three-person Business Council is responsible for the operations of the tribal government.

Vig became Chairman in August 2012 after the passing of then-Chairman Stanley Crooks. He also served for 14 years on the SMSC Gaming Enterprise Board of Directors, which oversees Mystic Lake Casino Hotel and Little Six Casino.

Anderson has served as Vice-Chairman since August 2012; he previously served as Secretary/Treasurer for eight years.

Incoming Secretary/Treasurer Freedom Brewer will serve her first term on the Business Council. She presently serves as Chairwoman of the SMSC Gaming Enterprise Board of Directors, which she has been a member of since 2002.

Current Secretary/Treasurer Lori Watso, who has served since 2012 and held her first term from 2000-2004, did not seek re-election.