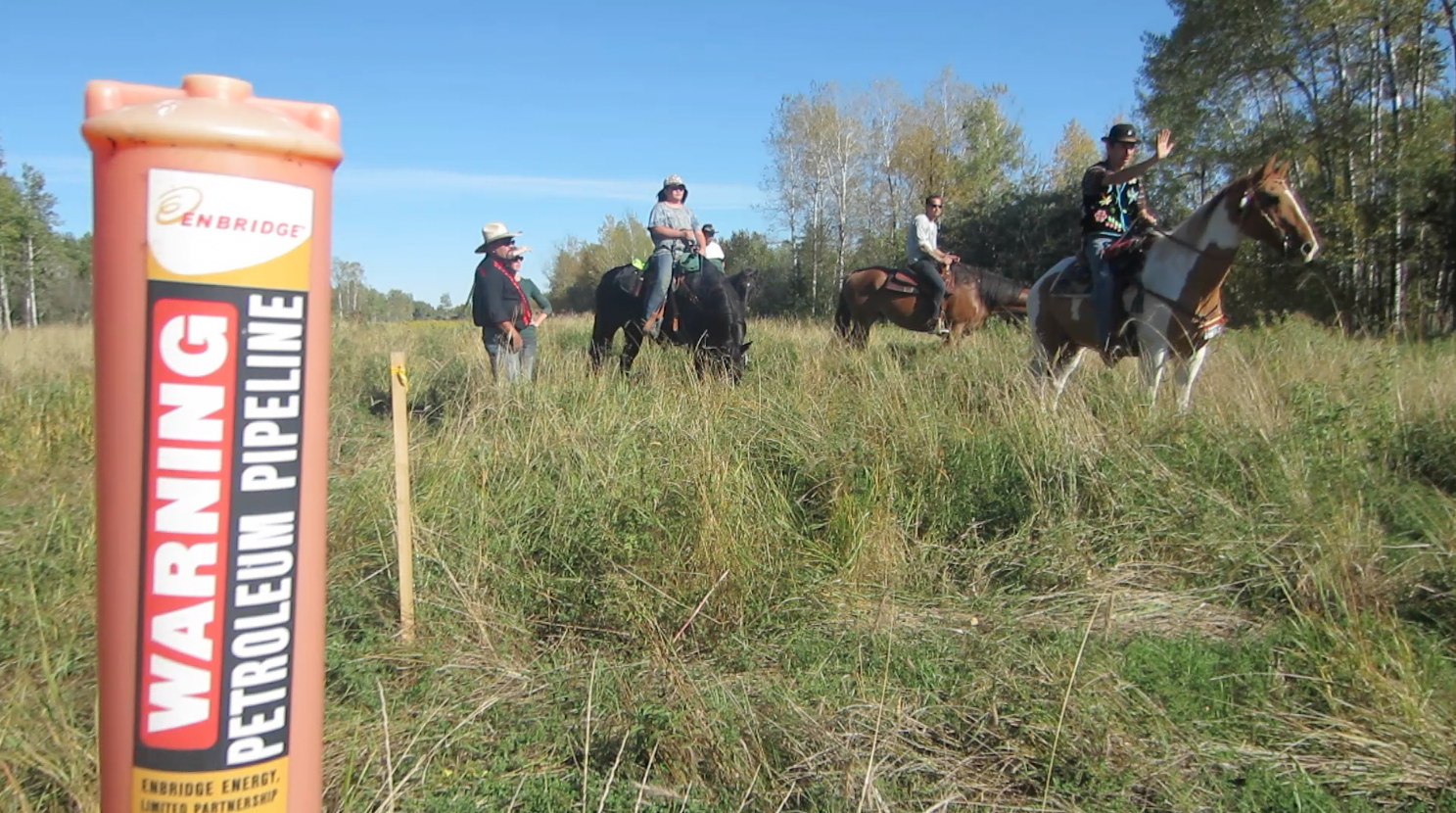 There’s a beauty in the breath of

horses, fall mornings a bit of breath seen in the air and the smell

and sound of horses. One hoof at a time. Bebezhigogonzhiig … one at

Mississippi Band members rode horses from the headwaters of the

Mississippi along a proposed route of a new oil pipeline, which would

We were joined by local people on

horseback, in the third of a series of rides on oil pipelines

sponsored by a national organization, Honor the Earth. Those rides

proposed Keystone XL route in the Dakotas, where riders from White

Bridger on the Cheyenne River Reservation. “We are not protesters,

we’re protectors,” Michael Dahl told me. That is true.

called this the triple crown of pipeline rides. What’s at stake is

a lot of water and a lot of risk. In the Dakotas it is a land without

a single pipeline across it and one large aquifer, the Ogalalla. “We

can buy bottled water and drink it,” Percy White Plume told me,

“The buffalo and horses cannot.” This is a good point. So it was

that l5 riders braved some harrowing terrain, a land littered with

the sides of roads, gullies and the like) and rode a proposed

In Minnesota it is wild rice, water and oil.

The Enbridge pipeline corporation is proposing to both expand a

capacity and making it the largest tar sands pipeline in the U.S.

That has it’s own risks, like those of carrying dilbit – a highly

corrosive substance – in a pipeline which is monitored from

Edmonton, Alberta. The Enbridge company also wants to construct a

610-mile pipeline from near Tioga, N.D. to Superior, Wis. This is the

same oil as the 800,000 gallons that devastated a Tioga farm field in

North Dakota in early October (that pipeline was six inches, the

proposed pipeline is 30). The proposed Sandpiper pipeline would carry

375,000 barrels of oil and cross through White Earth’s four

rights-of-way and tribal support … Enbridge is facing some

“This is land that has been in my family for

decades. It is prime Red River valley agriculture land. It was handed

and I have … told our children that we will pass this on. Of course

if 225,000 barrels of oil bursts through this thing, that certainly

is the end of this family legacy.”

North Dakota company asked James Botsford if they could survey his

land. He did not want them to. “I told Enbridge … I am not going

to give you permission.” Botsford said. “You are going to have to

take it.” So Enbridge filed a restraining order against Botsford,

“denying me the private use of my own land.” It is not clear that

the Enbridge North Dakota Corporation has the same rights in

trumped his rights. Enbridge seems pretty comfortable with that

position, particularly since the Canadian corporation became a North

Dakota utility, which allows the corporation to have eminent domain

rights within the state. That occurred less than two decades ago and

They haven’t been so lucky

everywhere. In June of 2013, the British Columbia government denied

Enbridge permits for a very large pipeline – called the Gateway

the corporation. Enbridge does not – it seems – get all that it

for four days before he discovered the leak, leading to questions

about why the spill wasn’t detected sooner … ”

– Reuters News Service said of the

Right now most of the oil moving in

this country, from the Bakken fields – that is, basically the Ft.

That is perhaps why Warren Buffett

purchased the Burlington Northern Railroad; because he saw the money

was on the land locked oil. The problem is that the oil is moving

town of Lac Megantic. Quebec blew up from this Bakken oil.

Forty-three people were “vaporized” in an explosion that baffled

Canadian authorities, who had never seen anything like it. Bakken

oil, the stuff they want to put in the Sandpiper line, seems to be

very volatile, like a bomb in a pipeline; which, seems a bit

worrisome. It’s even more worrisome since the North Dakota accident

not sure, but I think that lightning and a very volatile substance

may be a very bad idea in a pipeline.

Enbridge’s pipelines are largely monitored by the company. There’s

a piece of technology called a “pig,” which goes through the

lines to check them for structural problems. This pig hasn’t worked

out too well, it seems. According to Enbridge’s company data,

between 1999 and 2010, across all of the company’s operations there

million gallons) of hydrocarbons into the environment. This amounts

Exxon Valdez after it struck a rock in Prince William Sound, Alaska

in 1988. The single largest pipeline oil spill in US history was the

Kalamazoo spill, which was an Enbridge line. According to testimony

by Michigan lawmakers, “Federal regulators are investigating the

2010 rupture of Line 6B, part of the Enbridge-operated Lakehead

open and spilled around 20,000 barrels of oil into southern Michigan

waters.” So maybe the pig was mute, I don’t know.

And in 2010 Enbridge Energy Partners

(one of several subsidiary corporations) was fined $2.4 million for a

according to the Minnesota Post, found that Enbridge, “ … failed

to safely and adequately perform maintenance and repair activities,

clear the designated work area from possible source of ignition and

In 2012, the United States Pipeline

System. In addition, Canada’s National Energy Board stated that

stations and is analyzing the concerns and solutions.

In an August interview, Greg Shelen

Hubbard, could it get closed down anywhere. Sheline replied, “It

can. There are block valves placed on the mainline, as well as the

pump stations that can be used to close off the flow. The block

valves are positioned according to a program that takes into

consideration the geography of the land, any navigable water ways,

wetlands and areas of high consequence. And that’s how the valves

are positioned strategically along the line.”

The pipeline safety system itself,

however, is not local, “This line – the Sandpiper line – the

plan is that it will be operated from the control center in Estevan,

Saskatchewan … northwest of Minot, across the Canadian border,”

Sheline said. “They monitor pump stations and other technology

that’s on the line. That information gets reported back to the

control center, so that the operators can monitor the operation.”

“We don’t know if any of those

of our environment. Our lakes and wild rice beds will be here

forever, but if there’s an oil spill, they will be destroyed and

Enbridge will not be here. They are a 50 year-old Canadian

corporation and we are a people who have lived here for 10,000

What is Bakken Crude?

Now this is really the million

from western North Dakota, much of it from the Ft. Berthold

reservation, where there is a huge controversy about this oil. One of

is in it; in short, it’s not your mother’s crude.

A 2011 study published in the Human

toluene, xylene, ethyl benzene – all known carcinogens. Because of

a federal law (2005 and an amendment called the Haliburton loophole)

fracking companies are not required to disclose the contents.

Where is it Proposed?

According to Enbridge, the

Reservation south of Bagley and run along the eastern boundary of

through a portion of the Mississippi Headwaters State Forest,

meanwhile passing along the eastern boundary of White Earth

Reservation then, snaking in between the Fond du Lac and Mille Lacs

We live in the north. This is the

good land, and this water is our life blood. One-fifth of the world’s

I’m done riding for the winter, I

think. But I’m not done talking about pipelines and think that we

should all know about them. If they are underfoot, under water or if

they are proposed. The Leech Lake and Fond du Lac Bands could easily

intervene in the hearing process on Enbridge’s expansion of the

which is traversed by this pipeline. The White Earth tribal

government has the opportunity to intervene early in Enbridge’s

right-of-way requests and the regulatory process. This would probably

be a good idea.

In the meantime, our horses are

there. And, from what I can tell, although the tribal constitution

views me as a White Earth Tribal member, I am from the Mississippi