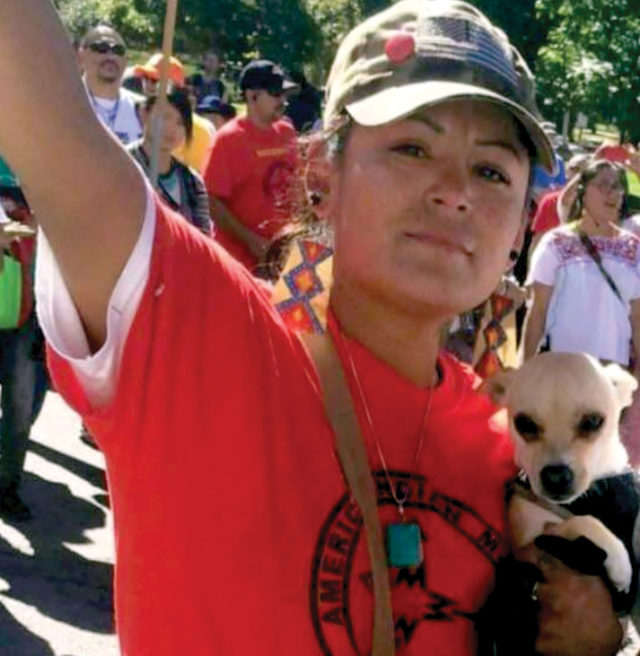 Early July marked two very different approaches to justice. One towards Native people and another towards non-natives Steve and Dwight Hammond, who were convicted in 2012 of setting fires that spread on government-managed land near their ranch in Oregon.
On July 8, Water Protector Red Fawn Fallis was sentenced for her involvement as a Water Protector at Standing Rock. Judge Daniel Hovland sentenced Red Fawn Fallis to a total of 57 months in federal prison. She received a credit of 18 months ‘time served’ based on her time in North Dakota jails.

Red Fawn’s case has been a major concern to Water Protectors. Despite over 800 arrests, the commitment to non violence was consistent. The case against Red Fawn had centered around allegations she fired a gun during her arrest on October 27, 2016, during a massive military raid. The gun allegedly fired by Fallis was later revealed to have belonged to Heath Harmon, an undercover FBI informant who was romantically involved with Red Fawn at the time of her arrest.

In January 2018, Fallis entered a plea agreement in which prosecutors agreed to seek a sentence of less than seven years. In exchange, she pleaded guilty to charges of ‘Civil Disorder’ and ‘Possession of a Firearm and Ammunition by a Convicted Felon.’
Judge Hovland had forbidden Fallis’ defense team from mentioning treaty rights or other issues related to her arrest.

Elsewhere, Trump pardoned Oregon cattlemen Steve and Dwight Hammond, both convicted of setting fires on federal land. And Forrest Lucas, a friend of Vice President Mike Pence, gave them a ride home in his private jet.

“I don’t know the machinations of how it happened,” Portland lawyer Lawrence Matasar, told reporters with regards to Dwight Hammond and his son Steven Hammond. “This was not the standard process.”

About 10,000 applications for clemency presently sit with the Justice Department. Most of those never see the light of day. Trump, by comparison, has issued high-profile pardons early and comparatively often.

“We requested clemency and got a pardon,” Matasar said. “Somebody with a five-year sentence, and someone whose prosecutor was opposed would never get a pardon under the previous regime.” Apparently Trump has issued pardons to people brought to the president’s attention by the reality television star Kim Kardashian West and the actor Sylvester Stallone.

To give a slightly larger context; the Hammond had been convicted of arson on Bureau of Land Management (BLM) land in 2001 and 2006. Their case sparked Aamon Bundy and others in non-government militias to take over the Malheur National Wildlife in Oregon.
By August 2017, a dozen had pleaded guilty, and six of those had been sentenced to 1–2 years probation, some including house arrest. Seven others, including Ammon and Ryan Bundy, were tried and acquitted of all federal charges. In short, Oregon ranchers have secured lighter sentences; or, in this case, pardons and a private jet.

Back in North Dakota, Red Fawn is expected to serve 39 months in prison, followed by three years of probation. She pled guilty to “ civil disorder” and “possession of a firearm and ammunition by a convicted felon.”

ed Fawn and her supporters had previously maintained her innocence and had stated that Fallis accepted the plea deal under the assumption that she would not receive a fair trial due to prosecutors withholding evidence.

Before she was sentenced by Judge Hovland, Fallis told the court, “No matter where I go from here I am going to continue going forward…I wanted to move forward in a positive way, away from Heath Harmon and the things he tried to put on me while I was trying to push him away.”