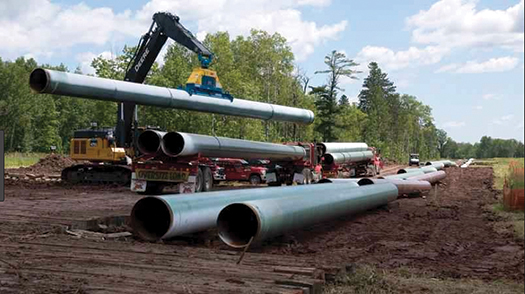 As Enbridge unrolls it’s plans for Line 3 and the beginning of the largest web of tar sands pipelines in the world, tribal leaders and communities are challenging both the long term and expired leases of the corporation, and the need for new lines.

Line 3, the heart of Enbridge’s profit plan, would bring 760,000 barrels of oil down the same pipeline as the ill fated Sandpiper, last year’s now defeated Enbridge Line. Tribal environmental hearings are being held in February in Cass Lake, Bena and Ball Club, and 60-year-old pipelines are being questioned for safety.

The Bad River Tribal Council passed a formal resolution January 4th that established the Tribe’s decision not to renew its easement for rights-of-way of Enbridge Energy’s Line 5 crude oil, 64-year-old pipeline through the Bad River Reservation. Furthermore, it calls for the decommissioning and removal of the pipeline from all Bad River lands and watershed.

“As many other communities have experienced, even a minor spill could prove to be disastrous for our people. We depend upon everything that the Creator put here before us to live minobimaadiziwin, a good and healthy life,” said Bad River Tribal Chairman Robert Blanchard.

The Band has directed Tribal staff to begin planning for the Line 5 removal project development and the environmental issues and hazards that exist with removal of old pipelines, including hazards response and health study, pipeline contents recycling and disposal, and surface restoration.

“These environmental threats not only threaten our health, but they threaten our very way of life as Anishinaabe. We all need to be thinking of our future generations and what we leave behind for them,” said Tribal Council Member Dylan Jennings

The Minnesota Chippewa Tribe is beginning tribal hearings on the proposed Enbridge Line 3 plan. The Minnesota Chippewa Tribe, 1855 Treaty Authority and tribal governments have deemed it necessary to conduct their own environmental hearings, after the state of Minnesota dismissed tribal concerns and jurisdiction in the previous hearing process. This includes the abandonment of Line 3 in place, and would set a precedent for the abandonment of the five other pipelines in the same Highway 2 Corridor.

In November, the Minnesota Chippewa Tribe passed a resolution directing the process of putting together a Tribal Cumulative Impact Assessment on the proposed abandonment and new corridor. The first informational meeting was held January 4, in Cass Lake, and attended by over l00 people. Leech Lake Environment and Lands Director Levi Brown and MCT Environmental Program Director Michael Northbird are hosting the meetings and the hearings.

Amber Cross, Mika Northbird, Maci Headbird, and Nancy Beaulieu were among those who came to the first meeting. They had also been at Standing Rock and like many, had faced police, rubber bullets, and water cannons. “When we were getting hosed down, we just kept saying, ‘Stay in prayer’, said Mika Northbird.

“There were moments when we were scared but when you’re called to the frontline you stand together, you don’t stand alone,” Nancy Beaulieu said. “Enbridge needs to remove the pipes and clean up the mess.”

Maci Headbird, a sixteen-year-old woman, took the microphone as well, We do not want Enbridge here, we do not want these pipelines.

For myself, I was threatened with arrest by a plain clothes cop and a Bemidji Policeman for asking a question at a December Enbridge open house. My question was, “How are you going to account for what you did in North Dakota? We suggest that Enbridge as a 28% owner of the DAPL line is responsible for a third of the bullets, a third of the tanks, tear gas and injuries.”

The Minnesota Public Utilities Commission (PUC) is proceeding with a court ordered environmental impact statement. At the same time, Honor the Earth, tribal governments and environmental organizations are asking that the PUC be replaced with the Minnesota Pollution Control Agency or the Environmental Quality Board on the process, due to the poor example set in the last round of hearings by the state. As well, tribal leaders and many other organizations believe that the PUC is not equipped to do an Environmental Impact Statement, while the Minnesota Pollution Control Agency, with 700 staff would have more expertise.

The Environmental Impact Statement scope outline provided very little discussion of abandonment (which would impact three Minnesota tribes), tribal treaty rights, and the environmental impacts of the pipeline in terms of tar sands destruction or the impact of climate change.

New opposition has emerged in Manitoba, Canada and a treaty to oppose the Tar Sands has been signed by a number of political leaders, including White Earth Tribal Chair, Terry Tibbetts. Tribal leaders in Wisconsin and Michigan face both abandoned lines liability, in the precedent setting.

A tribal meeting will be held February 11th and l2th in Duluth, Minn. followed by a Sioux Chef Feast on the 13th, sponsored by Honor the Earth. In mid-February, John Bolenbough, an Enbridge Whistle blower, who attempted to clean up the Kalamazoo Spill, began his tour of the northland. His film on Enbridge’s inad-equate clean up will be out in March.

Finally, the Duluth City Council unanimously passed a resolution supporting Standing Rock and has been badgered and bullied by Enbridge and the Duluth News Tribune, despite wide-spread support for Standing Rock. Enbridge seems to be pushing a heavy hand in the Twin Ports.

In short, things are not looking so good for the big company. But for the Anishinaabeg and all others it will be time to join together to testify, inform each other, and prepare for the next round of battle against the Black Snake.

Tribal hearings begin on February 1, 8 and 15th in Cass Lake, Bena and Ball Club. It is expected that White Earth, Mille Lacs and Fond du Lac may also hold hearings.

For more info, see Honor the Earth’s website at: www.honorearth.org.