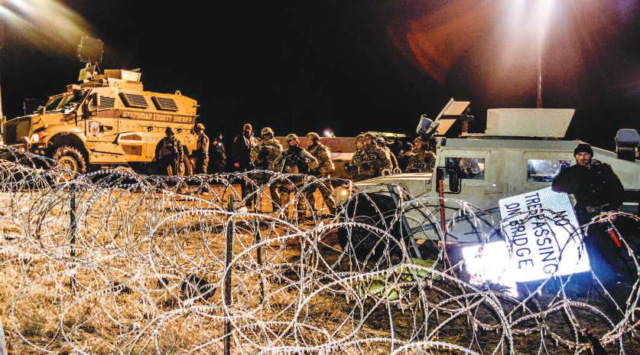 Tribal unity is a lesson from Standing Rock. Thousands of people joined with the Lakota Nation to oppose the Dakota Access (AKA Dakota Excess Pipeline). That unity is spilling over into the Great lakes. Anishinaabe tribal governments and people put our bodies on the line, and not only sent flags and representatives, money, food, and wood (Menominee sent a semi load of wood at least), but political unity and commitment. In that, it would seem, we committed to follow the leadership of the people of Sitting Bull, and put our minds together. In mid December, the Enbridge Company found out that the lessons of Standing Rock were well learned by our people, but apparently the company was not taking notes.

While Canadian Prime Minister Trudeau approved permits for Enbridge’s largest project, a 760,000 barrel per day Line 3 tar sands pipeline, things on the ground were different. That pipeline is proposed for the same corridor as the Sandpiper, and also entails the beginning of abandonment of five or six 50-year-old pipelines down the Highway 2 corridor.

The Bad River Tribe in mid December announced it would not approve a continued easement for Enbridge across their reservation, and tribal members in Bemidji were threatened with arrest for asking corporate accountability questions. It turns out, the Canadian Premier can give a project a nod, but the Anishinaabeg have not. Enbridge with the Minnesota Department of Commerce are proceeding in the environmental impact statement for the proposed Line 3 new corridor (the same corridor as the Sandpiper), as if nothing has happened. The Ojibwe have long memories, and it turns out, can even remember November 20th, that fateful night on Backwater Bridge.

A December 13th landowner informational meeting in Bemidji was primarily aimed at white landowners and county commissioners. When Thomas Barrett (aka Thomas X) learned of the meeting, he shared the information widely, and Enbridge representatives found themselves in a room of 100 plus concerned landowners, many from Leech Lake, Red Lake and White Earth. Asking a question in this forum, lead the Bemidji police and a security guard to ask me to leave. The question was, “As one third owner of the Dakota Access Pipeline project, is Enbridge responsible for the injuries to our people?” That’s enough to get you kicked out of a room, it seems.

When Enbridge announced the cancellation of the proposed Sandpiper pipeline, after a four year battle in Minnesota, they bought a 28% interest in the ill fated Dakota Access Pipeline (DAPL) that runs through North Dakota.

The DAPL facts: As of November 18, the Morton County Sheriff’s Department (in Mandan, No. Dak.) inventoried their troops at 1,287 deputies, including police from 25 North Dakota counties, 20 North Dakota cities, and 9 states (Indiana, Louisiana, Minnesota, Montana, Nebraska, Ohio, South Dakota, Wisconsin and Wyoming). Over 550 people had been arrested, many of them strip searched and cavity searched for misdemeanor charges, and many were held overnight in dog kennels. Military and police forces fired on unarmed people who want to protect the water from contamination.

On Backwater Bridge, 21-year-old New York resident Sophia Wilansky’s arm was blown off by a concussion grenade. Morton County Sheriff Kirchmeier suggested she caused it. A statement from her father, attorney Wayne Wilansky, differs, “At around 4:30 pm after the police hit the bridge with water cannons and rubber bullets and pepper spray, they lobbed a number of concussion grenades, which are not supposed to be thrown at people directly…. A grenade exploded right as it hit Sophia in the left forearm taking most of the under-surface of her left arm with it. Both her radial and ulnar artery were completely destroyed. Her radius was shattered and a large piece of it is missing. Her medial nerve is missing a large section as well. All of the muscle and soft tissue between her elbow and wrist were blown away. The police did not do this by accident – it was an intentional act of throwing it directly at her. Additionally police were shooting people in the face and groin, intending to do the most possible damage…”

On November 28, the Water Protectors Legal Collective (WPLC) filed a class action lawsuit against the Morton County Sheriff and other law enforcement agencies for use of excessive force against Water Protectors. Dundon v. Kirchmeier seeks damages and injunctive relief for injuries and curtailment of First and Fourth Amendment rights. The lawsuit argues that on November 20 over 100 people were injured on Backwater Bridge. 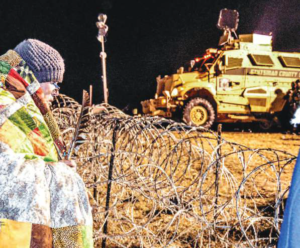 The complaint describes the excessive force with which the nine class representatives were met while peacefully protesting. Five are Native, including two members of the Lakota Nation. Vanessa Dundon of the Navajo Nation was hit in the eye with a tear gas canister that was shot by police directly at the crowd of Water Protectors. Jade Kalikolehuaokakalani Wool had two grenades blow up near her head, knocking her down, burning her face and sending shrapnel into it, and causing her to be hospitalized. Crystal Wilson was shot with a water cannon, tear gassed and shot with munitions.

David Demo was filming police when, without warning, they shot him with a water cannon, and then in the hand with munitions. He was hospitalized with broken bones and was told he would need reconstructive surgery. Gary Dullknife III saw a Water Protector knocked to the ground by a water can-non. As police sprayed her on the ground, he tried to move her away. He was shot in the chest, stomach and leg by impact munitions. Mariah Marie Bruce was peacefully protesting when police sprayed her with water cannons. She was then hit in the genitals with a grenade, and was hospitalized. 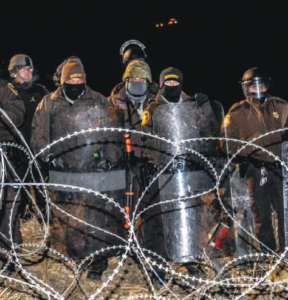 Frank Finan was taking pictures when he was shot in the abdomen and knocked to the ground by a rubber bullet. Israel Hoagland–Lynn tried to help two people who had been shot with water cannons and rubber bullets and was shot in the back of his head by an impact munition. He lost consciousness, was hospitalized, and needed 17 staples for a head wound. Noah Michael Treanor, while praying, was shot by the water hoses or cannon. Once on the ground, he was shot in the head by an impact munition. Bleeding badly, he was hospitalized.

“The civil rights violations that night were deliberate and punitive,” said Rachel Lederman, WPLC lawyer. “The Morton County Sheriff’s Department’s illegal use of force against the Water Protectors has been escalating. It is only a matter of luck that no one has been killed. This must stop.” The case will resume hearings on January 13, 2017 in the U.S. District Court of North Dakota, with Judge Charles S. Miller, Jr. presiding.

On November 4, prior to the violent Backwater Bridge assault, Honor the Earth asked Linda Coady, Enbridge’s Sustainability Director, (aka “the Indian Listener”) in text messages, phone calls email, and a very direct request to Enbridge CEO Al Monaco, to call for demilitarization of the law enforcement response and a full environmental impact statement, which is now finally being requested by the Army Corps of Engineers. Enbridge had plenty of opportunity to do the right thing in North Dakota, and chose not to.

Demain says Enbridge’s new problems have just begun, “Gauging tribal sentiment at last night’s Bad River Chippewa Community meeting on Enbridge’s proposal to abandon pipeline #5 which runs across Wisconsin and Michigan’s UP and across the Mackinaw Straights,(built in 1953 with a 50-year life expectancy) and replace it – Bad River tribal members said ‘gaawiin’, or NO!The oil flowing through those lines has been done so without a contract, or easement to do so since 2013. Bad River members said they don’t want a new pipeline through their reservation, they don’t want an easement payment nor do they want a donation for their food pantry as Enbridge offered. They want the aging Line #5 decommissioned and out now, and many said they will not tolerate a rerouted line through the ceded territories where their hunting, fishing and gathering resources are held.”

Mike Wiggins, former Tribal chairman of Bad River echoes Demain, “For Bad River the outdated pipe and its history present an apocalyptic scenario for our waterways and ultimately the Lake Superior shoreline around the Apostle Islands. Line 5 had its run, has seen its day and it’s time to move on and protect water.”

In the least, Enbridge has a very short term memory and is a bit stunned by the response to their flagship tar sands project. As Demain notes, “When asked ‘Are you planning on bringing your tanks to Minnesota?’ … Enbridge officials asked police to remove (LaDuke) from the public hearing, refused to answer the question, fled the meeting and cancelled their next day’s public hearing on the abandonment (in place) of the even older Line #3 and its replacement in the former proposed Sandpiper Route – you got a good idea of what they are now afraid of, and up against –they have no social license to do any-thing right now – and maybe better yet, ever again.”

It’s quite possible the legal problems are just beginning. Cheyenne River Sioux Chairman, Harold Frazier, released a video statement and letter to Larry Roberts, Acting Assistant Secretary of the Department of the Interior for Indian Affairs, and Tracey Toulou of the Office of Tribal Justice, to address abuses committed by the State of North Dakota and agents of the DAPL. That would include Enbridge.

Back in the north country, Bad River’s Mike Wiggins asks the direct question of Enbridge, “Will Bad River people be shot for trying to move forward with water protection, even though Enbridge has profited billions off our backs? ” That’s the question Enbridge. Others in Minnesota may wonder if we should plan for tanks and the MRAP (Mine-Resistant Ambush Protected vehicles) at Rice Lake or Sandy Lake.