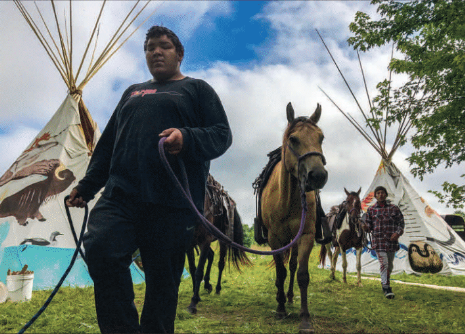 I am a traveler, for sure, but my love of the horse, the sound of horses on our Mother Earth, the chance to see a monarch butterfly, a back trail, and a ride with my grandchildren brings me to horse. And on Sandy Lake, it brings me to canoes. We have become a people who travel very fast, and many of us rarely stop to taste the fresh raspberries, harvest the medicines, or swim in our lakes. And perhaps we have forgotten our relationship to the natural world and the horse nation.

These past three weeks I have had the privilege of riding with great horsemen and women, mostly Dakota and Lakota who came to ride the proposed Enbridge pipelines – this time in Wisconsin, where Enbridge has two main lines – a triangle from Superior which stretches across Bad River, Lac Courte Orielles, and into Ho Chunk territory. The line turns towards the Great Lakes and to the proposed Line 3 route in Minnesota and through the heart of our manoomin (wild rice) territory. It is an epic time and in an epic time, we must be at our best.

I am inspired by courageous people. I believe that we all are, whether Delores Huerta, Nelson Mandela or the Crow Creek Boys who we came to know at Standing Rock. At 21, Mason Red Wing is young for a leader. Standing Rock changed his life as it did for many of us. We remember Mason and his brother Talon Voice from the early videos of the horses and dogs at Standing Rock. “Many of those who travel, saw the grammas being arrested and thrown to the ground by Morton County. …I went out there to protect the women and children, to put our bodies in front of them,” Talon Voice tells me.

“The dogs came straight for the horses, as soon as they released the dogs. We had to rive them back..” he said. Asked why they ventured so far into the woods and lakes to support us in our battle against Enbridge, Mason said, “You guys helped at Standing Rock, so I said why not return the favor and come support you.”

The men of Crow Creek, Rosebud, Cheyenne River, Sisseton, and Santee are seasoned and weathered for their young age. Their lives are much more tragic than many, yet their love of the horse and the restoration of horse culture inspires all and heals them.

We remember who we are when we see our relatives on horse back. It is not only a healing for Lakota people. What brings us together is often the spirit, the need for redemption, and the horse nation.

Tracy Hsu is from Elgin, North Dakota, a K-12 Librarian in the school system. She rides through Minnesota with us.“What really prompted me to go to Standing Rock was the kids on horses. I saw that on FB [Facebook],” said Hsu.Those kids are Mason Red Wing, Talon Voice, Kaler Kirkie, Judson Stadel, Jason Skinny Bull, Elliot, Matt Pumpkinseed, and many more.

Tracy brought two half Percheron, half thoroughbred horses to ride along the proposed Enbridge Line 3 Pipeline. “ I wanted to show my support. You guys came to North Dakota.” She pauses, “I also wanted to represent what you call ‘the Deep North.’ That there are a few of us that are here, who support you, who are conscious and are good people.” To Tracy, the violence of the oil industry was wrong. “When they sicked dogs on people and closed the highway, I was all in. You don’t get to do that to people… Our family ranch was on the Cannonball…” she added.

The Black Snake
I became committed to ride this 200 mile stretch from Rice Lake Refuge in Minisinakwaang to Rice Lake at Gaawaabaabaanikaag, five years ago. For those years I have ridden, always with other riders better than I, this route proposed for the pipeline. The Keri Pickett film,“First Daughter and the Black Snake” tells much of our story in the ride against the current of the oil, and our commitment to face Enbridge on a long battle.

A journey is not always in your planner. Each day is like a journey to me, that is if I am able to take the Creator up on the offer. We stop at the East Lake Powwow and probably for the first time in years, 20 horses circle through the Dance Arbor, and the host drum, Swampy Cree, sings a jingle dress song for the horses. After all, many jingle dress songs are related to horse songs.

Half way through the ride we got word that our Great Elder, Anna Gibbs, had passed on. The Dakota remembered her and asked to escort our Waasabiik, Anna Gibbs, to her final resting place at the family cemetery in Ponemah. Tracy Hsu drives her white percherons to carry the casket, and the riders escort Anna. The ride and the journey are beautiful.

Let’s be clear that what is being proposed in the failing days of the fossil fuel industry is a disaster of epic proportions. It is the same with the extreme mining proposals, the Confined Animal Feeding Operations, and the proposed Back Forty Mine of Wisconsin. They are all part of an extreme way of life, one which is not sustainable. A disaster of epic proportions, requires an epic answer, and courage. On the horse, and on the land and water, you find that courage.

Most of us have had little faith in a state or federal regulatory process. And it turns out that we are related. The proposed Line 3 would add more tar sands to Enbridge’s Mainline system, and would feed into a proposed 42 inch Line 66, called a “twin” to the Line 61 in Wisconsin. Another Snake, Line 5, heads through Bad River to the Straights of Mackinac where hundreds of water protectors gather. Line 66 crosses Ho Chunk territory, and for a time, Deer Clan Elder Bill Greendeer joins us on the ride.

The Enbridge Pipeline already cuts through one of thirteen Bear, Snake, Effigy and other mounds.

“… The Ho-Chunk Nation is no stranger to the damage caused by the oil industry to our sacred sites within our traditional territory. In its current capacity, the Enbridge Pipeline has already caused the irreparable damage to many sacred site on our homelands…”, Jon Greendeer, Executive Director of Heritage Preservation for the HoChunk Nation.
Eighty feet wide and 300 miles long, running the length of Wisconsin – through neighborhoods, businesses, farmsteads, forests, rivers – that is the swath of Wisconsin land controlled by Enbridge Energy Partners. Beneath that 80 foot swath are three pipelines carrying more than 2 million barrels of oil per day, and one pipeline carrying diluent pumped northward to extract oil from Canada’s tar sands. Now Enbridge wants more and up to 300 feet more of easement.

Unlikely Alliances
The pipeline makes unlikely allies, linked through a dysfunctional and outdated system of infrastructure. People come to see us at every stop, bring food, water, and community feasts. In Marshfield, Wisconsin (site of the largest Enbridge spill in Wisconsin) we are sweaty from horses, and welcomed at the Presbyterian Church potluck with hundreds of people, including landowners who were deeply concerned about the Canadian company being granted eminent domain rights to expand a line in Wisconsin. We are put up in Tweed’s farm, a newly elected Tribal Council man from Lac Couirte Orielle reservation, with whom we talk of local food economies, horses and a future.

Mary Hanson, built her home 30 years ago near Marshfield. Wisconsin. To her, “this is about property rights… I have paid taxes here as have many of my neighbors who will suffer similar issues and some who have it worse, they will lose their home. Truly my husband and I believe 80 feet is enough.”

The heavy lobbying of the Canadian pipeline company came to bear. In the summer of 2015 the Wisconsin legislature’s Joint Finance Committee, through the obscure Motion 999 process, changed Wisconsin’s eminent domain law to allow Enbridge to take private land through condemnations.

The proposed Sandpiper and Line 3 originally was slated to cross Lynn Mizner’s land, and after her she became intractable (ie: would not budge) Enbridge backed off and re-routed. So we camp in her yard and admire her sheep and her sheep dogs.

Each day is like a journey to me, that is if I am able to take the Creator up on the offer.
What Mason and the other horse people did at Standing Rock changed our perceptions of who we are and where we are in history. The truth is, we have become a people who live in a box, not only a house, a housing project, a city, but a computer, a phone, and a box, of our own social limitations.

I remember clearly Mathew King saying, “the only thing sadder than an Indian who is not free, is an Indian who does not remember what it is like to be free…” And in many ways that is this time. For the Anishinaabeg to be free is to make maple syrup, harvest medicines, net fish, harvest wild rice and live the life of these Northwoods and lakes. The Riders remind us to be free. The sound of the horse nation on our land reminds us of the larger life around us. I see the few monarchs, the quietude of our lakes, and am grateful.