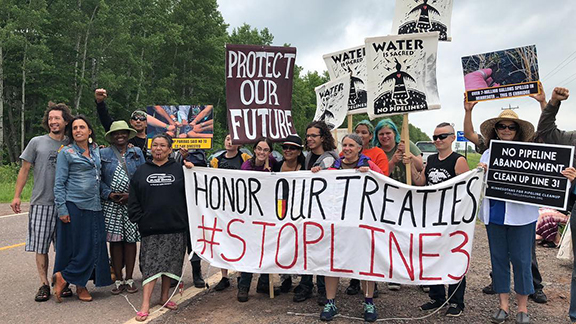 Apparently $5 million is the price to buy a pipeline route in Minnesota. In an unprecedented process, the Minnesota Public Utilities Commission (PUC) issued a 5-0 approval of the Certificate of Need for Enbridge’s Line 3 pipeline. In a second move, they approved tentatively a route permit for the company’s preferred route, awaiting modifications by the Fond du Lac Band of Ojibwe Tribe.

It is unprecedented that the PUC would override both the Administrative Law Judge and the Department of Commerce. The Department of Commerce found no need for the pipeline, and the Administrative Law Judge – after 68,000 testimonies and five times as much paperwork – had recommended against issuing a permit for a route. By the end of the day, Enbridge, the third largest corporation in Canada, had a 4 point spike in it’s stocks, in what has otherwise been a downward slide for the pipeline giant. Enbridge spent $5 million in lobbying the Minnesota PUC, despite huge opposition across the state.

While commissioners voted 5-0 for the certificate, they were divided over the route. In late June, the panel (in a 3-2 vote) agreed to run the line along Enbridge’s preferred route with modifications to avoid Big Sandy Lake. Outside the commission hearing room, White Earth tribal member Dawn Goodwin said the proposed pipeline route will travel through lands covered by an 1855 treaty.

“This is our time to assert those rights, and make them honor our treaties,” she said. “Our treaties are guaranteed under the Constitution. It’s the supreme law of the land. And they don’t get it, they don’t want to get it, and we’re all prepared to stand up for our rights.”
Legal counsel for Red Lake and White Earth bands Joe Plummer, along with attorneys from Fond du Lac, Honor the Earth and other intervenors plan to appeal this unprecedented decision, as well as begin the long legal and regulatory proceedings challenging permits which would need to be obtained by Enbridge.

This month’s deliberations were a painful example of a system of confusion. After five years of pipeline proposals, Commissioners were asking the bands to choose which route was the least detrimental to the Ojibwe. No Ojibwe band had come out in favor of a new pipeline; the choices being posed of running the pipe across Leech Lake and Fond du Lac again, or moving into Enbridge’s preferred route.

“It’s a lot like that moment in Sophie’s Choice, where Meryl Streep is asked which child she will send to the gas chambers,” Frank Bibeau, Honor the Earth attorney and Leech Lake resident said. “The Ojibwe are being asked which lakes and watersheds they will sacrifice to Enbridge.” The PUC deferred to Fond du Lac, which has been working with the Army Corps of Engineers to make this determination on the route.

As l00 degree temperatures mark the hottest year in history, and last year’s $600 billion in climate change related disasters, the decision is a bad one for the climate. Enbridge’s line 3 proposal is the equivalent in carbon impacts of bringing 50 new coal fired power plants on line. This is the only international tar sands pipeline project which has approval, since the Keystone XL pipeline has no route approval, making the Line 3 battle a ground zero in the battle over climate change.

Despite Minnesota’s commitment to move to renewable energy, Commissioners somehow felt that they had to approve the line, Commissioner Dan Lipschultz told the media,”It feels like it’s a gun to our head,” Lipschultz said.

Enbridge apparently was successful in convincing the PUC commissioners that they were holding a gun to their heads, in this case, the gun of a leaking pipeline system. Somehow, the perception that the state of Minnesota has no ability to remove a gun from a Canadian corporation’s hand is disturbing to many Minnesotans, who assumed a state regulatory authority would protect the remaining Minnesota waters from contamination.

“It’s a lot like having a spoiled child who tells you they will keep making a huge mess unless you give them a clean room and an ice cream,” one intervenor said. “In this case the PUC did just that, instead of acting like a parent, and trustee to the state, they gave the spoiled corporation a new corridor to pour oil into, and a pass on climate change.”

In 2016, thousands of Minnesotans and tribal members flocked to the Standing Rock Reservation in South Dakota to oppose the Dakota Access Pipeline. That moment is not yet here in Minnesota, but will be coming, if the regulatory system does not work.
Honor the Earth has announced the Welcome Water Protectors Campaign. Noting that Minnesota boasts signs to welcome hunters and fishermen to the north, Honor the Earth’s campaign includes billboards near Park Rapids and Backus, two coming epicenters of a looming pipeline battle on the ground as educational and cultural camps move forward in the north.

There are 300 miles of pipe not yet laid and 7 pipe yards, as well as over a hundred miles of proposed line upon state and county land, which are open to camping all year round. Stop Line 3.org is encouraging Water Protectors to learn of private and public campgrounds along the route, including Itasca Park, the headwaters of the Mississippi River, which sits less than a mile from the proposed route.

After the vote, Gov. Mark Dayton urged people to express themselves peacefully and said the PUC decision “only allows Enbridge to begin to apply for a least 29 required federal, state and local permits … construction cannot and will not begin unless Enbridge receives all required permit approvals.”

Those approvals by agencies like the Minnesota Department of Natural Resources and Pollution Control Agency must never occur, and legal challenges are pending. Enbridge however, hopes to begin construction this Fall or Spring, with a completion date by the end of 2019. That is a long way out, but in any case, it looks to be a bitter winter in Minnesota and for the Ojibwe.