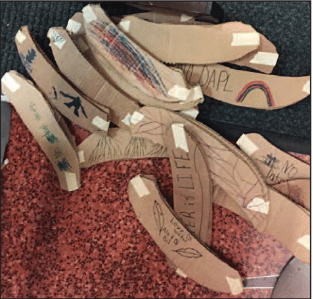 When did a cardboard canoe hat made by a child with the words “Water is Life” become something that needs to be suppressed for the public well being? Quick background: On March 7, the U.S. State Department held a public meeting in Bemidji to consider a border crossing for a Canadian oil tar sands pipeline.There was a strong turnout and over-the-top security. I wrote a blog for the Sierra Club critical of the event. What I didn’t know at that time was Sanford Center security in Bemidji did not allow young children to wear their handmade cardboard canoe hats inside. Frank Bibeau, an attorney for Honor the Earth, attended the Bemidji event and brought the issue to my attention. In an email exchange, Bibeau wrote: “I noticed that there was a table with confiscated items. On the floor was a bunch of canoe hats kids had made to wear at the public meeting. But the hats were taken from the kids and the security told them it was because they were signs.”

It is apparent that not all of the canoe hats had written words. Some of it is simply kid art. The question is, what lesson are the kids learning?

In a related incident, Indian Country Media Network (ICMN) reports that the National Museum of the American Indian staff recently asked Native American women to remove jackets for a similar reason. The women were in Washington, D.C. for the Native Nations Rise March, and their jackets “were adorned with patches and pins supporting water protectors and the Standing Rock Sioux Tribe.” Some of the patches simply said: “Mni Wiconi: Water is Life.”

The Smithsonian has acknowledged its error. The State Department and Sanford Center security have not. The National Museum for the American Indian spokesperson Eileen Maxwell said it was incorrect for security to ask the women to remove their jackets with the patches and pins, according to the ICMN story.“

This situation has been clarified with our officers, ”Maxwell added. “It is not the museum’s intention that people – and certainly Native people – ever feel unwelcome or unacknowledged here.”

Maxwell further noted that the Smithsonian does prohibit messages on clothing, but it does prohibit bringing in signs on posts and the displaying of banners of any nature in the museum.“

In this one instance, one officer misinterpreted this rule,” Maxwell said.

I have tried to get similar clarity on the decision to ban the canoe hats at the Bemidji event. I called and emailed Jeff Van Grinsven, head of security for the Sanford Center and Christopher Rich, Deputy Director for the Office of Policy and Public Outreach for the U.S. State Department’s Bureau of Oceans and International Environmental and Scientific Affairs. Van Grinsven said in an initial phone interview that the canoe hats were not confiscated, and referred additional questions to the State Department. I emailed him a photo of the canoe hats along with follow-up questions. He has yet to respond.

The State Department’s Rich said in an email. “As for security at the meeting, we relied on the professional advice of local law enforcement officials. I was not aware that children’s canoe hats were confiscated,and am not sure why this would have occurred.”

In the initial phone call with Van Grinsven, I asked him why the security was so tight at the event. He said it was because Enbridge’s Bemidji office was shot up earlier. (According to a Duluth News Tribune story, someone shot Enbridge office’s front door and windows on the evening of Feb. 22-23. No one was hurt. Enbridge is the company proposing the pipeline project.)

I, for one, had not heard about the Enbridge shooting and I am sure I was not alone. It would have been helpful for security to give people an explanation of the perceived need for metal detectors. Attendees also should have received advanced warning about the excessive screening – that bags, purses and even water bottles would not be allowed. Lastly, the assumption seems to have been a pipeline opponent did the shooting. There does not appear to be any evidence that was the case, at least from media accounts.

To repeat from the earlier blog, the format was flawed. Attendees could ask State Department staff questions. But there was no public discussion, no opportunity to speak directly to decision makers or hear others testify. People had to submit comments in writing or speak privately to a stenographer.

I sent the State Department a link to the blog which outlined these criticisms. Here is part of Rich’s email esponse: “Thank you for sharing your blog and your concerns about the March 7 Bemidji meeting with us.

I am disappointed and sorry that you felt mistreated,and that you thought that the meeting failed to engage the public. We designed the open house format of the event specifically with public engagement in mind. The purpose of the meeting was to help explain the findings of the environmental impact statement(the Line 67 Draft SEIS), and to elicit public comments on the proposed project. We brought a number of experts who worked on the statement so that they could engage the public. From what we observed during the meeting, they were able to do this. We received a large number of comments.”

This response is dismissive. He doesn’t acknowledge something that shouldn’t be that controversial – that people want to speak to someone in charge about their concerns. The State Department says, “from what we observed,” the public was successfully engaged. That’s not a very scientific poll. I am sure if they would have surveyed those who attended, they would have received a different answer.