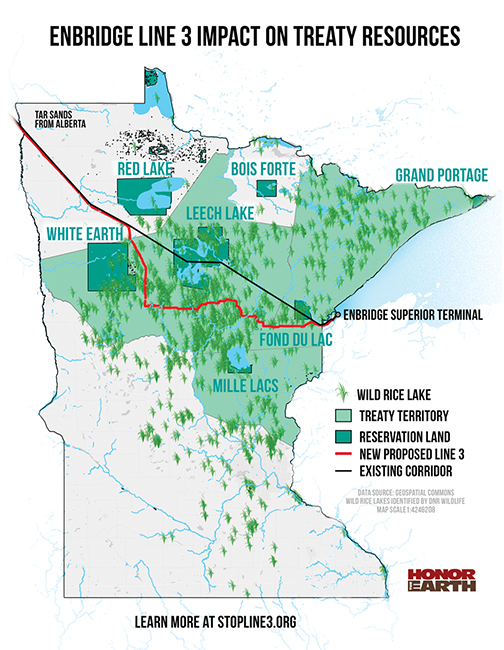 November 20. 2020: Army Corps of Engineers issues 404 permits to cross waters of Minnesota, based on the findings of the Minnesota Pollution Control Agency. The Army Corps did not do an environmental impact statement on the water crossings, or potential of a spill into Lake Superior, instead relying upon the state’s review.

The company is ready, it has been for years. Staged on the edge of Ojibwe territory are piles of pipes, many of them sitting there for four or five years. Next to those pipes are now matting yards, that’s the big 8 by l0 inch wood planks that big trucks drive on in wetlands. And then there’s the equipment yards. Every kind of machine which can gouge, eat forests, or drag bigger equipment is sitting in yards. That’s to say, equipment yards span from Their River Falls to Floodwood, and then some, full of things which destroy ecosystems. They all sit and wait. Hotel rooms are filing up, the word is out on the street.

December 2: Enbridge begins construction on Line 3. 4200 workers begin to pour into the state, most of them out of state union pipeline workers. Palisade, a small town of l00 looks like it’s occupied: 400 pipeliners and 200 water protectors.

December 5: Tania Aubid and Winona LaDuke visit the ceremonial lodge on the shore of the Mississsippi River. There’s a survey stake for the pipeline project in the middle of the lodge. Fond du Lac has the contract for a cultural monitor who is supposed to be out ahead of any destruction by Enbridge. There’s no cultural monitor around. We sit there with Aitken County Sheriff Dan Guida and Department of Natural Resources (DNR) Captain Proctor, waiting for Fond du Lac’s Cultural Monitor, to inform us “if we are sacred are not.” We are told that they will be at the Mississippi River in l5 minutes, then 30 minutes and then, not today. We never saw a cultural monitor from the Fond du Lac Band. Our Tribal Historic Preservation Officer was told she would be arrested if she went to the lodge. Still no word from Fond du Lac or Enbridge. I was cited for trespassing on “public lands” to be at my lodge by Aitken County.

December 6: five more people cited by DNR for going to the lodge.

December 12: Arrests. A delegation of Minnesota State Representatives – led by Senator Elect Mary Kunesh Poudin and Representative Elect Heather Keeler come to Palisade. Another delegation comes a week later. All to see what is going on.

December Solstice Gathering: Renewal of the One Dish, One Spoon Treaty between the Anishinaabe and the Haudenausaunee. Joe Hill of the Seneca Nation is presenting a wampum belt to the Anishinaabe women who have gathered to protect the water – today it’s me, Tania Aubid and Morning Star Goodsky. The wampum became part of our Great Law of Peace, the Haudenosaunee, People of the Longhouse. The last time the treaty was renewed that I know of was in l706 near what is now Montreal. It’s called the dish with one spoon, also known as the one dish, one spoon, what it means is we can all take from the dish, we can all share the bounty that mother provides us.

The spoon is used because we can all reach into the dish, but we don’t want to reach into the dish with a sharp a sharp instrument, because if there’s a knife there and someone gets cut, then that person will have bad feelings towards the others that are taking from the dish.

The times were epic then as they are now. The European colonists took many of the wampum belts, “They were taken from us, many of them were held for a month for over one hundred years, and they thought that we would forget,” Hill explains. “What they meant, but they didn’t realize that the oral tradition is so strong among our people. There was no way we would forget. So I was there when many of our belts came back to the Onondaga Nation, where they’re the caretakers of our most sacred belts. The Hiawatha Belt being one of them, but you see that became a flag in 1990 when the Iroquois nationals needed a flag to fly, when they went to play on the international level of the game, lacrosse, which we gave to the world, you know, our games alternative to war.

That’s how we settle our disagreements, because with the Great Law of Peace, we buried our reasons for war, for killing each other. So we settled it with a game of lacrosse.”

Before I came out here. I asked a man in western New York who recreates these belts if he had a replica of the one disk with one spoon and he said, I do. And then he said, as he was making it, had to make one a little bit better. So the belt that I have.

The Iroquois delegation gives the Ojibwe women the belt. And explains, “These are a clay bead, but the beads that represent the spoon are from the 17th century. So these beads would have existed before you left and came out here on your migration to where the food grows on the water.” Joe looks to the Mississippi then, we are on the shore of the Mississippi River.

Then we eat beaver tail hominy soup, and our treaty is reaffirmed. This time, there are a hundred others observing, and they too eat the soup and affirm the One Dish One Spoon Treaty.

December 24: Minnesota Public Utilities Commission denies the Red Lake and White Earth Nation’s motion to ask for a stay of construction based on the numerous challenges to the regulatory decisions and the pandemic.

December 28: Water Protectors, and local citizens face off with Cass County Sheriff. And there are friends in front of the Enbridge Pipe yard in Backus. Emma the Water Protector is high aloft in a tripod. It’s 10 degrees out and the three hours is punctuated by music and chants in abundance. More people come and bring Christmas cookies.

Learn more about Line 3 at: https://www.stopline3.org