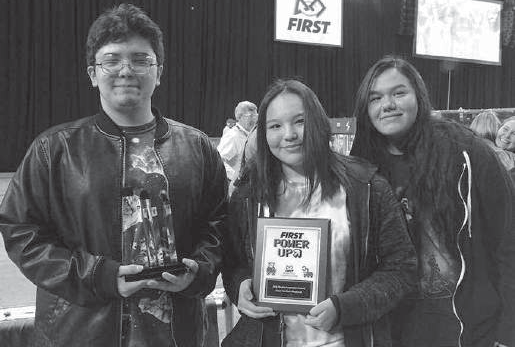 The Ogichidaag Team were awarded the Rookie Inspiration Award which “Celebrates a rookie team’s outstanding success in advancing respect and appreciation for engineering and engineers, both within their school, as well as in their community.” The Ogichidaag Team includes Quentin Chaboyea, Diamond Cloud, and Calista Nichols. Red Lake Teacher Tami Liberty is the advisor. Red Lake High School sponsored the team. There were 47 teams and 3 rookie teams, including Red Lake, that participated. The Cass Lake/Bena girls Team #3134 was the recipients of the Gracious Professionalism Award. (By Michael Meuers) The Bemidji Police have added the words, “To Protect and Serve” written in the Ojibwe language to all City of Bemidji police cars. Bemidji Police Chief Mike Mastin said, “We added a decal that affirms our purpose in the Bemidji community. The decal simply states “To Protect and Serve” but then also has it printed in Ojibwemowin “Ganawenjigeng miinawaa Naadamaageng.”

The move is part of the Bemidji’s Ojibwe Language Project, which has over 200 businesses and organizations that have agreed to post some kind of Ojibwe/English signage at their place of business. The City of Bemidji was one of the first to participate posting signage at City Hall, the Sanford Center, and the Chamber Building. Every school in the Bemidji School District including charter schools, BSU and the Vo-Tec post Ojibwe signage. Sanford Health and Beltrami County also are participants along with scores of small businesses.

According to the Tribal Tobacco Use Project (TTUP) survey, the rate of commercial tobacco use among the urban American Indian population in Minnesota is 59 percent. This compares to the smoking rate of 14 percent among all Minnesota adults. The new program will include the following specific tools to help participants quit: 7 coaching calls to provide additional support; 12-week regimen of nicotine replacement therapy; A team of trained coaches. People who want to find out more about the new program can call 1-888-7AI-QUIT or visit online at aiquit.com.