On September 23rd, the American Indian Community Housing Organization (AICHO) unveiled Duluth’s first public Indigenous mural. The mural, which has not been given a name yet, is on the new Dr. Robert Powless Community Center in downtown Duluth. Created by Votan Ik (Mayan/Aztec), with apprentices Derek Brown and Leah Marie, it was completed in collaboration with the Native environmental-advocacy organization Honor the Earth, and help from more than 40 community members.

The mostly red and black mural displays a traditional jingle dress dancer – a dance known for its connections to health and healing. According to the artist, “America suffers from historical amnesia” where “the original inhabitants of this paradise still suffer the after effects of colonialism.”

Ik has created mural art for the American Indian Center in Minneapolis, Minnesota and the Little Earth of United Tribes. The mural was made possible by Honor the Earth, Clearway MN, Fond du Lac and SHIP. 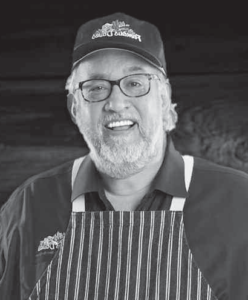 Famous Dave Anderson was inducted into the Barbecue Hall of Fame® at the American Royal in September. The award is BBQ’s highest honor.

“To be inducted into the hallowed shrines of BBQ at the American Royal is the pinnacle. This is what any pitmaster dreams of. But it isn’t about me. It’s always about making other people happy with my BBQ,” said Anderson in a press release.

Famous Dave (Ojibwe) started his BBQ business in 1996 when he opened the first Famous Dave’s BBQ Shack in Hayward, WI. In September 1996, Famous Dave’s BBQ & Blues opened in Minneapolis, one of his many BBQ shacks through out the country. He has published several cook books, won the SMOKED Champion in the Discovery Channel/Destination America TV Series, won Oprah’s Angel Network Award for leadership developments work with at-risk Native American youth, and his cookbook Rib-O’Licious proceeds help disadvantaged Native American youth. He has won numerous others awards for his food and his dedication to helping the Native American community.

The Rebuilders will convene for four structured sessions during which they will also develop action plans to share knowledge with peers and their respective Tribal governments. The sessions involve partner organizations and individuals with expertise in nation building, organizing, and issues specific to Indian Country. The new cohorts are listed below by tribe.

The next round of applications for the tenth cohort of Rebuilders will be announced in the summer of 2018. For info, see: www.nativegov.org/news/native-governance-center-bush-foundation-announce-ninth-cohort-native-nation-rebuilders.

The First Nations Development Institute announced the selection of 22 American Indian organizations and tribes to receive grants through its Native Youth and Culture Fund for the 2017-18 funding cycle. The grants total $410,000. To date this fund has awarded 351 grants to Native youth programs throughout the U.S., totaling $5.96 million.