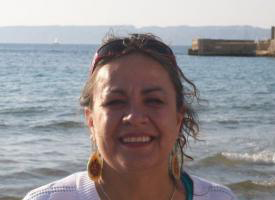 Leslie graduated from Red Cloud (S.D.) High School in 1980, where she was a varsity cheerleader and academically excelled in state oratory competitions. Leslie attended the National College of Business, Oglala Lakota College, and graduated with her Bachelor’s in Elementary Education from Black Hills State University in 1991. Leslie began working in the Rapid City (S.D.) School System Indian Education programs at Wilson School, while still in college. After graduation, Leslie taught at Horace Mann School, Rapid City, and then at Wounded Knee District School in Manderson, S.D. Leslie moved to the Twin Cities in 1994 and continued teaching at the Red School House, American Indian Magnet, The City, Inc., and Mexica Multicultural Education Charter School. She was the director of the Teen Indian Parent Program for the Division of Indian Work for a number of years.

Leslie has always been a talented Native artist, and owned a small business she operated at the time of her death, Akisni Regalia. She recently participated in an indigenous cultural presentation in Paris, France, in 2011. Leslie played a mean game of Scrabble, had a ready sense of humor, devoted herself to the red road, was extremely active in AA, and was on the verge of receiving her three-year token.