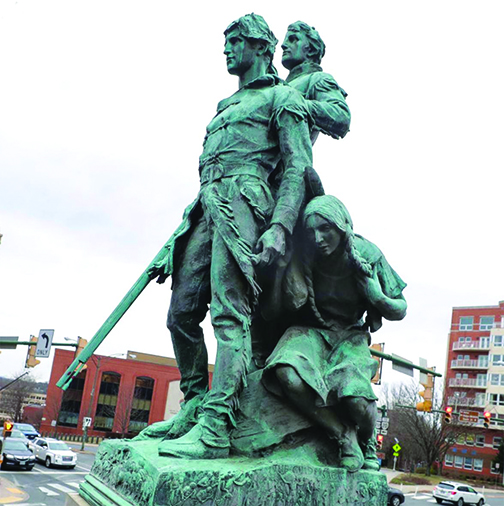 ‘The worst we have ever seen’: Statue depicting Sacagawea being removed

Charlottesville, VA (AP) – The city council in Charlottesville, Virginia, voted last month to move a statue depicting Sacagawea, the Native woman who helped the Lewis and Clark expedition in the early 1800s, at the feet of the White men assigned to lead it.

The vote came after a lengthy work session on November 15, during which council members heard from descendants of Sacagawea’s Shoshone family. Rose Ann Abrahamson, a citizen of the Shoshone-Bannock Tribes, said the depiction of her ancestor as subservient to men was dehumanizing and offensive.

“This statue in Charlottesville was the worst we have ever seen,” Abrahamson said during the session, The Charlottesville Daily Progress reported.
The council plans to move the statue to a new site that hasn’t been identified, National Public Radio reported. It will be replaced by a more accurate portrayal of Sacagawea.

The task force will be overseen by Attorney General William Barr and Interior Secretary David Bernhardt. It will develop protocols to apply to new and unsolved case and create a multi-jurisdictional team to review cold cases.

The announcement comes days after Barr said the Justice Department would invest $1.5 million to hire specialized coordinators in 11 U.S. attorney’s offices with significant caseloads from Indian Country to come up with ways to better respond to missing persons cases and committed FBI resources. The agency will also would do an in-depth analysis of federal databases and its own data collection process.

The National Institute of Justice estimates that 1.5 million American Indian women have experienced violence in their lifetime, including many who are victims of sexual violence. On some reservations, federal studies have shown women are killed at a rate over 10 times the national average.

Trump was joined by representatives of the Navajo Nation, which extends into New Mexico, Arizona and Utah; the Crow Nation in Montana; and the Mille Lacs Band of Ojibwe and the Fond du Lac Band of Lake Superior Chippewa in Minnesota.

Fond du Lac Chairman Kevin DuPuis highlighted women as caretakers of children and tribal villages and said it’s imperative that they be protected and not treated as second-class citizens.

The Seattle Indian Health Board urged the Trump administration to keep in mind that a majority of American Indians live off reservations.

“This action is a step in the right direction, but we look forward to seeing additional steps that are inclusive of urban Indian people,” the board’s chief research officer, Abigail Echo-Hawk, said in a statement.

The task force expires after two years. It is expected to report on its work in a year.

Court to rehear law on adoptions of Native American children

New Orleans, LA (AP) – A federal appeals court announced Nov. 7th that it will take a second look at an emotionally fraught lawsuit governing the adoption of Native American children.

In August, a three-judge panel of the 5th U.S. Circuit Court of Appeals upheld the Indian Child Welfare Act of 1978. It was a defeat for non-Indian families in multiple states who had adopted or sought to adopt American Indian children.

On Nov. 7th, the New Orleans-based court said a majority of its active judges have voted to re-hear the case. It means Native American tribes and the federal government will again have to defend the law, which they say is critical to protect and preserve Native American culture and families.

A hearing date has not been set.

The lead plaintiffs in the lawsuit challenging the law are Chad and Jennifer Brackeen, a Texas couple who fostered a baby eligible for membership in both the Navajo and Cherokee tribes. The boy’s parents voluntarily terminated their parental rights and the Brackeens petitioned to adopt him. After legal battles, they were able to keep him when a placement with a Navajo family fell through. They hope to adopt his younger half-sister, according to briefs.

Other plaintiffs include Jason and Danielle Clifford of Minnesota, who were unable to adopt a child who lived with them after having been shuttled among foster homes.
Texas, Indiana and Louisiana have also joined the lawsuit, siding with the would-be adoptive families.

“Tribal nations are still reeling from generations of our families being separated,” Tyson Johnston, vice president of the Quinault Indian Nation said in March after a 5th Circuit hearing. “So, even though we’ve had good policy like the Indian Child Welfare Act, it’s going to take us many more generations to rectify those past wrongs.”

Opponents of the law called it an unconstitutional race-based intrusion on states’ powers to govern adoptions. But two members of the three-judge panel that ruled this year disagreed.

The opinion written by Judge James L. Dennis said the law’s definition of an “Indian child” is a political classification. It said the definition is broad, “extending to children without Indian blood, such as the descendants of former slaves of tribes who became members after they were freed, or the descendants of adopted white persons,” Dennis wrote.