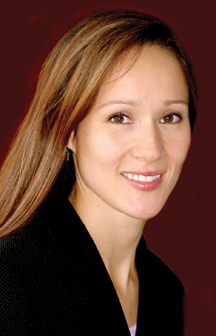 Native Report, a weekly TV news magazine produced in Duluth, has been renewed for a fourth season and is scheduled to start in February. The program is produced for both Native and non-Native viewers and is offered for free to public television stations across the country.

Native Report, co-hosted by Stacey Thunder (Red Lake Ojibwe) and Tadd Johnson (Bois Forte Ojibwe), is an entertaining and informative TV news magazine that celebrates Native American culture and heritage, and discusses issues with some of the most influential leaders today.

Juli Kellner, Executive producer at WDSE-TV in Duluth, says story ideas come from people who call or send emails to Native Report. She, Thunder and Johnson then collaborate to make selections and put the shows together.As part of production, Thunder and Johnson each do their own writing as well as the reporting and interviewing.

the stories of Native people. “The Native community has been

under-represented in popular media, and if there is coverage, it tends

to be negative,” Thunder said. “So Native Report shares the positive

and dispels the myths. Viewers get to know all of who we are.”

The fourth season will include programs that deal with topics such as:

throughout Indian Country, even when it covers the challenges. The

program takes a particular interest in efforts to deal with tough

issues. “We want to examine what folks are doing that works, what

revitalization, economic development, and other issues. We want to

The program grew out of an increasing concern with the pervasive

coverage of negative stories. “The idea for the show came from both the

WDSE Community Advisory Board and Tadd,” Kellner said. “It was his

brainchild, as a response to all the stories about drug abuse and

violence in Native communities. The majority of reporting was only

covering negative events, which are relevant but not always

representative of everything that is happening.”

the shows. They were colleagues and lawyers for the Mille Lacs Band of

Ojibwe at the time. “It was his dream to have a show like Native

episodes. After evaluating them, they made some changes to the format

and put out a full first season. Native Report’s season grew to 15

Seasons One through Three include such stories as students learning the

Dakota language, tribal preparations for disasters and other threats,

the new National Museum of the American Indian

recovery of walleye fish in Red Lake. In the 1990s, tribal leaders had

collapse in the fish population. It was hard to shut people off from

their way of life and a resource they used to feed their families.

However, the tribe was able to cooperate with the Minnesota Department

ten-year moratorium because the fish population grew so fast. Thunder

values the story as an example of the important and inspirational

accomplishments in the Native community.

Services, the Indian Child Welfare Law Center, and as a tribal attorney

for the Red Lake Band, and corporate attorney for the Mille Lacs Band

of Ojibwe Indians. She received a B.A. in psychology from Hamline

University and a J.D. in 1998 from William Mitchell College of Law. She

an organization dedicated to promoting healthy lifestyles in the Native

Johnson is currently Solicitor General for the Mille Lacs Band of

Ojibwe where he works to protect the Band’s interests at the local,

state and federal levels. He also worked for five years with the U.S.

House of Representatives, ultimately becoming the staff director and

counsel for the House Subcommittee on Native American Affairs and in

1997, was appointed to chair the National Indian Gaming Commission by

then President Bill Clinton. He earned his bachelor’s degree from the

Native Report is aired from California and Alaska, to Florida and New

York. Many stations in the Midwest also carry the show. Each individual

station decides on the program’s slot in its local lineup, so viewers

should check their TV listings.

The current program is free to any interested public television station

and is funded by grants from the Shakopee Mdewakanton Sioux Community,

The support from the Shakopee Mdewakanton Sioux Community allowed WDSE

to make the programs available in high definition for season four. It

Kellner said. “We are now ready for the digital transition.”

Response to the show has been supportive. The station often receives

emails congratulating them on its success. Thunder hopes Native Report

continues breaking stereotypes and allowing viewers to get to know

Native individuals and tribes for many seasons.

not know anything about them,” Thunder said. “Learning what Native

your local public television station and ask them to air it. If you