Native Americans and allies gathered outside the U.S. Bank Stadium in Minneapolis on Oct. 24 to protest the Washington Redskins’ racist name.

The rally was organized by The National Coalition Against Racism in Sports and Media, which featured speakers like Lt. Gov. Peggy Flanagan, a member of the White Earth Band of Ojibwe.

According to MPR News, Flanagan said, “When you take humanity away from our people, you don’t have to pass policies that are supportive of our people and communities. You can roll right over our communities,” Flanagan said.

Another speaker was Minneapolis Mayor Jacob Frey who said when he was young, he didn’t understand what the football team’s name meant. “… I’m sure there’s a whole bunch of other little kids running around, that are also not recognizing that immediately. And so it highlights the need for the change,” Frey said.

Frey is referring to the violent and racist history of the word, when the U.S. paid settlers to hunt down and kill American Indians. An ad from an American newspaper in the 1850s reads, “The state reward for dead Indians has increased to $200 for every red-skin sent to Purgatory,” and “This sum is more than the dead bodies of all the Indians east of the Red River are worth.” 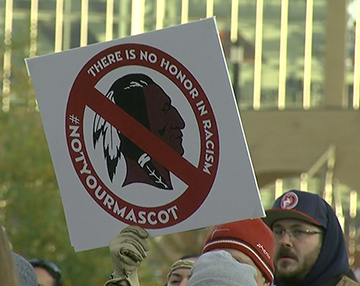 Many Native Americans say the name is more offensive than “Indians” or “Braves” because it was a word white people used when murdering Native Americans for bounty.
Rep. Betty McCollum (D.-Minn.) called Washington’s team name as a “racist slur” on the floor of the House of Representatives. “It’s remarkable that the NFL commissioner and owners continue to sanction the racist and shameful use of the term Redskin to describe Native Americans and then profit from it,” said McCollum, a co-chair emeritus of the congressional Native American Caucus who attended the protest.

Clyde Bellecourt, founder and director of the American Indian Movement and cofounder of NCARSM, said.“The name is not positive or respectful. It is the very opposite, and instead encourages a dangerous caricature of what it means to be Native American.”
Among the marchers were Minnesota Lt. Gov. Peggy Flanagan (Ojibwe), along with Minnesota state Reps. Mary Kunesh-Podein (Sioux) and Jamie Becker-Finn (Ojibwe) and Minneapolis Mayor Jacob Frey.