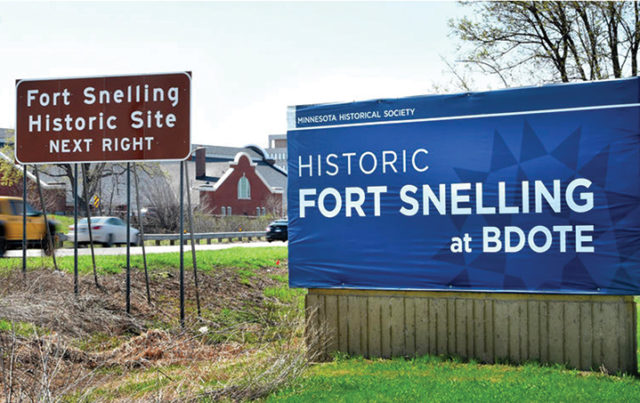 The usual suspects have gotten their feelings hurt – again – because the Minnesota Historical Society has pointed out that Minnesota history didn’t begin with them.
KSTP reports that the latest “controversy” is over signs that went up at Fort Snelling historic site that say “Historic Fort Snelling at Bdote.” The old signs said only “Historic Fort Snelling.” Bdote is the Dakota word meaning the point at which two waters meet.
See pearls. Clutch pearls.

He said he’s also heard from veterans who are upset by the signs, and consider it “revisionist” history.

“I think it’s a rewriting of our history and I’m not in favor of it,” he said.

Nobody is rewriting anything, of course. Nothing was removed from the original sign. Fort Snelling is still there. It’s just that additional information has been added.

The Minnesota Historical Society says the name hasn’t been changed. The Society is simply expanding the stories it’s telling.

“Lots of history has happened there over many generations,” said the director of government regulations for the organization. “We want to tell all of those stories, and by telling those stories we absolutely are not diminishing military history or the contributions of veterans.”

A $30 million revitalization project is underway at the fort. The lawmakers are supporting a bill to cut the Historical Society’s budget. Officials with the Society say up to 80 people could be laid off.

“I want the Historical Society to come to the table and talk to us,” Newman said. “And be willing to listen to what our concerns are and act on those concerns. And to date, in my estimation, they have not.”

Nothing irks some EuroMinnesotans like accurate history. And nothing is too small for the daily dose of outrage. Just look at WCCO’s Jason DeRusha, who posted an innocuous photo of a beautiful sunrise over Bde Maka Ska this week and found, as he described it, “a surprising amount of rage” in the accompanying comments. That shouldn’t have surprised anyone, actually.

Bde Maka Ska, of course, was previously Lake Calhoun, in honor of John C. Calhoun, who tried his best to keep slavery alive in the nation. The lake’s name was restored to its previous name in January 2018 in recognition that an accurate historical name is more important than honoring someone who described slavery as a positive good.