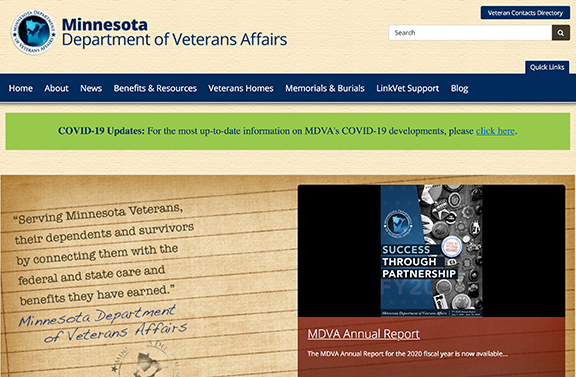 For Jeff Isachsen, like for a lot of Native Minnesotans,  it was far easier to become a member of the armed services than an employed civilian in the midst of a pandemic and recession. With the help of state programs, the transition can be made even in these trying times.

Isachsen, 46, worked for several years at Mystic Lake Casino for the Shakopee Mdewakanton Sioux Community after leaving the Marine Corps in 2003. A disabled veteran, he used veterans’ benefits to attend the University of Minnesota.

“I graduated in May. It was scary. I wondered what I was going to next,” he said.
Most everyone knew the magnitude of the COVID-19 pandemic at that point. The Minnesota and national economies were quickly falling into recession. People were losing jobs and businesses were closing shops. Employers held back in hiring while watching economic developments and surging numbers of virus infections.

A state employee with the Minnesota Department of Veterans Affairs, a member of the White Earth Nation, got Isachsen connected with Yogi (Terrence) Montry, a veteran employment representative with the Department of Employment and Economic Development (DEED). He works within DEED’s Native American Project that bundles various programs to help Native veterans find work.

Isachsen became one of Montry’s cases. It worked. He is now a Wells Fargo loan officer.
Montry is a member of the Cheyenne River Sioux Community in South Dakota and the White Earth Ojibwe Nation. He is a Marine veteran as well.

All 26 caseworkers and employment representatives working the Native programs at DEED are Native American veterans, Montry said. This helps to assure that relationships during training, preparations for seeking employment, and finding various other services the veteran might need are culturally sensitive, he said.

“If a women veteran is uncomfortable working with me, we have Native women here as well.”

Statistics kept by the Minnesota Department of Veterans Affairs show why that is important. Keeping alive a warrior tradition, 25 percent of able-bodied Native Americans enlist in the armed services compared to only 3 percent of the general U.S. population. Despite this service, less than 50 percent of American Indian veterans apply for the federal and state benefits they have earned.

“We pivoted to virtual services (on the Internet) with the COVID. We are doing it now safely and virtually,” said Ray Douha, a Navy veteran who is director of the Veterans Employment Program at DEED, during a conference call interview. “But we are not reaching everyone we would like.”

Computer access is difficult for veterans now that most libraries are closed. Providing virtual services for the homeless is really a stretch, said Douha and Barry Platt, an Army veteran who is field operations manager for the program. Social distancing to stay safe keeps people from using friend’s computers and even telephone service.

The COVID pandemic causing veterans to remain isolated and being unemployed both expand the need for health services in tandem with employment services, said Montry.
Despite such challenges, Douha, Platt and Montry can point to successes during the past year.

Reviews of joint DEED and Department of Human Services (DHS) veterans’ programs for the fiscal year ending on June 30, which doesn’t account for the past six months, showed 703 veterans receiving case-managed services. Of them, 16 percent were Native veterans or other people of color.

Nearly half of these veterans (47 percent) had a disability or other barrier to employment, 54 percent were between the age of 25 and 49, 13 percent were women, 16 percent were ex-offenders, and 12 percent were homeless.

Of these veterans served by state programs, 15 percent had only had only high school or GED diplomas while 40 percent had bachelor or higher degrees.

Granted, the fiscal year review doesn’t show what has happened in the last half of year 2020. There was, however, favorable results heading into the virus surge.

The review showed that 86 percent of veterans receiving case-managed services successfully exited the programs with an average wage of $22.18 per hour. That is $7 an hour more than the generally accepted cost of living rate for Minnesota, and $4 more that the cost of living for a family of four.

For information on available veteran services, see www.mnworkforceone.com and https://careerforcemn.com/veterans-resources. Minnesota’s other veteran services and benefits can be found at https://mn.gov/mdva.