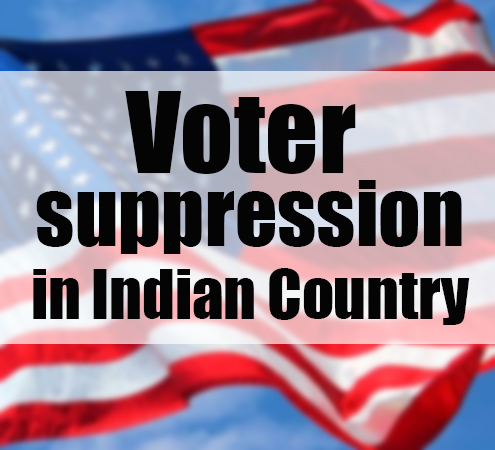 Wow, North Dakota, you never cease to amaze me. Less than three weeks before Election Day, the state has new laws which may disenfranchise up to 5000 Native voters. Now, I remember that the US Post Office cut off postal service to a lot of rural areas over the past few years, but that should not mean that these people cannot vote. Right now, looks like North Dakota is intent upon keeping it’s status as “the Deep North”.

Under the requirement the Supreme Court just allowed to take effect, North Dakotans can’t vote unless they have identification that shows their name, birth date and residential address. Since most of the reservations have only a post office box service, that’s a pretty tall order, and embarrassing if you all want to call yourselves a democracy.

Native people may represent five percent of the population, but it is clear that we have voted, or tried. Nationally, there are more Native people voting and running for office than ever, and Ruth Anna Buffalo is one of a handful in North Dakota. It’s also clear that Senator Heidi Heitkamp, the incumbent, certainly counted on these votes.

According to the Native American Rights Fund, Native people more than twice as likely as other voters to lack a form of identification acceptable under the new law. The district court that ruled earlier this year found that about 5,000 Native American voters did not have the necessary identification, and that about 2,300 of that number also lacked supplemental documentation. What we know is that in 2012, Heitkamp won by fewer than 3,000 votes.

The state has suggested that tribal members can call 911 and get an address assigned for the election. As the New York Times reports, “In a letter to tribal leaders, the secretary of state’s office wrote that any voter without a residential address could contact their county’s 911 coordinator, describe the location of their home and, quickly and at no cost, be assigned an address that the coordinator could confirm in an official letter. The voter could then either use that letter to obtain new identification or present it at the polls alongside an ID card that would not have been sufficient on its own.”

And they maintain that no eligible voter will be disenfranchised.

Four Directions, an advocacy organization, came up with its own plan. The organization has suggested that tribal officials could be at every voting location on the reservation and issue identification letters on tribal letterhead. This could utilize an established addressing system for rural areas to assign residential addresses on the spot. Oliver and Barbara Semans are co-executive directors of Four Directions.

In the meantime, the Standing Rock Tribal Government is hosting a set of meetings to help tribal members vote, and Natives across the state plan to push harder than ever.

If it makes you all feel better, it’s hard to vote on White Earth reservation as well. There is no in-town polling for the majority of the tribe’s villages – including White Earth, Callaway and Ogema. Residents of those towns, if they did not receive a mail in ballot, can join residents of most other townships, and drive the 30 plus miles to vote in Detroit Lakes at the County Recorders office. That’s open every work day until November 6. And, in an effort to turn out voters, Honor the Earth has put a Rock the Vote bus on the road – bringing tribal members into town to vote. Despite some initial confusions and rejections at the county office it seems that tribal voters, with a bit of persistence, can register.

The Deep North it may be, but remember Spring will come.