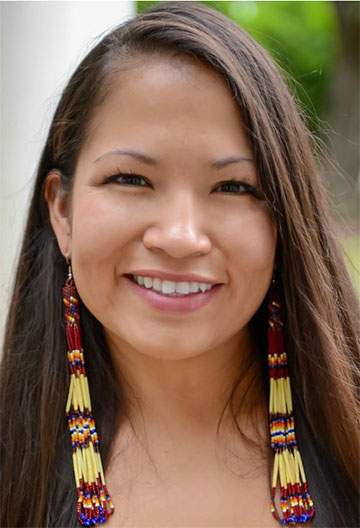 Founded in 1990, Native Americans in Philanthropy (NAP) strives to power reciprocity and investment in Native communities. Eagle Heart’s experience working at small nonprofit organizations and corporate tribal organizations, as well as large international non-governmental organizations has built upon her knowledge to understand the essential need for communication, education, mutual respect, collaboration, and advocacy.

Eagle Heart is an accomplished non-profit executive, having worked as Team Leader for Diversity and Ethnic Ministries and Program Officer for Indigenous Ministry at The Episcopal Church, New York, NY. Under her leadership, The Episcopal Church became the first major denomination to repudiate the Doctrine of Discovery focusing programmatic education and advocacy on accurate history education, cultural teachings, healing and asset based community development. She has excelled at activating key leaders from grassroots to corporate level through capacity building – skills she plans on bringing to her new role at NAP.

Eagle Heart holds an Masters in Business Administration from the University of Phoenix, San Diego, CA; a Bachelors of Arts in Mass Communications, and a Bachelors of Arts in American Indian Studies from Black Hills State University, Spearfish, SD. She is a 2014 recipient of the National Center for American Indian Enterprise Development’s “40 under 40 Award”. She is enrolled at Pine Ridge Indian Reservation in South Dakota.

New Native Theatre’s founder and artistic director, playwright, Rhiana Yazzie, announced that the company is now a non-profit organization. New Native Theatre’s presence in the sea of over 100 theatre companies in the Twin Cities is an opportunity for more Native artists to see their ideas come to life on stage.

New Native Theatre is celebrating its new status with a review of the six years they’ve been producing plays and events. It will feature excerpts from The Dreaming Bundle (2010), 2012: The Musical! (2012), Native-Somali Friendship Play (2013), and Native Man the Musical (2015) among other events that have happened in New Native Theatre’s last six  years. The 2010 and 2011 winners of Franklin Avenue Indian Idol will return along with the New Native Theatre Actor Ensemble and surprise guest appearances.

The celebration will take place at October 30, starting at 7:30pm at the Bedlam Lowertown, 213 4th Street East, Saint Paul, MN. Ticket price $20. No one turned away. For more info, see: at www.newnativetheatre.org.

First Nations Development Institute (First Nations) has awarded four grants to Native nonprofit organizations and two grants to tribes through its Native Arts Capacity Building Initiative (NACBI). The initiative is part of a three-year project targeting Native nonprofits and tribal government programs serving the field of Native arts and artists in the four-state region of Minnesota, North Dakota, South Dakota, and Wisconsin. The 2015 NACBI grantees are:

• Lower Sioux Indian Community, Morton, Minnesota, $30,000 – This project will help revitalize the Native American artists who have been teaching, preserving and showcasing art in the mediums of pottery, quilting/sewing, woodwork/sculpting, beading, leather work, painting/drawing, and quillwork. The Lower Sioux Agency Historic Site will be the hub station for artists to showcase their art, market their products and provide educational workshops to the Lower Sioux Tribal Community members and other Natives in the area.

• Red Lake Band of Chippewa Indians, Red Lake, Minnesota, $30,000 – The Red Lake Native Arts Program serves predominantly adult artists and emerging youth artists living on and or near the remote Red Lake Reservation in northwestern Minnesota. The grant will provide a wraparound approach from developing the artist’s personal/business foundation to providing access to expanded markets and the necessary tools for success.

•Little Eagle Arts Foundation (LEAF), Wisconsin Dells, Wisconsin, $15,000 – The Little Eagle Arts Foundation (LEAF) will utilize the grant to expand its capacity as a Native nonprofit. LEAF will plan and implement a board retreat for a planning, growth and expansion project, which will serve the LEAF Board of Directors and the Native artists (predominantly Ho-Chunk and other Great Lakes-area tribes) that benefit from LEAF’s programs.

• Turtle Mountain Tribal Arts Association, Belcourt, North Dakota, $30,000 – The Turtle Mountain Band of Chippewa Indians has experienced a loss of art forms that were essential to its heritage and culture. Creating an authentic Native American artwork project will assist in redeveloping the lost arts. The Turtle Mountain Tribal Arts Association has created an art project, the Artistic Renewal and Preservation Project, consisting of three component: beadwork, red willow basket creation, and dance regalia, focusing on the traditional styles of the ancestors.

SMSC and MAZON partner with U of Arkansas School of Law

A landmark project to enhance tribal food sovereignty was unveiled as the Shakopee Mdewakanton Sioux Community (SMSC) and MAZON: A Jewish Response to Hunger announced their collaboration with the University of Arkansas School of Law as part of the tribe’s Seeds of Native Health initiative.

Due to a long history of limited access to nutritious food, Native Americans suffer with obesity, diabetes, and other nutritional health problems at disproportionate rates compared to other ethnic groups. In an effort to create and sustain lasting policies and programs that will overcome these challenges, the Indigenous Food and Agriculture Initiative at the School of Law will lead the development of a long-needed, comprehensive set of model food and agriculture codes to be customized and adopted by tribal nations.

The project will be led by Janie Simms Hipp, director of the Indigenous Food and Agriculture Initiative and former U.S. Department of Agriculture senior adviser for tribal relations.

For more info about Seeds of Native Health, see: www.SeedsOfNativeHealth.org.