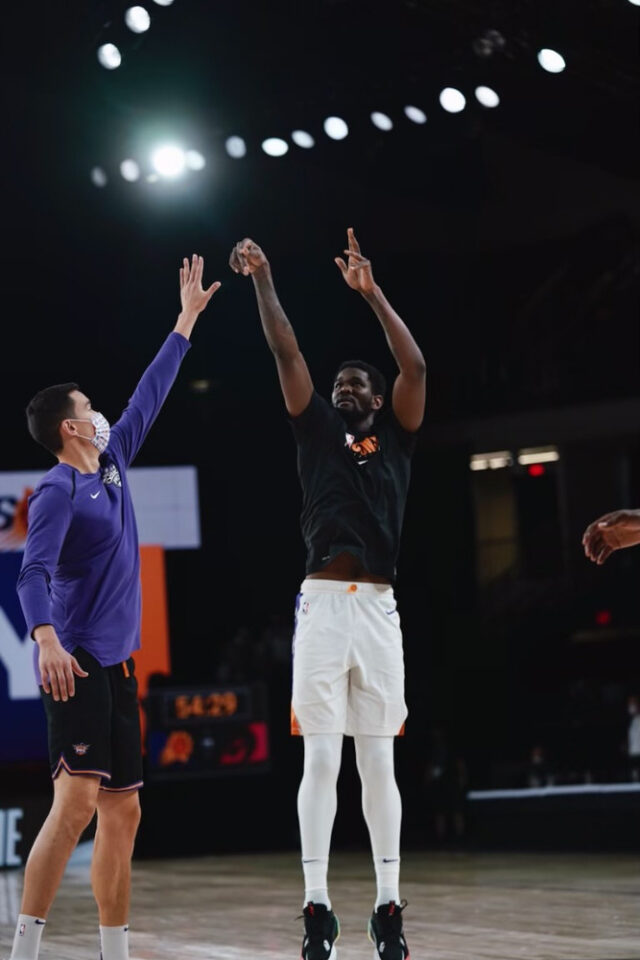 According to media reports, the last game of the 2021 NBA Finals series featuring the Milwaukee Bucks beating the Phoenix Suns 105-98 drew 12.5 million viewers.

Ben Strong, 34, is a Red Lake Nation member and his growing extended family of fans were among the viewers. However, Ben was notified that his contract wasn’t renewed so he is out of work for the time being.

Ben was hired by the Phoenix Suns as a player development coach during the COVID-19 season of 2019-20. He had a full season during the 2020-21 season.

He was the 2007 NCAA DIII National Player of the Year, and was a two-time All-American at Guilford College (NC). After college he played professional basketball in the NBA D-League and overseas.

“Ben hit a huge growth spurt between his sophomore and junior year in high school,” said Caleb Kimbrough, Ben’s friend since childhood and who they consider each other brothers. “When we worked together at Huntingdon College, he brought his knowledge from the several professional teams he had played for.”

“My brother Sam Strong, 37, also helped shape me into the basketball player I was growing up,” said Ben.

“I was given the opportunity to present two scouts this year to the team during the regular season,” said Ben. “This meant I did all of the work from start to finish in scouting an opponent. Getting up in front of NBA greats like Chris Paul and Devin Booker was very intimidating.”

“My fellow coaches believed in me and empowered me to take the scout and deliver a clear message to the team before the game,” added Ben.

“My Ojibwe core values have shaped me as a coach,” said Ben. “I appreciate all the collective work as a whole unit from top to bottom that it takes to build something special.”

Dad Ed Strong, Red Lake Nation member, shared his teaching moments with his son Ben as he was growing up into the game, “The most memorable thing I taught Ben is that when you get a rebound, never bring the ball down because the little guys will try to steal the ball and I was very proud he carried that information all through his playing days.”

Ed and his first wife Sarah Strong lived in Chapel Hill, NC. They divorced when Elizabeth was nine, Samuel was five, and Ben was an infant. The children were raised by Sarah and her new husband Steve Jeck.

Sarah talked about raising their children: “We had a solid foundation at home. Grew up in white middle class neighborhood in NC. Cultural connections to Red Lake happened in the summers. Stepdad Steve was present there when Ben was 18 months old. Dad Ed Strong was always engaged even when not present.”

Stepdad Steve said: “Ben’s influences are a complex mix of physical and cultural factors. Some common threads are determination, effort, appreciation for life and peace. The flow he went with was his very own.”

“Ben was always driven, even as a little kid,” said Elizabeth Strong, 41, the eldest child in the Strong family. “He is one of very few people I know that set a goal in childhood, something to excel in, and stuck to it, now for more than a couple decades. Basketball.”
“Ben kept pushing forward towards his goals to now share his skill and knowledge with upcoming players in the NBA league,” added Elizabeth.

Ed eventually remarried to Julie and they lived in the Chapel Hill, NC area. Sasha was born in 1992. Julie and Ed divorced a few years later.

“There’s nothing Ben can’t achieve, and there are no roadblocks in Ben’s life,” said Julie. “Just steppingstones on his way to his dream.”

“When Ben was first hired by the 76ers, I was ecstatic because he worked so hard throughout his career to get to the ultimate professional basketball platform: the NBA,” said Sasha Strong, 29.

“To be the first Indigenous man, and no less a Red Laker under the Strong family name, is such an accomplishment. He is a role model for our children and generations to come,” added Sasha.

IAAC comes to TC to increase indigenous representation in sports