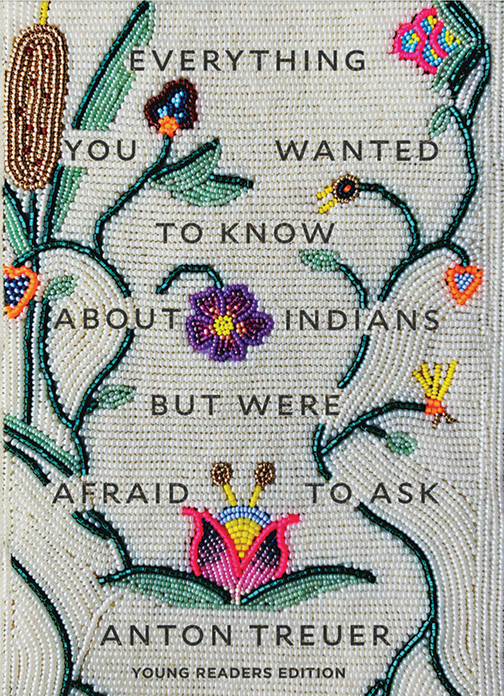 Some books you read straight through because it’s the only way. Some books read more like a restaurant menu where you pick some part here and there, absorb it, leave, and return for more.

“Everything You Wanted To Know About Indians But Were Afraid To Ask” by Anton Treuer is like a menu. Written in a question and answer format, the original 2012 book was expanded to include a social activism section. In this edition targeted for young readers, Treuer makes it clear that he doesn’t speak for all Indians, a burden often projected on single members of underrepresented groups.

He wrote the book as his response to misunderstandings about Indians who as a people, are often imagined and rarely understood. The answers to the dozens of questions are based on historical record and contributions from tribal members, especially elders. The book may be designed for youth, but its information is useful for readers of any age. If you or your curious 12-year-old daughter want a fuller understanding of the Columbus story, for example, or wonder why Indian men wear their hair long, or if you attended a powwow and couldn’t differentiate one dance from the other, this book is for both of you.

Complex chapters of American Indian history are covered, like the impact of the Dawe’s Act and the continuing impact of government and religious boarding schools. Treuer also answers questions of a lighter tone, like why the Johnny Depp cologne commercial made some Indians angry, but most of the Q&A is of a serious nature. One story especially stood out from the introduction:

Treuer wrote of his early hunger to learn about his Ojibwe heritage. While attending Princeton University, he learned of a sweat lodge ceremony to be held in a wooded area of New Jersey. He decided to check it out, and found more than 50 naked non- Indians waiting in the woods for something to happen. He wanted to laugh, run away, or scold them for playing Indian until a tearful older woman hugged him, apologizing for the way Indians had been treated. Treuer knew she was genuinely sorry, no matter what her state of dress. And he knew that because of her status as an elder, she deserved respect. He asked that she get dressed, which she did, and they would talk. He told her that men and women covered up in the presence of others.

He added: “We discussed ceremony, geographic custom, and practice. We talked about history. I explained my feeling that guilt for Whites and anger for Indians did nothing to make the world a better place, especially for the people stuck with such emotions, understandable though they are. The secret was to turn anger and guilt into positive action. She really listened and she learned a few things. In a weird way too, I got an education – from a naked stranger in the New Jersey woods.”

What Treuer learned was that he could tell his own story with authenticity and reliable information, and make an impact for the better. “I was an ambassador in a troubled place with the potential to make meaningful change,” he wrote.

He’s not afraid to invite trouble and wades into controversial waters. Treuer explains why “traditional Indian tacos” are neither Indian nor traditional; in fact, they are downright unhealthy. He explains why so many Indian children struggle with state-mandated tests, what Indians think about Sen. Elizabeth Warren’s Cherokee ancestry, and why Indians serve in military when historically, the U.S. Army killed so many of their own people.

Treuer tackles the subject of blood quantum as it related to tribal enrollment, pointing out that tribes have a right to decide who belongs and who does not. He also points out that enrollment records that determine blood quantum can be very flawed. In the list of questions, Treuer touched on one of my favorite topics: “What is meant by Native ‘ways of knowing?’” He referred to the way Indians can often sense, see and know things before anyone else, and not in some dumb, romanticized way of knowing. His reply to that question was excellent.

This is a thoughtful, useful book. If every middle school kid in the country knew its contents, the upcoming generation of Indians and non-Indians could live side-by-side with far more ease.

Treuer dotted his chapters with wisdom from many sources, including this:
“You have to love. You have to feel. It is the reason you are here on earth. You are here to risk your heart. You are here to be swallowed up. And when it happens that you are broken, or betrayed, or left, or hurt, or death brushes near, let yourself sit by an apple tree and listen to the apples falling all around you in heaps, wasting their sweetness. Tell yourself you tasted as many as you could.” (Louise Erdrich)

The young readers edition of “Everything You Wanted To Know About Indians But Were Afraid To Ask” (2021; LQ Levine Querido publishing; 368 pages) $18.99.