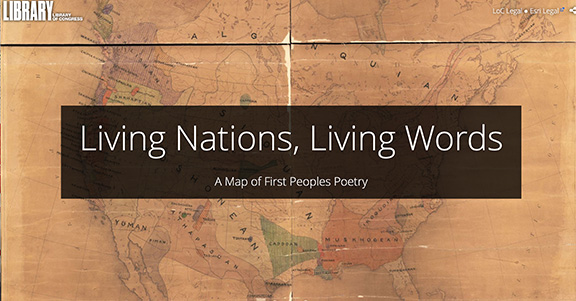 Erdrich (Turtle Mountain Ojibwe), is a poet, educator, and interdisciplinary artist. She earned a BA from Dartmouth College, two MA degrees from the Johns Hopkins Writing Seminars, and a PhD from the Union Institute. She is the author of seven poetry collections, her newest Little Big Bully was released this year by Penguin Books. Important for her work with the Poem-a-Day series, she is the editor of the ground-breaking anthology, New Poets of Native Nations, published by Graywolf Press in 2018, and co-editor of Sister Nations: Native American Women Writers on Community (Minnesota Historical Society Press, 2002).

Erdrich has received two Minnesota Book Awards, as well as fellowships and awards from the National Poetry Series, Native Arts and Cultures Foundation, First People’s Fund, and others. She teaches in the low-residency MFA Creative Writing Program of Augsburg University and was the 2019 Distinguished Visiting Professor in Liberal Arts at University of Minnesota–Morris. Erdrich is the 2020 Glasgow Visiting Writer at Washington and Lee University.

JL:  How were you notified you were chosen to curate Poem-a- Day?
HE: Shortly after the National Poetry series award, Poem-a-Day approached me to curate this November. They wanted me to contact 21 poets to ask for 1 or 2 poems that I’d select from. I determined to invite Native and BIPOC poets as well as LGBTQ and Two Spirit poets. It seemed so easy at the time to just reach out to poets I admire, so I said yes. Eventually it became an organizational effort, not gonna lie. I asked local poet Halee Kirkwood (Ojibwe) for help and got a poem from them as well!

JL: How did you choose poems for this series?
HE: Actually, I did not choose the poems presented on the weekend. Also, I chose several poems that did not make it into the series because once the pandemic hit and then the Unrest and BLM went global, I asked several poets for poems that would be relevant to 2020 and that would land well in this particularly anxious November. I consulted astrology, too. I kid you not. I’d given up on pollsters and decided that the stars would guide the month’s order. It worked out pretty well.

JL: The final poem you chose for November was the heart-breaking “No More Fire Here: A Sestina,” by William Bearhart, of Wisconsin’s St Croix band of Ojibwe, who died in August of 2020. It includes these wrenching lines: “We can only build the most modest of temples, when all we have is moonlight.” Tell us about finding that poem.
HE: Bryan will always be dear to me and it’s a heartbreak to lose such a talented writer so young. In the months before Bryan went back to the stars, we looked at a few of his poems and discussed how they would or would not work for Poem-a-Day. Many of his poems were frank about thoughts of suicide and that was one subject not allowed at Poem-a-Day. We settled on his deeply touching sestina about desire and damage. He was proud of the poem and pleased I would include him in this series. Poets.org added a profile of b.william bearhart work to their website so we have a memorial to his work now and that’s a comfort.

JL: In 2019, Joy Harjo was named US Poet Laureate, the first Native in that position. What has that recognition meant to other Native poets and writers?
HE: Joy is an amazing force for good in the poetry world and has no doubt helped Native writers to rise in recognition. Her work with the new Norton anthology of Native Poetry really enlarges literature in general. Her map project, Living Nations, Living Words, shows Native poets in their homelands. It was just published and it’s a terrific resource and reminder that all of the continent is Native land.

JL: Tell us about your own current projects. Are you able to work during the difficulty of the pandemic?
HE: Well, I am supposed to be working on something… what was it? My focus has been on my new book, Little Big Bully. I’m doing a lot of online readings and events. I guess I’ll get back to my book about Metis ancestors at some point!