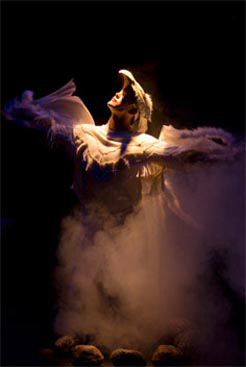 In the dance performance Raven is a creature of impulse and invention. In order to satisfy his overwhelming sense of curiosity, Raven hatches a scheme for stealing the stars, moon, and sun, and ends up bringing light to the people of the world.

The play is based on a traditional Tlingit story as recounted by Shaa Tlaa Maria Williams. The Tlingit straddle the borders of the Yukon and Alaska; the costumes and set for Raven are based on traditional designs of the Tlingit nation.

In addition to five performances, audiences will have an opportunity to attend a free meet-the-artists workshop with the performers from Raven Stole the Sun on March 24 at 4:00 pm. People can attend the 2:00 pm show prior and stay for the workshop, or they can plan on arriving early for the 7:00 pm performance to interact with the Red Sky artists.

Raven Stole the Sun is the first of three plays being presented by New Native Theatre this year. Upcoming shows will include two commissions: 2012 The Musical, based on the ten minute play produced last year in Bedlam Theatre’s 10X10 Festival; and a world premier play by the Native comedy troupe the 1491s, who may be best known for their viral Youtube videos including Slapping Medicine Man and The Wolf Pack Auditions.

Tickets are $7 and available at the door or online. For more info, see: www.brownpapertickets.com/event/211820. Or email: info@newnativetheatre.org