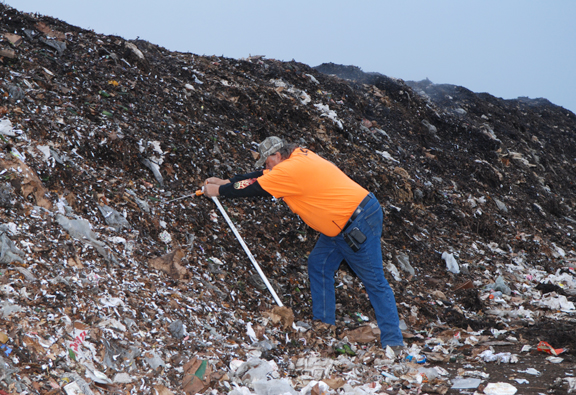 Each day at lunch, children in the Prior Lake Savage School district put their leftovers and their biodegradable paper products into a special bin. Empty milk cartons, napkins, and thick cardboard pressed trays are collected along with food waste and then transported to the nearby Shakopee Mdewakanton Sioux Community (SMSC) Organics Recycling Facility. There they are mixed with leaves, branches, used chopped up casino playing cards, water, and cucumbers and potatoes from nearby processing facilities.

Using best management practices and following both state and federal guidelines, the staff foster an environment where the heat and energy created within these materials breaks them down. Twelve weeks later these materials have been transformed into usable compost, decomposed organic matter rich in nutrients which can be used as a soil amendment.

The SMSC Organics Recycling Facility, located on trust land off County Road 83 and owned and operated by the Shakopee Mdewakanton Sioux Community, opened to the public in the fall of 2011.

Local haulers transport materials to the facility where they are added to a KompTech Crambo slow speed grinder and mixed together following a science-based recipe that carefully blends carbon, nitrogen, and moisture. The output is then placed on a windrow pad, a designated area which contains the rows, using a KompTech Windrow Turner which turns the rows every three days. The materials are screened using a KompTech L3 star screen and ready for use in about 12 weeks.

Organics Recycling Facility Supervisor Russ Leistiko, said. "The site is open to the public, such as residents and local waste haulers for a fee, currently ranging from free to $38 for Source Separated Organics, commonly known as SSO’s. Most wood waste is free right now."

Dr. Sue Ann Gruver, Superintendent of the Prior Lake-Savage Area School District 719, talked about the new organics recycling program. "All of our schools still recycle paper, plastic, and aluminum, as in past years, but we now have added organics to our recycling efforts. With this addition, we hope to divert at least 80 percent of our trash from landfills."

Though the site opened in the fall of 2011, landscaping will be completed in the spring of 2012 when the site is transformed into a landscaping demonstration area to include hundreds of additional seedlings, storm water ponds, and green space. A demonstration area will show the difference between crops grown with compost and without. Compost is available for retail sale at the site.

An eight-foot tensile woven wire fence surrounds the 25-acre site. Manure from the farm of a tribal member is composted and managed separately which allows for use on organic lands such as the Wozupi, the Community’s certified organic garden.

The SMSC is a big user of compost products, and last fall staff mixed 4,000 tons of a special sand and compost blend for an expanded dancing arena at the SMSC Pow Wow Grounds.One concern local residents had before the site opened was the potential for odor emitting from the site. Staff manage odors by blending feedstocks with wood chips and other bulky carbon sources to keep oxygen within the piles which reduces odor.

Composting is considered environmentally friendly largely because it takes a product that in the past was buried in landfills and converts it to a useable, organic product. It is an aerobic process meaning it utilizes oxygen to break down organic matter. This is in contrast to the anaerobic process in a landfill which buries waste in dirt, a process which produces methane, a primary gas contributing to global warming.

By composting organic materials less methane gas is produced. By composting locally, there are fewer emissions by trucks hauling the SSOs because they travel less distance and use less fuel; transportation costs for haulers are also reduced.

The wave of the future is for residents and businesses such as restaurants to separate out their organic materials (brush, leaves, and food waste) for their haulers to collect and bring to a compost site. San Francisco and the Seattle area already require such separation. Minnesota banned yard waste from landfills more than two decades ago, requiring haulers to manage it separately but nearly all food waste is still buried in landfills. Haulers collect and dispose of yard waste separately already so adding food waste and other organics could easily be added to the process.

A possible future development at the SMSC Organics Recycling Facility would be to add anaerobic digestion of organic waste, primarily food, into an enclosed controlled environment where the oxygen would be removed and methane collected for energy to run generators or run in vehicles.