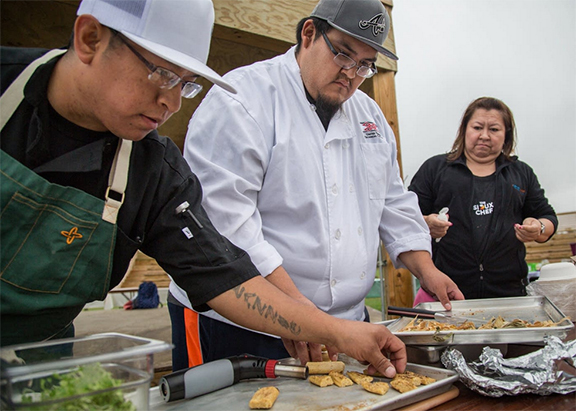 Hundreds of tribe members and others from around the region spent the weekend on the Red Lake Nation reservation in northern Minnesota learning how to grow and gather indigenous food.

The three-day event was the Red Lake Nation’s first Intertribal Food Summit which tribal leaders hope will spur the momentum of a movement among their people – a growing interest in returning to the food their ancestors grew, hunted and gathered.

As part of the event, Native chefs led cooking demonstrations, and there were classes on seed storage and grazing techniques. Foraging expert Kevin Finney took a group through the forest, looking for wild food.

The group of foragers headed for a piece of oak forest on the shores of Red Lake. On a cool day near the end of the growing season, Finney said he was not sure what they’d get.

But the first crop they encountered wasn’t so hospitable. To reach the woods, the group had to hike across a vast field of poison ivy.

A few people turned back, but the majority, a few dozen students, pressed on. Finney was not concerned. He has a big beard and wore tall leather boots and a hat made out of bark. He said he’s immune to poison ivy.

“I’ll just go to the store, get some calamine lotion and Benadryl. I’ll be fine,” he said.

Five minutes later he broke off a stick from a tree and used it to scratch at the developing rash on his ankles.

The food summit also included a big meal catered by the Minneapolis-based chef Sean Sherman. Sherman is Oglala Lakota and is known as the Sioux Chef for his efforts to rebuild indigenous cuisines.

Brian Yazzie, who works for Sherman, calls himself the Sioux Chef’s sous chef. 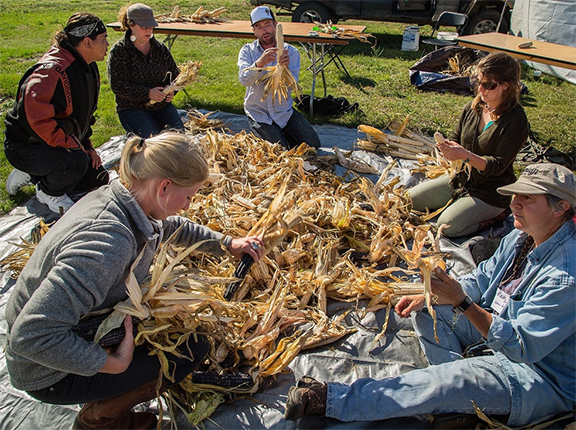 “We have sumac right now. Staghorn sumac is in season right now. Wild rice. Walleye of course. That’s what I’ll be making for dinner,” he said. “That’s indigenous cuisine, everything we have right from our backyards.”

Sherman sent him to Red Lake a few days ahead of the summit to gather ingredients. The walleye and wild rice are from Red Lake. Yazzie planned to forage the seasonings, but his initial attempt did not yield much.

Foraging is hard work, Finney said. It would take a small group of people four hours a day, all year round to gather enough wild food to live.

“I would encourage you to look at it from a totally different perspective. How much of your time is it worth to go see your grandmother? Think about it in that sense. This is a relationship you have with the land.”

“Over the lifetime of humans we’ve been used to a more local organic type of food, and when we deviate off that path, you see a lot of the health problems that our people are encountering today – the diabetes, the higher rates of cancer,” he said.

Strong’s father and grandmother both struggled with diabetes. Strong battled cancer. He blames the illness on unhealthy processed food handed out by the government, and more recently, sold at the local grocery store.

Strong said it doesn’t have to be that way. Every year, the Red Lake tribal fishery pulls a million pounds of walleye from the lake. Tribal leaders recently started a large community garden and a seed library. They’re raising funds for a deep winter greenhouse to grow vegetables all year long.

Strong hopes to bring bison to the area and breed great herds of them.

“That’s the way you become food independent, and that’s true sovereignty. Food sovereignty, if you will,” he said.

Most food eaten on the reservation still comes from the Bemidji Walmart, but one day, Strong hopes Red Lake will feed its own people, without having to forage through fields of poison ivy.

Nearly wiped out by pollution, wild rice is coming back to northern MN