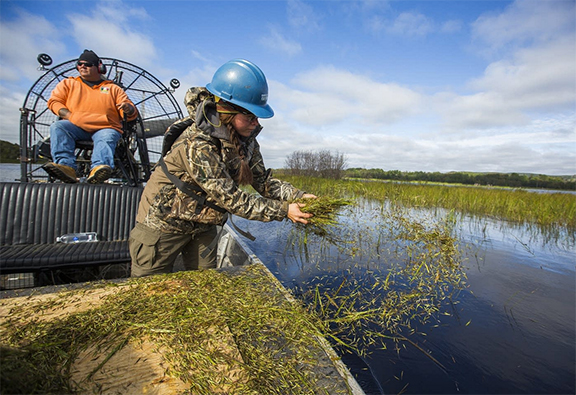 For the Fond du Lac Band of Lake Superior Chippewa, the St. Louis River estuary has been described as being as close to heaven as they get. It’s where the river slows and widens before emptying into the Lake Superior in Duluth.

“This was sort of a perfect place, a Mecca of sorts is what my uncle called it,” said Thomas Howes, the band’s natural resources director.

“Everything that one needed for a good life was provided by the environment here.”

That included wild rice, or manoomin in Ojibwe, a food that still plays a critical role in the cultural life of the tribe’s people.

Decades of human activity almost eliminated wild rice from the region. But now, several agencies are partnering on a landmark effort to restore wild rice to about 250 acres of the St. Louis River estuary over the next five to 10 years.

“From the time a baby is born, to when we send people off to make their journey into the afterlife, there are ceremonies, and manoomin is a central component of those,” Howes said. “A lot of people say, that if we don’t have that, then we cease to exist somewhat culturally as a people.”

Historically, the St. Louis River estuary may have sustained 2,000 to 3,000 acres of rice, one of the richest concentrations of rice in the region.

But over the past 125 years, industrial development, pollution and logging nearly wiped wild rice out, leaving behind only a few isolated pockets.

In the late 1800s logs were transported downriver so thickly lumberjacks could walk across them. Things got better for wild rice over time, though.

In 1978, a wastewater treatment plant went on-line, greatly improving water quality in the river. Over the years, contaminated sediment has slowly been removed from the river bottom.

“We’ve had such great improvements in water quality over the last couple of decades, that the time is right now to begin wild rice restoration because the water quality is high enough that we can bring the wild rice back,” said Daryl Peterson with the Minnesota Land Trust.

Peterson’s group, together with the Fond du Lac Band, Minnesota and Wisconsin DNR and other tribal agencies, is working on the current wild rice crop restoration project.

In September, Charlie Nahgahnub, a technician with the Fond du Lac Band’s Natural Resources department, fired up an air boat powered by a giant airplane prop. It was loaded down with 500 pounds of wild rice seed harvested from the White Earth and Leech Lake reservations.

Nahgahnub piloted the boat into a shallow backwater called Duck Hunter Bay. As he steered back and forth, two volunteers scattered seed on to the water’s surface.

“It’s tedious, but it’s fun,” said Danielle Yaste, with the Minnesota Conservation Corps, throwing the seed as if skipping stones. “So with your wrist, flick it so it goes out as far as you can, but also spreads out evenly. So it’s not in clumps, and it’s not too heavy.”

That way it distributes evenly, she said, and settles to the bottom, where next year it will hopefully take root in the sediment.

The Fond du Lac Band plans to seed around 12,000 pounds of wild rice into the river this fall. That’s on top of 8,000 pounds it planted last year.

The band has been restoring wild rice waters on the reservation for 20 years.

First, they cut and harvest invasive weeds that have taken over – kind of like mowing the lawn before reseeding. Then they spread the seed in the voids they create, handful by handful. They’re already seeing results.

Darren Vogt, Environmental Director for the 1854 Treaty Authority, another partner in the effort, just finished monitoring last year’s plantings. Wild rice grew this summer in all five bays they had planted last year, he said.

“There was at least some success everywhere. So that was an encouraging sign,” he said. “These kind of restoration projects are usually a multi-year effort, we don’t expect to seed once and be done with it, the goal is a self-sustaining population of rice. So it may take several years of seeding before things take well.”

While out on the St. Louis River, Nahgahnub pointed out where geese ate the rice just as it grew above the water’s surface. That’s a big concern for the rice moving forward, along with carp, which also like to feast on young wild rice plants.

“There’s a whole generation that doesn’t know how to do this,” he said. “It gives me hope, they want to revive it, restore it, to what it was.”