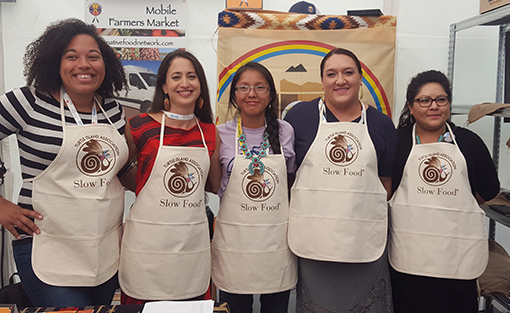 In an impressive fossil fuels travel day, I left the Standing Rock reservation and flew to Italy for the International Slow Food gathering known as Terra Madre. A world congress of harvesters, farmers, chefs and political leaders, this is basically the World Food Olympics. This is my fifth trip to Italy for Slow Food. I first went with Margaret Smith, when the White Earth Land Recovery Project won the Slow Food Award for Biodiversity in 2003 for our work to protect wild rice from genetic engineering.

This year, I went as a part of the Turtle Island Slow Food Association – the first Indigenous Slow Food members in the world, a delegation of over 30 representing Indigenous people from North American and the Pacific. We have some remarkable leaders, they are young and committed.

It is a moment in history for food, as we watch the largest corporate merger in history – Bayer Chemical’s purchase of Monsanto for $66 billion, with “crop protection chemicals” that kill weeds, bugs and fungus, seeds, and (likely to be banned in Europe) glyphosate, aka Roundup. Sometimes I just have to ask: “Just how big do you all need to be, to be happy?”

In contrast, the Slow Food Movement grows in depth and numbers. This year, 7000 people gathered from 140 countries to discuss clean, fair and good food, and how we will make that happen. Carlo Petrini, Slow Food’s president, reminded us that this is food which is not produced by forcing others from their land, poisoning ecosystems or underpaying farmers. This is the conference of cool cheeses and meats, amazing produce, and lots of chocolate. Those who come, Carlo notes, come to reload themselves with “energy and self esteem.” We are, frankly, quite undervalued.

Why is this important?  Because on a worldwide scale two billion people suffer from hunger and a billion are obese.    You can guess which side of the equation most Americans are on. Food security is the security of society. That security will not be found in larger corporate mergers.

Consider this:  Indigenous farmers are already producing up to 70% of the food in communities, while industrialized agriculture, with $l3 trillion in investments, cannot actually feed the world.

If there are founding mothers and fathers of the Turtle Island Slow Food Association (our formal membership name in the l40 countries), some of them were present this year. Clayton and Margaret Brascoupe of the Traditional Native American Farmers Association (Santa Clara) have been staunch in their preservation of traditional seeds, and their nurturing of young farmers. Lorraine Gray (Mohawk/Tesuque Pueblo) remains committed to permaculture, longstanding leaders in the food systems. Patti Martinson and Teri Badhand (Taos Community Economic Development Commission), Dan Cornelius (Intertribal Agriculture Council) successfully worked to secure the purchase of both buffalo and wild rice from tribal producers for the commodities program. And Melissa Nelson, of the Cultural Conservancy, remains as a backbone of the Indigenous Slow Food Movement.

But this Terra Madre really featured the leadership of a new generation of traditional farmers and food leaders. Denisa Livingston (Dine) has worked tirelessly to implement the Navajo Nation Junk Food Tax. Kaylena Bray has worked to restore California traditional foods; Victor Martinez to restore Ohlone food, language and culture.  Others include: Aretta Begay (Dine), Elizabeth Hoover (Mohawk, with a forthcoming book called Garden Warriors), Prairie Rose Seminole (Arikara) and of course, Sean Sherman (the Sioux Chef). As a Founding Mother (if that is what I am called) I could not have been more proud of these young people.

Indeed the work is reaffirmed and so important. As Canadian researcher Pat Mooney explains, “Indigenous people work with 7000 crops and one million varieties, while the majority of industrial agriculture has whittled this down to l35 major crops and l03,000 varieties.”  Agribusinesses are clearly losers.

The very foods we grow or harvest have very special powers to combine. As Harriet Kuhnlein, from McGill University explains, “…corn, beans and squash;  some are nitrogen hungry and some are nitrogen producing…” Make a meal and all is balanced. “Singularly tortillas are at 62 on the glycemic index, and beans are at 22”, Kuhnlein explains.  Put together into a meal, they are at 32.

Plants are medicine. There are over 300 natural medicines in plants to reduce blood sugar. And the lessons of l0,000 years of agriculture and the Irish potato famine tell us that diversity is the answer; the way to adapt plants for climate and for survival.

We live in a time, when 41 percent of Minnesota’s streams and lakes have excessive nitrogen, all of them in the state’s agricultural regions. Nitrogen is a primary cause of the vast oxygen-depleted area in the Gulf of Mexico known as the dead zone. That dead zone is about a thousand square miles of destroyed ocean. We live in a time when the climate will change, and industrialized agriculture is sucking up billions of dollars to create “climate smart varieties”, (about $l36 million per smart seed creation), when in fact those plants will not be as intelligent as the plants of our ancestors with all their adaptation and diversity.

To be sure, life makes strange bedfellows. Max Brooks, of the Modern War Institute at West Point, appears more concerned, than even I am, about the Bayer/Monsanto merger. Noting the 2013 US Supreme Court decision in Bowman v. Monsanto, which accorded intergenerational seed ownership to the corporation, Brooks is concerned about the half of US farm land already in GMO production and the foreign ownership of all of this food security.  “Crops… are the difference between life and death. …American farmers will now be buying those seeds from a foreign power, albeit a friendly one. And I mean a lot of seeds – Monsanto (through its various licensing agreements) controls 80 percent of the corn market and 90 percent of soybeans…”  Brooks is worried about the day when Bayer is purchased by a Chinese multinational and used as leverage in a political battle.  Basically, the company which brought gas to the Nazi gas chambers now has control over most American crops.

In the end, what I want and I think we all want, is good food. I will venture to say that I also want a free healthy school lunch guaranteed to every child in America, and that will cost $ 5 a day per child to pay farmers a decent price.  That’s what I want. And I want to grow traditional corn without threat of genetic contamination or theft. And I would like to have water.

Petrini reminded us of who we are, “This is a movement which must be based on emotional intelligence. Bayer has bought Monsanto, but we are the multitudes and we are more powerful.”

And for all of you who are snickering at my international fossil fuels travel; I have a final word:  Jet Blue announced that it will be buying more than 330 million gallons of renewable fuel over 10 years to get ahead of the curve on greenhouse gases. Delta, you should follow suit.

Winona LaDuke is founder and Executive Director of Honor The Earth .