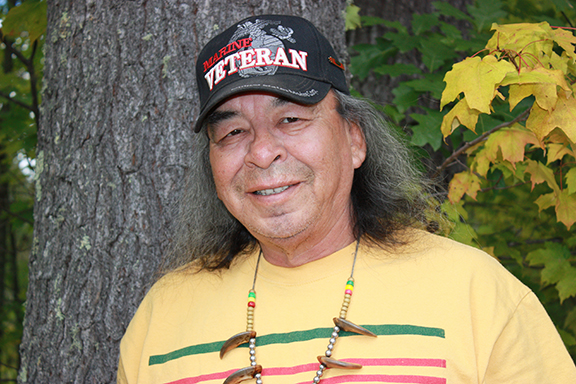 Internationally recognized and award winning author, poet and storyteller Jim Northrup died of cancer at his home at Sawyer, on the Fond du Lac Reservation, on Aug. 1. While family and friends among the Fond du Lac Band of Lake Superior Chippewa held memorials during the past month, honors from broader communities are forthcoming that will add to his legacy.

On September 11, Northrup will be among 12 Minnesota military personnel and veterans to be honored with Legacy Awards from the Minnesota Humanities Center as part of its Veterans’ Voices Award program. That program, to be held at the University of St. Thomas Anderson Student Center in St. Paul, will also honor 13 “On the Rise Veterans” who are 40 or younger and engaged with service to our country and communities.

“I was privileged to be able to tell him that he was receiving this award two days before he died,” said Trista Matascastillo, the center’s program officer for its Veterans’ Voices programs. “He was pleased.”

He was indeed, said Pat Northrup, his wife of 38 years, who will be at the September honors program with family members and friends. While for many in the Upper Midwest region, Northrup is best known for providing a voice and a window on reservation life and Native American – Ojibwe culture, but an entire generation of Americans also knew Northrup as a voice for warriors in the Vietnam War, she said.

Tom Whitebird, the FDL veterans’ service officer, was in meetings in late August planning for veterans observances. Details were not complete when this issue of The Circle went to press. But Whitebird said plans were being made to commemorate Northrups’ work built around Fond du Lac Memorial Day activities next year.

James (Jim) Warren Northrup Jr. was born April 28, 1943 on the Fond du Lac Band of Lake Superior Chippewa reservation in Minnesota. His father, also named James, was a truck driver and logger. His mother was the former Alice Shabiash.

Jim, who’s Anishinaabe name was Chibenesi, endeared himself to Native American and military reading audiences with his books: Walking the Rez Road, Rez Road Follies, Anishinaabe Syndicated: A View from the Rez, and Rez Salute: the Real Healer Dealer that combine his observations on broader society, the world, and personal matters from his FDL and Marine Corps life experiences at home and in Vietnam.

These writings touched people who shared experiences, said Pat Northrup and family friend Ivy Vainio, the multicultural students’ services coordinator at the University of Wisconsin-Superior. They were with Jim Northrup awhile back when he spoke to Wisconsin military veterans at a stadium filled celebration in Green Bay, Wis.

At the same time, Northrup is still best remembered by readers in Indian Country. He started writing a newspaper column, Fond du Lac Follies, for The Circle nearly three decades ago and had since syndicated it to other Native American newspapers across the country.

Among area Ojibwe, he is also fondly remembered for starting a language summer camp program with his wife to keep the native language alive for future generations. For that and other efforts to preserve Anishinaabe culture, traditions and language for all Minnesotans, he was presented an honorary Doctorate of Letters by the Fond du Lac Tribal and Community College.

He is survived by his wife and a large extended family of children, grandchildren and great-grandchildren.

For info on the Veterans Voices awards program, and for information on other award recipients, see the Minnesota Humanities Center’s announcement at: www.minnesotahumanities.org/vets .