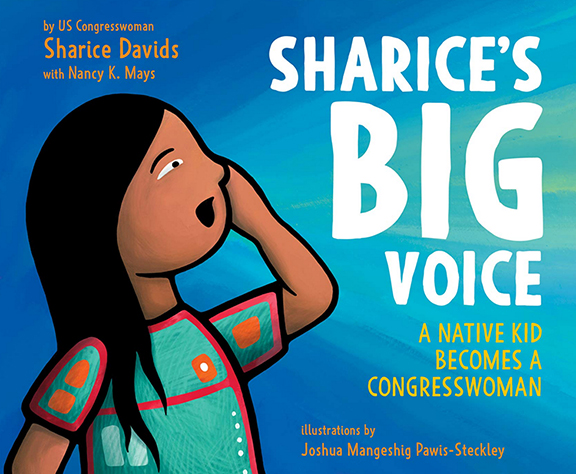 While still a little girl, Sharice Davids (Ho Chunk) raced through the house doing high kicks and air punches, just like Bruce Lee, her hero. She even wore a black belt. Later in college, she trained to be a pro-mixed martial arts fighter.

As an adult, Sharice took her competitive spirit to a place where not many American Indians ever find a place: the United States Congress. The chatty and bright daughter of a single mother showed all the doubters a thing or two by setting goals and not letting defeat discourage her. In 2019, she was sworn in as U.S. Representative from Kansas’s 3rd congressional district.

“Sharice’s Big Voice: A Native Kid Becomes a Congresswoman” (Harper Publishing) is a charming and inspiring picture book with a story to entertain readers of all ages and genders. It’s pretty rare when an individual is presented so artfully in a children’s book that they impress the heck out of an adult reader. But that’s what happened. I forgot I was reading a book aimed at a second grader and sat up a little straighter, intrigued by the adventures and life choices of this admirable woman.

That’s the thing about really good children’s books: they contain the same elements of a well-written book for adults. Truth. Engaging characters. A story arc. A few life lessons. Well-written words. Add this to the mix: joy. You can’t help but feel at least uplifted after reading about Sharice Davids’ unflinching desire to help people improve their lives. She is the essence of a public servant, and Kansas is lucky to have her in Congress. So are we.

The story opens with a brief description of election night followed by Davids’ childhood years. She is a naturally outgoing little girl with a gift for gab that gets her into trouble because she talks all the time. She talks so much that a teacher made her go into the hall to finish her work because it was the only place where she couldn’t talk. So the little girl talked with everyone who walked by. “I discovered that the best way to learn about people is to listen to them,” she wrote. Her mother was a 20-year U.S. Army member who rose to the rank of Sergeant First Class. The two moved often, to Germany, Kansas and Missouri.

The outgoing little girl made friends wherever she went.

The story shows the way hard work pays off as Davids works multiple jobs to pay college tuition, learns martial arts, participates in martial arts fights, and ultimately ends up at Cornell University Law School. After a stint in a big law firm, she directed community and economic development at South Dakota’s Pine Ridge Reservation. That led to a job with the Obama administration which led to a decision to run for Congress. The naysayers lined up to shake their heads and doubt. Didn’t matter. On election night Davids won by a wide margin, walked into a ballroom and joined her mom on a stage where they lifted their arms.

The book includes a profile of the Ho-Chunk Nation of Wisconsin, and a description of the Ho-Chunk warrior tradition. It is nicely illustrated by Joshua Mangeshig Pawis-Steckley.
Overall, it leaves you with hope that a small slip of a woman can pack a powerful punch if necessary, and walk ahead into a room where few American Indians have entered. It makes you think that more women can do this, and it makes you know that more woman should do this.

“Sharice’s Big Voice: A Native Kid Becomes a Congresswoman” was written by Sharice Davids with Nancy K. Mays. It was illustrated by Joshua Mangeshig Pawis-Steckley, and will be available in June, 2021. It is published by HarpersChildren, and lists for $17.99.