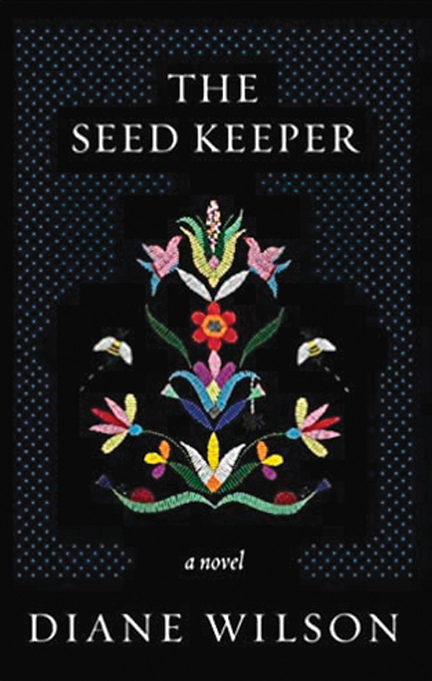 “The Seed Keeper” by Diane Wilson (Mdewakanton Dakota) shows the way seeds are the foundation of every living thing and hold the world together. Cherish them, protect them, nurture them and they will nurture you and the generations to come. In her first work of fiction, Wilson tells the story of four women intricately connected by seeds handed down from generation to generation. For hundreds if not thousands of years, women selected and saved the best seeds for food production, passing them down as sacred gifts. In her afterward, Wilson writes that Dakota women sewed seeds into the hems of their garments to be planted after the U.S.-Dakota War of 1862. That gesture suggested a resolve to survive whatever happened next, as well as the keen importance of seeds to feed families.

In this lyrical, well-told story, the Dakota history of removal is sprinkled throughout, illustrating the sad impact of war and removal of Dakota from Minnesota, and the forced separation of children from their families through boarding schools and later through foster care. The story also illustrates the pollution of the Minnesota River over time, the impact of big agriculture and chemicals on soil, and the way both soft and hard bigotry take a toll.

After that last paragraph, I know what you’re thinking. A downer about Indians. Not really. One of the story’s characters who came through hardship, Rosalie Iron Wing, serves as protagonist. The book opens with a description of Rosalie as an adult in a remote cabin where she spent her childhood. Rosalie fled to the cabin from her life on a farm two hours away in order to better understand her past.

The chapters reveal Rosie’s childhood with the father who loves her, and her years in foster care and then adulthood. She meets and marries a non-Indian farmer. They build a good life and raise a son. For me, Rosie’s story was the most compelling of the four women who are featured in this book over three generations. I read through Rosie’s life and lost track of time, turning pages quickly and hoping she would find the life she sought. For years Rosie’s only goal was to leave the foster home and get a job in the Twin Cities, without giving much thought to the transition to a large urban area.

What becomes clear to a reader is Rosie’s decades-long affinity for gardening, and her search for community. From a young age, she tenderly coaxed food from the soil, later calling delicate young plant shoots her babies. Not surprisingly, seeds, plants, water, trees, skies, and seasons receive frequent mention in this book. Rosie’s father, Ray Iron Wing, taught science in the local high school and told his daughter from a young age that trees and plants were teachers from whom they could learn. He taught his daughter survival skills as though he knew she would need them, as though to prepare her for his departure. Wilson wrote: “Sometimes he would tell me a fantastic story of thunder beings and stolen horses, of raids on enemy camps, of demons who woke him and rode his veins, searching for his heart.”

Years earlier Rosie’s mother, Agnes Kills Deer, stole Ray’s heart. Wilson paints vivid, memorable descriptions including this one about Agnes: “She had this way about her, like she could either fall to pieces or rip you apart, and she hadn’t decided yet which way to go. The men all wanted to get close to her and the women watched her like she was about to steal their powwow money.”

Wilson is good at flashes of humor and insight. Late in the book she talks about what it means to be Dakota. Being an Indian is hard, she writes, but not just because Indian history is hard. Being Dakota demands your very best every single day, and it means each step taken is a prayer. Earlier Darlene, a Dakota elder, confronts Rosie and her son, Thomas, who were at odds. Darlene said: “We’re a mess, a broken-down mess. And we’re all that’s left. Don’t go wasting time feeling sorry for yourself. Plenty of people had a rough life. You just make the best of it – that’s all anyone can do. The two of you still have time to do better. It’s up to you.”

Wisdom, humor, truth, marriage, history, child-rearing, environmental advocacy, overcoming obstacles, tears: the book has it all, told in a compelling and poignant way.
Wilson is enrolled at the Rosebud Reservation and is the author of Memoir, Spirit Car: Journey to a Dakota Past and Beloved Child: A Dakota Way of Life. She is executive director for the Native American Food Sovereignty Alliance. The Seed Keeper (Milkweed Editions, $16) will be available for purchase in March, 2021.