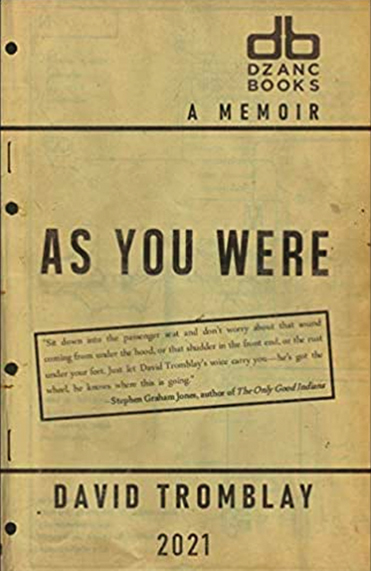 In his memoir “As You Were,” Duluth native David Tromblay wrote with an outcome in mind. It is: when you the reader see something, say something. Act. Never merely witness brutality without intervention. When brutality is used on a child, you have a special obligation to intercede.

This raw, remarkable book follows Tromblay through a childhood of trauma while living on the Fond du Lac Ojibwe Reservation near Cloquet, and in the Morgan Park neighborhood of Duluth. Written in the second person, the reader sees life through the eyes of David as a child, adolescent, new military recruit and present day. While still a small boy, his impoverished mother dropped him off as a Christmas gift to his Morgan Park grandparents, where nearly every day brought beatings, humiliation, isolation, intimidation and pain.

If you the reader experienced cruelty and beatings as a child, the story may trigger post-traumatic stress syndrome, so consider that. Turns out Grandma Audrey spent her youth at a boarding school for American Indians, where corporal punishment was meted out frequently. She took that experience to the Nth degree with her grandson, flying into uncontrollable rages when he ate from the wrong box of cereal or didn’t put clothes hangers away quickly enough, or said the wrong thing which led to pouring Liquid Palmolive down his throat.

When David’s hair starts to bleach out in the summer to the color of his Irish American mother’s hair, Grandma shaves his head with dull clippers on the front porch, leaving a bloodied scalp and clumps of hair blowing around the yard. Tromblay wrote that neighbors watched this display from their front porches and living room windows and merely closed the curtains or retreated further inside, after calling their own children into the house.

With each chapter of horror, I waited for a hero. Which neighbor would report the in-plain-sight child abuse? Which family member who heard the screaming and saw the beatings would call child services? None. Tromblay hopes that his book will convince today’s generation to act, not just close the curtains.

Oddly, the least violent chapters in the book start in 1996 when David goes to boot camp and then to war. After a lifetime of brutal treatment in Duluth, the drill sergeants offer protection. They don’t scare David. “There are rules of what they can and cannot do. If they break those rules, they’ll lose their hat and maybe even their careers. You know you’re safe with them.”

One of the books most poignant scenes shows a drill sergeant reminding David that he’s not at his messed up childhood home anymore, he’s a survivor, and if he learns what his officers have to teach, he’ll survive the battlefield.

Kind words also came at age 12 from an unexpected source, a heavily tattooed member of the Thunderbirds Motorcycle Club in Morgan Park named Bones. When Bones learned that David’s dad took off, leaving him hungry, he hollers at his wife to fix David something to eat. David hangs around with Bones, drawn to the rough-around-the-edges biker who teaches bike mechanics to David. Once some guy asked Bones if David was his son. “I wish!” Bones replied. Up to this very day, David cherishes that reply.

The man who could call David his son claimed that he wasn’t a complete failure as a father, because he served well as an example of what not to be and how not to act. “This is how alcoholics operate,” Tromblay wrote. “Able to justify anything,” adding that his father wasn’t a bad Indian, he was a bad man who happened to have some Indian blood.

Dotted through the violence and chaos in this book is genuine humor. (You didn’t see that coming, did you?) But it’s true. The clueless retelling of a Hmong wedding is hilarious. A prison break in Sulaymaniyah, Iraq, leads to an amusing mad dash in underpants. I hope truth teller Tromblay writes more about his years of military service with the same unflinching style in “As You Were.”

The May 2021 interview is located at https://www.youtube.com/watch?v=RXeHfbS4PM8&t=9s.