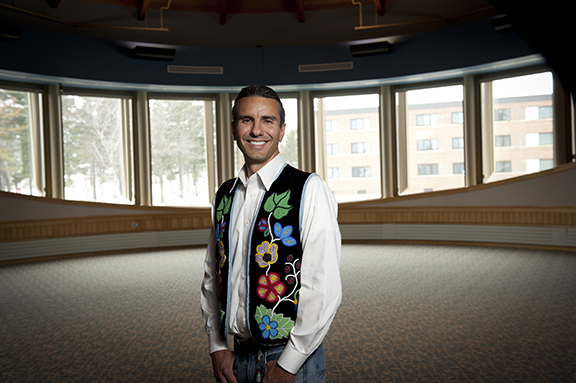 I dial the number sent to my phone. It rings maybe two times. “Hello,” says a rather cheerful voice, “This is Anton Treuer.” I stumble through a brief introduction and ask him if it would be alright that we conduct this interview over Zoom, to which he agrees. Treuer’s face blinks onto my screen and we begin our conversation. “So Anton, tell me a little about yourself.”

“Sure. I’m Anton Treuer, professor of Ojibwe at Bemidji State University. I come from Leech Lake. My Ojibwe name is Waagosh, which means Fox. I’m from the Eagle clan.” Treuer is also the author of nineteen books, the recipient of over forty awards and fellowships, and is considered by many to be a renowned Ojibwe spiritual leader and language warrior.

Treuer’s latest book, ​The Language Warrior’s Manifesto (Minnesota Historical Society Press, January 2020)​ is about the importance of language revitalization. He’s been fighting the battle of language revitalization and helping keep lit the flame of Ojibwe spirituality for many year. Treuer has much incite to offer about the importance of these aspects of Indigenous life, “There are a lot of things that impact us as human beings and impact our identity. Every language embodies a unique worldview and ultimately, I would say we’re impacted by our language and our cultural practices. We have everything from sacred societies, drumming, medicine dance, to every day culture ­– the way we live our lives. Those are the things that keep us grounded in our indigeneity.

It was not until 1978 with the passing of the American Indian Religious Freedom Act that the Indigenous peoples of the U.S. were legally allowed to practice their cultures and sacred ceremonies. In the relatively short amount of time since then, resources for language and culture resurgence have sprung up.

“It’s changed a lot. When I started this work, you could probably count the number of [Ojibwe] books on one or two hands, and now there are so many hundreds that I couldn’t tell you how many there are. We’ve broken through to mainstream presses for both bilingual and monolingual publications now, so there’s a lot more work going on with resources. We’ve also seen immersion schools popping up in different areas.”

In addition to resources, Treuer states that there’s also been an increase in a willingness to use them. “There’s been a resurgence of interest amongst millenials and Gen Z about language and culture and I see heightened levels of engagement and interest in people, which is really great.”

However, the battle of language revitalization is not without its losses. Treuer cites some key challenges that the revitalization effort has faced over the years. “When I was starting this stuff, you’d walk around the grocery store and run into fluent language speakers everywhere, [but since then] we’ve lost a lot of really great speakers. Even communities that we thought of as very strong, Inger, Ponemah, Mille Lacs, just have a handful of speakers left in some places, and most of those are seventy years old or older – they’re not having babies and raising kids.

“There’s been a shift in who’s carrying the load for intergenerational transmission of Ojibwe to young people who, for the most part, are second language learners or their kids are already grown up. There’s been a baton pass-off that’s still in process, but has unmistakably changed the battle.”

Despite the years, work, and resources that Truer has put into language revitalization, he’s not done yet. He has high hopes for the movement in the years to come. “I’d like to see a proliferation of immersion schools, resources, higher level of proficiency fluency and eloquence of the language. I’d like to see more people graduate into the ranks of spiritual leadership and Indigenous ceremonial knowledge. I want us to have 5000 books loaded into an accelerated reader program with assessments, so we can really do literacy for this language.

“Which is, of course, change, because we’re an oral language. But I think that kind of change is needed. We’re not going to wall ourselves off from the world and live in wigwams, you know? We need our language suited for the modern world.”

One way in which this is occurring is through the creation of Ojibwe language curriculum on Rosetta Stone, a language learning software that offers twenty five languages from across the world.

“We’re in the midst of developing Rosetta Stone for Ojibwe, which I think will be really great because that’s going to push an app on everyone’s phone that you can take anywhere you go. There’ll be six years of sequenced language classes, with four units per year with expansion units in different areas of the language. I think it has the opportunity to be really helpful.

I ask when this service will be released. Treuer said, “Yeah, COVID threw a monkey wrench into that. [It’s difficult] just getting people together for the filming, especially since tribes actually have stricter prohibitions than state governments [in regard to COVID], so we had to bump some of that schedule. But I think a year from now, we’ll see year one, and then we’ll see a unit after that every year for the next several years.”

The delay of Ojibwe being on Rosetta Stone isn’t the only thing that’s been affected by the pandemic. Treuer said, “The challenges are that a lot of our big ceremonies, like ceremonial drum and medicine dance, sometimes gather hundreds of people who are standing right next to each other, breathing in each other’s faces, and that’s just not medically wise. So we’ve pretty much had to cancel medicine dance across the board, with just a couple of exceptions for extreme emergencies.

“Even our funerals have been deeply impacted. We do lots of feasting at traditional funerals, sharing of music and legends, so it’s often a very large gathering. We’ve even had a lot of Native people die from COVID, which means sealed casket, outdoor ceremony, no feast – pretty dramatic impacts on basic protocols.”

There’s no doubt that the pandemic has radically affected Native peoples across Turtle Island, as well as individuals around the world. To this, Treuer offers some reassuring words, “I’ve been telling people in our circle that ceremonies aren’t the place you go. You are the ceremony. It lives inside you.” He goes on to say, “I’ve got some people who are just freaking out about Trump-pocolypse, plague, whatever, and I’m just like, ‘breathe in and out, you guys. We’ve been surrounded by people that hate our guts for five hundred years. And every generation is saying the last of the ‘blank’, last of the mohicans, last of the Ojibwe, the last speaker.’ I say screw ‘em all. We’re still here.’”

Treuer stated that each generation is different than the last, with new issues needing to be addressed with new tools. “Do you want the culture that was well suited for 1600 right now? We might all starve to death. Do you want the one from 1850, when we were all really good with war clubs? We have different challenges, so we probably want the culture that we have now. That doesn’t mean we want all the problems we have now, we want to address them, but the culture has to adapt to our unique circumstances and challenges. We can still do that and maintain our indigeneity and our Ojibwe-ness. So we evolve and adapt the tools we have. I think our languages and cultural practices are tools we need in the toolbox.”