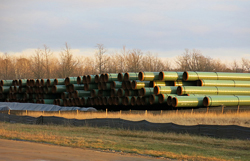 This week, the Mille Lacs and White

the Sandpiper line, a $2.6 billion pipeline that would pump North

Dakota crude 300 miles across Minnesota to its terminal in Superior,

Wis., and eventually to refineries around the Great Lakes.

The tribal hearings are happening as

the Minnesota Public Utilities Commission readies a major ruling on

While the route preferred by Canadian

pipeline company Enbridge Energy does not cross any Indian

reservations, it does cross a large area of lakes and forests in

northern Minnesota where treaties give tribes the right to hunt, fish

Tribal members say they are especially

concerned about potential impacts on their right to gather wild rice.

Reservation was sometimes tense and emotional.

reservation to attend the meeting. "Shame on you," he

near McGregor, Minn., broke down in tears as she talked about how a

pipeline spill near Rice Lake would be devastating.

Ojibwe migration stories tell of how

food grew on the water.

"Wild Rice is very much an

integral part of our lives," she said. "It’s there for us

for our ceremonies, for basic daily living, and something we’ve had

sustainability, told tribal members she’d relay their concerns to the

company’s senior leadership. While she didn’t make any promises,

"There are very strong feelings;

spill in relation to wild rice," she said.

"On some of the issues, we have

shared values, common goals," she added. "No one wants to

threaten the wild rice in Minnesota."

Enbridge has hired a tribal relations

consultant. But several bands say neither Enbridge nor the state have

done enough to consult with tribes.

Public hearings on the need for

Sandpiper were held in Duluth, Bemidji and other cities, but not on

any reservations. The White Earth Band asked the Public Utilities

Commission for one. The agency declined.

In early June, both the White Earth and

Mille Lacs Bands will hold their own hearings on the pipeline

"We want to get our voice heard on

commissioner for the Mille Lacs Band.

have had a chance to be heard.

While he declined a recorded interview,

he said in a statement that tribal members have "submitted

The White Earth Band and a Native

American group called Honor the Earth are formal parties to the

Sandpiper proceedings before the PUC and have testified in several

But that’s not enough, said Winona

LaDuke, founder of Honor the Earth. The state should consult directly

"Nation to nation, we should act

band that are both holding hearings this week," she said. "But

instead the PUC is just going ahead."

The utilities commission is scheduled

to decide on Sandpiper’s "certificate of need" on Friday.

That’s the same day as the Mille Lacs Band’s public hearing, and just

asked the commission to delay its decision until they submit reports

But even if the commission rules the

pipeline is needed, that’s not the final say on the project. The PUC

would still have to approve a final route for the pipeline, a process

that will require more public hearings, and the PUC says, more