"If you don’t want to work hard, get an education, otherwise you’ll work hard labor like I did." So was the advice for Indian youth in an interview with 70 year-old James King, Sr., one of 82 graduates of the Red Lake GED program on May 20.

A ceremony, including cap and gown, was held at Seven Clans Casino Event Center on the Red Lake Indian Reservation in northern Minnesota. This was the first time such a formal GED graduation was held. The event started off with a banquet for invited guests and graduates, and included a procession of graduates who were smudged as they entered the events center, to the beat of drum group Eyabay. 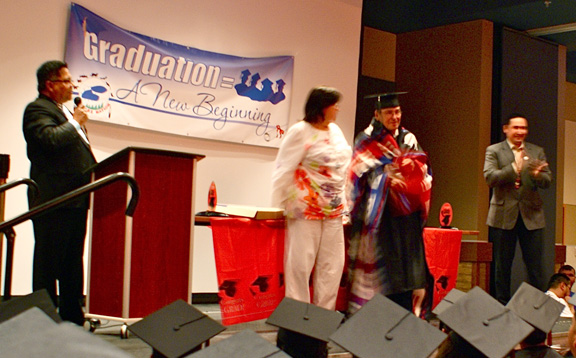 Perhaps the loudest applause was heard when the name of James King, Sr., the oldest graduate, was called. Following the presentation of GED diplomas, emcee Hanson called Jourdain and Perkins back to the stage for a special recognition for King. When Hanson introduced King, applause mixed with cheers and whistles erupted among his classmates, the decibels rising even higher when Hanson mentioned that King was "71 years old."

An appreciative wave accompanied by a big smile crossed the face of King as Jourdain and Perkins wrapped King in a Pendleton blanket.

Hanson narrated as the blanket was presented, "He showed up, displaying extra effort as he worked on getting his GED," Hanson said of King, "and he did very, very, well. And we’re very proud of him. Thank you Jim, you are truly an inspiration for our GED Program and Red Lake Nation."

As King was about to descend the stage, Hanson asked King if he wanted to say a few words. King avoided the question, saying instead, "You made me older than I am, I’m only 70."

King quit school back when he was 16 and went to work. "I would have graduated in 1958," said King. "When I started doing the GED thing, I told them I wanted to take the test they would have given me back in ’58. I figured that would be easier, but they didn’t buy it," King chuckled.

King lived in the Twin Cities and was gone from the reservation for 35 years. He returned home about seventeen years ago, and currently lives in the Little Rock district at Red Lake.

"I started thinking about getting my GED when my son, who will be 40 soon, finally got his GED a few months ago," said King. "My son quit school when he was 16, too. We were living in Minneapolis at that time. He asked me back then if he could quit, and I said ‘okay but you’re going to have to go to work’. You could still get away with that back then, not so today," said King.

"At first I wasn’t going to do it. Why would a guy my age do this, I asked myself. I figured I’ve made it this long, and in my line of work one really didn’t need an education," King said. "I’m not sure why I decided to do it, maybe a bunch of things," said King. "Maybe it’s my nature, maybe it was my son recently graduating, or maybe it was my granddaughter going after her GED." (Bambi King, James’ granddaughter, was among the 82 graduating with King).

"It didn’t take me long," King said, "only about 3 months. I studied by taking some of those practice tests to prepare for the testing. I took the math and social studies tests in Bemidji, the reading and science up at Red Lake. And then you have to write an essay, which I was a little leery of, but I did pretty good. I passed them all the first time."?

Asked if his classmates and family were proud of him for his achievement. "I’ve been married to the same woman for 44 years. Not sure about others, but my wife [Evie] is very proud of me. I guess that’s what wives do," King said with a laugh.

"Yeah, I suppose some of the kids seemed curious about me, proud of me. But the ones I’ve really noticed are the older ones guys I went to school with are talking now about getting their GED, which is kind of neat," King said.

When asked what’s next, King said, "Well, I’m more or less retired but staying active as I can. I’m on the (Red Lake) Fisheries board, I’m on the tribal enrollment committee, and I sit in on tribal council meetings pretty much just to be nosy."

"I also want to take a course in computers, my grandson’s got one, but I don’t know how to turn it on or turn it off. So I want to learn how to operate a computer. Seems like there’s a lot to learn there," he said. King added, "I’ve always worked hard, I’ve had a good life. Today kids need an education, it’s not like when I was young, now you need an education to get any kind of a decent job. I’m on total disability, the kind of work I did, I hurt my back a few times," said King. "Which is another good reason to get an education, you’ll have a better back."