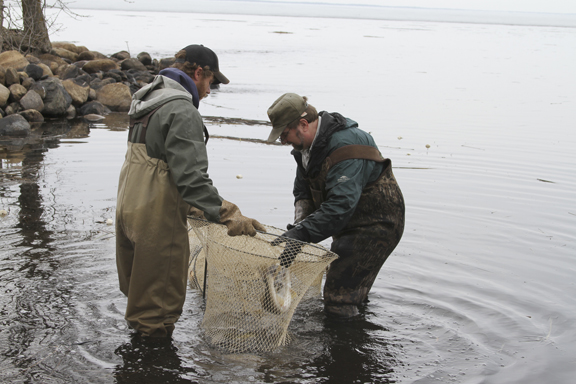 The walleye population in Lake Mille Lacs is the lowest in decades, and state Department of Natural Resources researchers are searching the lake for clues that could explain their falling numbers.

A DNR survey last fall found an average of 4.8 walleye in each of the agency’s test nets, down from about 15 or so per net in past years. But determining the size of the walleye population is a challenge, said DNR Treaties Manager Tom Jones, who helps oversee the relationship between the state and tribes that also fish the lake.

“Is it really five per net? Is it really a third of average? That’s what we’ve got to find out,” Jones said. “It’s a huge concern. We don’t want to do anything that would permanently harm the walleye population in Mille Lacs. This is the premier walleye lake in the state.” 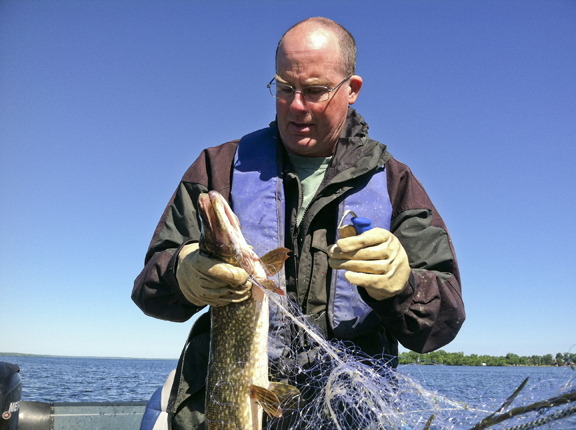 DNR researchers began a population study in May, a few days before the walleye season opener.

As ice still covered most of the central Minnesota Lake, Rick Bruesewitz, the DNR’s Aitkin area fisheries supervisor, crouched over a 24 inch walleye. In a practiced motion, he measured the size of the fish and checked its sex, before placing a small tagging gun near the walleye’s dorsal fin.

After using trap nets to catch fish that come into shallow water to spawn, DNR researchers punched holes in the fins of walleye and pike to estimate the population size. Once the tags are secured and the numbers recorded, they scraped off a few scales for DNA testing and release the fish.

Bruesewitz said DNR researchers aimed to catch and tag as many walleye and northern pike as possible early in the season to compare their numbers with fish being caught now. The agency’s goal was to tag 20,000 walleye in Mille Lacs, but this year researchers tagged only about 7,000.

To obtain an estimate, researchers take the total number of fish tagged in the first part of the study and divide it by the percentage of fish that have tags when they recatch them. The DNR goes into this level of detail every five years.

Among other things, the information helps the agency determine how many walleye fishermen may keep in a given year.

This year there’s more urgency. According to the latest annual survey, the walleye population is at the lowest recorded level in decades. Biologists want to know what a more in-depth population study will find.

The agency tagged only 7,000 in part because ice still covered much of the lake late in the spring, giving researchers far less time than the two weeks they typically have to tag fish.

For the past several weeks DNR researchers have been out day and night tossing nets into the water to try to catching as many tagged fish – including walleye – as possible.

With than in mind, Jones recently went out on the water with intern Sarah Botkin. After Botkin tossed a buoy an anchor into the water, an attached 300-foot net slowly slid over the slide.

“We have a buoy on each end,” Jones said. “We’ll come back and pick up one of the buoys and then as we pull the net back in the boat … hopefully there will be some fish.”

About 40 minutes after setting another two nets, Jones and Botkin returned to the first net and found one fish.

The walleye didn’t have a tag. But they recorded its information, tagged and released it.

The population study is critical, Jones said, because even though DNR officials think the walleye population in Mille Lacs is low, they want to be certain.

As for why walleye might be growing scare, Jones said there is a complicated set of possibilities, among them competition with invasive species and over-fishing of certain sizes of walleye.

“We don’t want to continue down the path we’ve been going down,” Jones said. “We want to make sure we know where we are and change direction and make things improve.”

The agency will begin analyzing the data later this summer. The DNR hopes to have a better estimate of the number of walleye in the lake later this year.