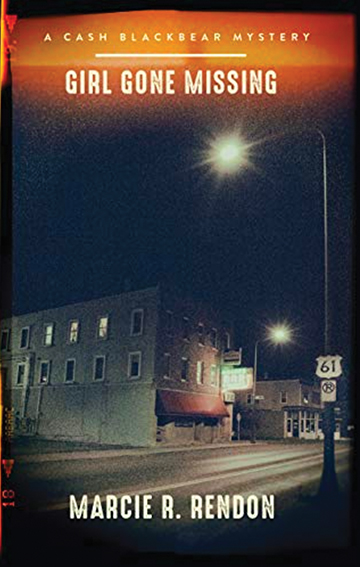 Darn that Marcie Rendon but she did it again. She wrote another book featuring Renee “Cash” Blackbear which invariably led to non-stop, compulsive reading and thoughts about the 19-year-old protagonist. Good grief. Like I don’t have other stuff to do.

This story, “Girl Gone Missing,” (available May 14) builds on Rendon’s “Murder on the Red River” which introduced the young Ojibwe woman who grew up in foster homes in northwestern Minnesota.

The newest book builds nicely on the first, giving detail on Cash’s life as well as the life of her mentor and perhaps only friend, Dave Wheaton, the local sheriff. Wheaton, aware of Cash’s intelligence and talent, encouraged her to enroll in college at Moorhead State. Classes start, and a female student in Cash’s science class disappears from school and the community. Some speculate that the girl ran off, a rumor her parents deny. Cash starts having dreams that feature terrified young blond girls, calling for help.

Then Cash learns of another girl’s disappearance, and later finds herself in the Twin Cities to accept a writing award. Ultimately she encounters a small group of disappeared girls, and works for their release. It’s here in the last third of the book that the story starts racing and again, I worried about Cash’s fate.

Why? Because Rendon has a keen ability to bring a character alive on the page and make you care about what happens to her or him. You care because if you know any young American Indian women, you’ll recognize one of them in this character. There’s a universality to Cash. Then there’s this. Maybe you’ll care about Cash due to hope that as the underdog, she will win against all odds.

Suggest to Cash that she’s an underdog, however, and you’ll get her characteristic blank stare and a look away. Her preservation instincts are finely honed, and she doesn’t give away much of herself. She has spent a lifetime separating what is real and worth bothering with from what is not. Cash would flip off a suggestion of weakness, and work the system to her advantage. For example, she learned that students can test out of classes. So, after years of self-directed study, she takes the exams and tests out. She learns early on that she can win money as a pool shark. So she practices until her reputation with a pool cue precedes her in every river town bar with a pool table. On the surface, should she deign to let you know her, Cash is calculating, smart and tough.

She’s also entirely human. “Girl Gone Missing” introduces us to a vulnerable Cash who misses an American Indian boyfriend involved with the American Indian Movement, and involved with his other girlfriends. Throughout the book Cash drinks a lot of beer, popping Buds with every opportunity and burning through cartons of cigarettes. Often it is only through nicotine or alcohol that Cash calms herself, a false balm that surely must backfire with time. After such a hard start in life, Cash needs hope. We’ll see what Rendon does with Cash’s addictions in later books.

Also, you have to wonder now and then about her diet of tuna sandwiches and jelly Bismarck pastries – when she remembers to eat at all. Cash’s days are long, and start with college classes followed by driving a truck through farm fields during the beet harvest, and then wind down at the local smoke-filled bar with a couple of Buds and a pool table. Cash! Listen up! Eat better! Sleep, for crying out loud. Put down the beer and preserve your many brain cells. The world needs smart, brave Indian women who can walk in both worlds and live long lives.

What Cash needs and seeks approval from is her protector and father-figure, Sheriff Dave Wheaton. He is the one person she can count on. She tells him what happened during her Twin Cities visit, leaving out the worst parts. Because the sheriff is a man of integrity and fairness, we can hope in a later book that he brings the perps to justice.

Then there’s the brother, who like a few real life Indian brothers, shows up, makes an impression and then one day leaves without warning. As young children, Cash’s two siblings were also placed in foster care, and she had no idea where they were. “Mo,” a Vietnam vet with Post Traumatic Stress Disorder, shows up at Cash’s efficiency apartment one night. A thoughtful guest, he makes a big breakfast every morning, cleans the apartment, and wins big at the bar pool tables at night. Mo is even better at the table than Cash. He turns out to be a shrewd and instinctive collaborator, and then goes away. Poof. No Mo no more.

The subtext to all of this is the true account of how foster care tore up Minnesota Indian families in the 1960s. “Girl Gone Missing” describes the disappearance of several white girls in small town Minnesota, but statewide hundreds of Indian children were removed from their families for reasons as flimsy as poverty. That ugly chapter of state history could be called “Children Gone Missing,” a chapter repeated at the southern border of the U.S. right now.

This is a good book. If you read it, block out uninterrupted time. It’s hard to put down.