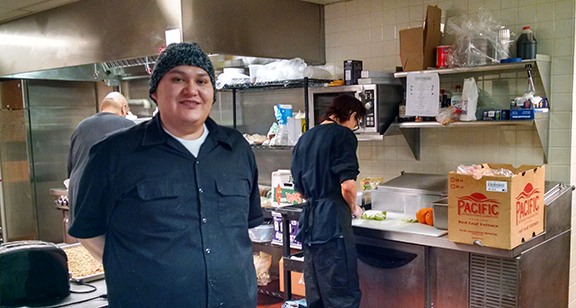 For many South Minneapolis area residents, the urban setting has done little to numb their taste buds or their cravings for foods they remember from back home on the prairies or from the north woods of Minnesota.

Since mid-February, a steady stream of customers has come to Gatherings Café in the Minneapolis American Indian Center (MAIC), 1530 East Franklin Ave., to grab specialties such as the Bison Melt and the Red Lake Walleye Melt.

“Those are the two favorites so far,” said Howasta Means, the café manager. “Our menu will change from time to time, and with the seasons. But those two items are here to stay.”

MAIC owns Gatherings Café but it is also a culinary arts training program. Among partners in the training program are the American Indian OIC, the Waite House programs in the surrounding Phillips Community, and the Little Earth of United Tribes.

At its opening on Feb.16, the café started serving breakfasts and lunches with two employees and two culinary students, said Mary LaGarde, executive director of the center. Word spread by social media and word of mouth.

“We’ve been surprised at the turnout,” she said. Only one week into operation, the Gatherings Café staff started seeing regular customers stopping in for breakfast on their way to work on Franklin Avenue.

The center hasn’t had a restaurant on the premises for the past two years. But with the new regulars starting to make nearly daily visits, and the senior citizens now starting to gather regularly for breakfast and lunch, the café is taking on a gatherings role commonly found at restaurants in small towns all over America.

For Means that is as it should be. “I’ve been coming here (the center) all my life,” he said.

The center was founded in 1975 and has served the Native American community of Minneapolis with educational, cultural and social services in the years since. Means was among neighborhood young people who would gather at the center.

Means has worked for seven years in the restaurant industry and is a 2011 graduate of the Le Cordon Bleu culinary school. While that casts images of upscale cuisine, the early offerings on the Gatherings Café menu suggest a fusion of tastes and recipes that will have special appeal to Native Americans.

Wild rice is a staple with other luncheon offerings, and locally raised greens and vegetables will be used in season, Means said.

Breakfasts (7:00 to 11:00 a.m.) vary from standard offerings found at most restaurants and coffee shops, to another fusion of upscale with Up North. The Ave Omelet, for instance, contains wild rice, bacon, carrots and craisins with béchamel sauce; there’s a Blue Corn Wild Rice Waffle, and there is a Roasted Sweet Potato Hash, with bacon, bell peppers, onion, cheese and two eggs.

There are no plans to extend the café hours beyond the 3 p.m. lunch closing, Means said. But Gatherings Café will do special events at the center, or off premises, and offers a catering service.

One early customer who is especially pleased the café opened is Charlie Stately, proprietor of Woodland Crafts, a retail gift and crafts store also in the Minneapolis American Indian Center. The café brings people to the center, and that is good for both commercial enterprises.

“It makes us a destination point,” Stately said. “It’s been busy here since the café opened.”

The restaurant’s “good reviews” from early visitors is strengthening traffic in and out of the center, he said.