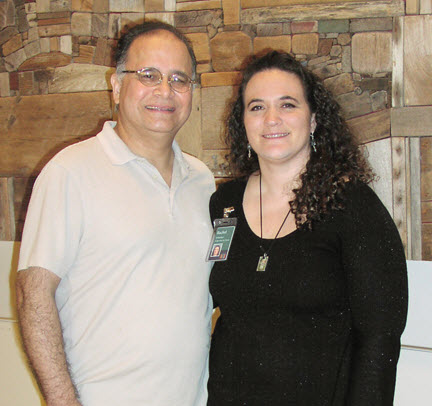 The Minneapolis Institute of Arts (MIA) recently graduated 17 tour guides for their Native American collection, in the Collections in Focus (CIF) Guides Program. The Native Americans who completed the training include: Doug Limón (Oneida), Rachel Limón, Janet Gratton (St. Croix Ojibwe), John Hunter (Winnebago/ Creek/Seminole), Ardie Medina (Lac du Flambeau Anishinabe), Amanda Norman (White Earth Ojibwe), Roy Taylor (Choctaw/Pawnee), and Marne Zafar (Lenape/Peigan).
The highly competitive program last offered the rigorous course about the American Galleries in 2001. Volunteers met on Thursday evenings and Saturdays as they prepared to lead tours of the Native American collection at the museum.
Some of the graduates are old hats at this. Gratton, Medina, and Hunter have been guides since 2001, and Taylor has been a guide since 2006.
Two of the new graduates, Doug and Rachel Limón, are a husband and wife team who decided they wanted to learn more about Native American art – both from their own culture and throughout the Americas. Doug is a bead artist and is a descendant of the and an enrolled member of the Oneida Nation in Wisconsin. Rachel is in the process of researching her ancestry, but she believes she may have roots in the Oneida tribe of New York. She does photography, pottery, jewelry and painting.
Doug and Rachel met at a Spiritual Art show St. Boniface in Northeast Minneapolis several years ago and then at an opening party at Ancient Trader’s Gallery where Doug’s work was featured in 2008. They share a love of art and Native American culture and decided they wanted to become volunteer guides together to enrich their understanding of Native American art history.
Doug said he found out about the CIF program through an email notice. After speaking about it with Rachel, they decided that though it would be a big commitment, the program was something they wanted to do together. “It’s been pretty intense,” he said, but in the end the training has been a rewarding experience, and Doug even had the opportunity to share his own knowledge of Anishinabe beadwork with the class.
Amanda Thompson Rundahl, who runs the MIA’s Collection in Focus Guide Program, said that CIF originated in 1998 as an opportunity for attracting a more diverse group of volunteers.
“We wanted more voices, from different perspectives and ideas than the museum was traditionally able to support,” Rundahl said.
Past training topics include the arts of Africa, China, Japan and Korea, South and Southeast Asia, and the Pacific Islands.
Doug and Rachel have now completed all their CIF training and their “checkout tours” where they are evaluated based on their performance leading a group through the Native American galleries. They’ll have a graduation ceremony on July 25, and will then commit to at least a year of volunteering once or twice a month, leading both public and private tours, and facilitating hands on experiences with the museum’s art cart.
The format of being a CIF guide is conversational, so even if they are talking about a piece of art that they are less familiar with, they can enter into a dialogue about the piece with the group they are leading.
The Native American galleries are located on the 2nd floor of the museum, and cover Native cultures from North, Central, and South America from Ancient Times through today. Joe D. Horse Capture, the curator for the galleries, said that in his tenure as curator he has transformed the collection, which take up three rooms, from a chronological layout to a geographical/cultural one. Horse Capture said the reason for moving away from a chronological format is to focus on the artistic and cultural continuity between ancient, historic and contemporary art that exists within each region.
For example, Doug and Rachel love the work of Maria and Julian Martinez, another husband and wife team of artists based in Southwestern United States. Maria Martinez, who died in 1980, incorporated ancient pueblo pottery techniques into her contemporary work.
In some cases the cultural regions are not completely cut and dry. For example, there might be a tribe that is located in the middle of two different regions that would incorporate elements of both region. Also, in the case of the Mississippi Valley region, which contains tribes that are no longer in existence, elements from that region can be found in the work of artists from the plains region. For example, a number of the Anishinabe bandolier bags contain symbols and themes that are reminiscent of Mississippi region art.
Horse Capture said that the MIA doesn’t have any sacred objects in its Native American collection, because as a Native person himself, he doesn’t feel comfortable displaying that kind of object in a museum. He also said that sacred objects, though powerful, are not usually beautiful. Instead, he looks for high quality artwork of cultural and artistic significance. “We’re an art museum, not a historical museum,” he said.
As for Doug and Rachel, they’re excited about delving into their new roles as CIF guides, and will continue to broaden their expertise as new pieces are added to the collection. They also continue to create art themselves and are active in the Native American art scene in the Twin Cities.