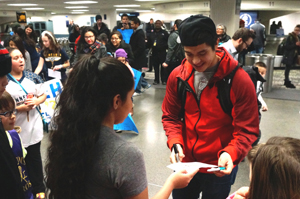 Lyle, arrived in the Twin Cities on Jan. 2 to a hero’s welcome

before he had even played in his first National Lacrosse League game.

Club youth players, coaches and families joined other members of the

local Native community to greet Thompson with banners and an honor

song as he arrived at the Minneapolis airport. He was all smiles as

The next night, Thompson scored three

Clan Mohawk from Six Nations) – accounted for more than half the

scoring, with Tao and Hill adding two goals each.

When Hill fed Thompson the ball for one

of his goals, a group of fans in the corner of the arena held up a

It was just the sort of welcome and

excitement for the Creator’s game that Thompson was expecting.

“When I was talking to different

where I wanted to play, my brother Lyle told me about Minnesota,”

Thompson said by phone before he boarded his flight to Minnesota. “He

said the Swarm draws a big crowd and they really love lacrosse.

That’s really how I decided I wanted to come to Minnesota.”

Miles was the Swarm’s top pick in the

Cayuga, who plays this year on the Swarm’s practice squad. Tao,

drafted by the Swarm in 2011, played on the practice squad most of

last season but returned to a starting role in 2015. Hill, played for

the Swarm from 2006-09 before he was traded to Washington, then

Colorado. He was re-signed by the Swarm as a free-agent last summer.

On the sidelines for the Swarm,

season with the team. Caines has been very involved in spreading the

game in native communities across Minnesota, including leading

Thompson, too, wants to help grow the

“My brothers and I have camps that we

run, Thompson Brothers Lacrosse, and we want to grow the game as much

as we can,” he said. “This is our game as native people, so we

Minnesota and work with the youth.”

The Swarm play their next three games

on the road, returning to The Hive Feb. 6 for Native American

Heritage Night and a game with the defending NLL champion Rochester

Knighthawks. The game will be sponsored by the team’s 2015 partner,

When asked if he had a message for the

come out to Minnesota and I’m looking forward to meeting all of you.”

He got a pretty good start New Year’s

American Heritage Night or to buy tickets, call (888) MN-SWARM or

Art Coulson is a veteran journalist

and member of The Circle board. His book, The Creator’s Game: A

Story of Baaga’adowe/Lacrosse, was published in 2013 by the

PHOTO: Miles Thompson signs autographs for the youth in the Twin Cities Native American Lacrosse Club, who came to welcome him as he arrived in Minneapolis on Jan. 2. (Photo by Alfred Walking Bull)

39, finished his seventh season of coaching with the Minnesota Swarm

in 2014. He also serves as the Director of the Swarm’s Youth Box

League and the head coach of the Jr. Swarm program. Prior to

coaching, Caines spent five seasons in the NLL from 2001-05 with the

began playing lacrosse in Windsor, Ontario where he played minor

lacrosse. He later played for five years in the junior “A” league

with the Sarnia Pacers. The Winsdor native also spent time in the

Salmonbellies and in the Major Series Lacrosse (MSL) for the Brampton

Excelsiors, Akwesasne Indians and Barrie Lakeshores. Caines has been

active in the local lacrosse community in his time with the Swarm. He

serves as the head coach at East Ridge High School, and is a former

assistant coach for the University of Minnesota Men’s Lacrosse Club.

In the summertime, Caines directs youth lacrosse camps on the Fond du

Lac and Prairie Island reservations in effort to help restore the

Draft by Minnesota out of Brock University. The Scarborough, Ontario,

assists) over two seasons. During the Stealth’s runner-up finish in

29 loose balls in the regular season. As a member of the Colorado

played. He signed a Free Agent Contract with Minnesota in the summer

a 20-year-old forward from Ohsweken, Ontario, was the No. 10 pick

forward from Coquitlam, British Columbia, was selected by Minnesota

Robert Morris University. Tao, who lives in the Twin Cities, has been

quite visible in the native community, speaking at schools and

helping with lacrosse camps on Minnesota reservations. In 2010, Tao

first in the nation in shooting percentage, scoring on 53.2 percent

of his shots at RMU.

24, won the Tewaaraton Trophy in 2014 with his brother Lyle, becoming

the first native players to win the college lacrosse equivalent of

the Heisman Trophy. Thompson, a righ-handed forward out of the

University at Albany, was the Swarm’s top pick (third overall) in

the 2014 NLL draft. Thompson, who plays summer lax with the Rochester