Blue Cross and Blue Shield of Minnesota has gathered poll result proof that the general public still has problems recognizing the everyday barriers to good health and safe living that confront Native Americans, African-Americans and other marginalized communities in Minnesota.

A recent poll conducted for the large Minnesota health company showed the vast majority of Minnesotans – 83 percent – agrees that everyone deserves to live healthy and safe lives. But less than half of the state’s poll respondents agree on what makes barriers holding people back and endangering their lives.

“Our positive outlook on the world can sometimes cloud the reality that poor health can come from discrimination,” said Dr. Craig Samitt, president and chief executive at Blue Cross / Blue Shield, prompting the health company to say we need to expand the concept of our “Minnesota Nice” culture. 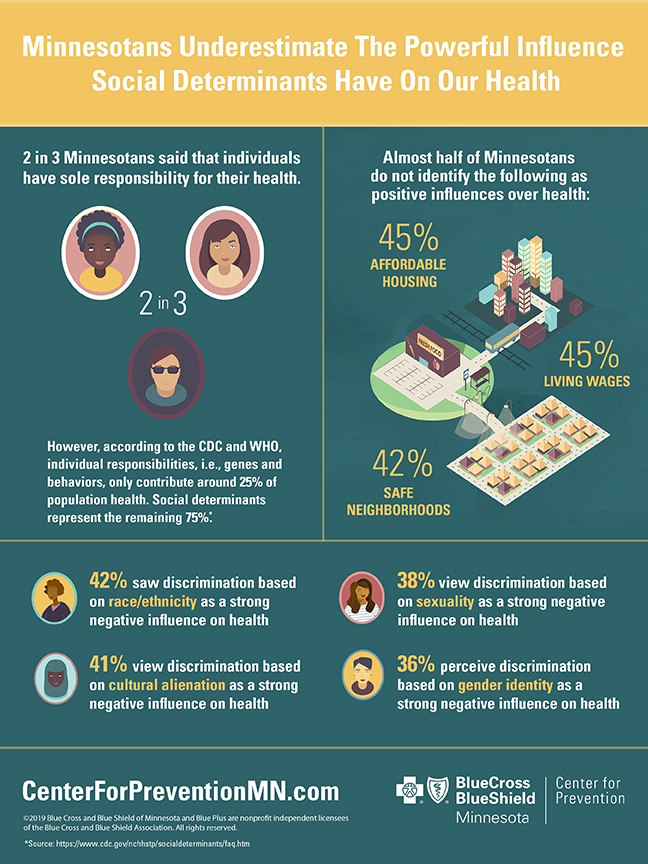 Discrimination based on sexuality and gender identity was even lower, with 38 percent and 36 percent responses, despite well-established health and welfare research showing social inequities impact health disparities such as infant mortality, cancer, suicide rates and diabetes and various other diseases.

With infant mortality, for instance, American Indian and African-American infants die at twice the rate of white babies during the first year.

Dr. Dan Trajano, senior medical director for programs that address social determinants of health for Blue Cross / Blue Shield, said poll findings of a “disconnect” among Minnesotans with barriers to better health have been known for a long time. However, he said, the poll results “quantify what health professionals and community leaders are coping with.” This, he said, will help public awareness of what public and private groups are doing within communities.

“It is well known that Minnesota has some of the best health care in the country, and some of the greatest inequities,” Dr. Trajano said.

This leads to both a big health issue and an economic issue in Minnesota, he added. Overcoming health disparities and inequities can save 700 lives a year in the state and $2 billion in lost money, he said. “Employers have a huge stake in this as well.”
Health organizations partner with government units and nonprofit groups to work within communities, “because the grassroots efforts within communities can really get results,” he said.

For instance, he and colleagues at Blue Cross /Blue Shield work with Minnesota Communities Caring for Children that includes tribal government agencies. Other efforts working within the Native communities, such as Dream of Wild Health that seeks to improve Native health through better diets and locally produced foods, show how work within communities are successful, he said.

The term “social determinants of health” is more a social science creation than a medical science diagnosis. But they have been thoroughly studied both nationally and globally.
The federal Centers for Disease Control, in a Healthy People 2020 report, lists five key areas for SDoH. They include economic stability, education, social and community context, health and health care, and what it called neighborhood and built environment.
All five come up short when discrimination and inequalities form barriers to access. They are also consistent with nine original areas of social determinants under study by the United Nations’ World Health Organization.

That latter area of study may be as far removed from the general public’s knowledge as the concept of social determinants of health. But again, United Nations and World Bank studies show a global rural-to-urban migration underway that is equal to the size of India, in one study, and of the population of China in another.

Thus, urbanization pressures should sound familiar to Minnesotans and most Americans who have witnessed it happening here since World War II. It is a contributing factor in the sizeable Native American population in the Twin Cities metro area and other cities across America.

The Blue Cross / Blue Shield research will help all community groups, such as MIWRC, in their work, she said. The poll results did show most Minnesotans (62 percent) appreciate the impact that violence and trauma has on individual health, and this awareness is starting to show itself in how public bodies are responding.

“I’m glad to say not everything is negative news,” Park said. “There are some positive signs all around.”

Look at the bulletin boards at the Minneapolis American Indian Center, for instance. Groups offering personal assistance, health and other key services have information available on how to access help.

There is a good and growing number of public and nonprofit agencies working on overcoming social determinants’ influence on health and safety. What’s more, Park added, there are positive signs public bodies are recognizing what the Blues’ research exposes.

Park and her group participated in a first Indigenous Women’s March and powwow on the Saturday before mother’s day. It was an ad hoc event sponsored by several organizations and promoted through Facebook connections.

Meanwhile, the Minnesota Legislature approved legislation brought by Rep. Mary Kunesh-Podein, DFL-New Brighton and a Standing Rock descendant, to create a Missing and Murdered Indigenous Women Task Force to track violence against Native women. Kunesh-Podein got overwhelming bipartisan support and explained to lawmakers that Indian women are 10 times more likely to be murdered than women in the general U.S. population.

The state representative was also a key player in the Legislature increasing funding by $78 million for emergency shelters, rental assistance, housing preservation and new construction in the tight housing markets that create problems in various parts of Minnesota. And the city of Minneapolis, meanwhile, has increased programs to assist affordable housing construction and rental property.

“We are getting better,” MIWRC’s Park said. “Minnesota is an amazing state, on the tops of most lists, mostly for the white people. But young people are seeing strength in community.

“We seem to be in a better position today than we were a generation ago,” she said.