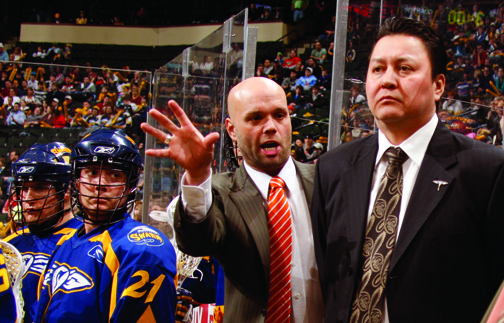 The new owners of the Minnesota Swarm professional lacrosse team in St. Paul build outreach program to the Native people in the Twin Cities and Minnesota.

Baseball might be the all-American sport, but lacrosse is a game that can only be called the First American sport. Eastern nations such as the Cherokee and the Haudenosaunee (people of the Iroquois Confederacy) consider lacrosse to be a game given to them by the Creator. Lacrosse still enjoys deep religious and cultural ties to these First Nations.

Swarm professional lacrosse team in St. Paul hope to build on with an

aggressive outreach program to the 55,000 native people in the Twin

Cities and greater Minnesota and a renewed commitment to developing the

to their heritage,” said owner John Arlotta. “Our hope is that the

Lacrosse League are made up of 23 percent American Indian players.

Lacrosse is not just the oldest, but the fastest growing sport in the

American Indian Community in March at the team’s headquarters to

brainstorm ideas for increased involvement in the local native

community and suggestions for an American Indian night planned for the

Among the attendees were representatives of St. Paul, Minneapolis and

as well as native business owners, parents and youth. The group urged

their outreach to native youth had a strong cultural component.

afternoon with a player clinic on the field for native youth. Travis

Hill, a hard-hitting defenseman and crowd favorite, will be on hand to

inspire the next generation of native lacrosse stars. Hall of Famer

Duane Jacobs, coach of the Swarm and native of the Six Nations Reserve

in Canada, will join Hill for the clinic and a private

“Eventually, we would like to bring the traditional outdoor game to

Minnesota and allow our fans to learn more about lacrosse. With the

help of the native community, we can encourage children to be excited

lacrosse into schools with significant native student populations. The

members to strengthen relationships and gather ideas for more