Native Americans are often rendered invisible to the wider population due to stereotypes and misconceptions about who we are, factors that are a direct result of the settler-colonialism that has taken place across Turtle Island. To many, we are either feathers and buckskin, or we simply do not exist at all because “there are no real Indians left.” These damaging thoughts have plagued Native peoples for generations and have threatened our sovereignty as tribal nations. Luckily, there are those like Caitlin Newago who are here to take a stand by highlighting our presence.

Newago is an Ojibwe multimedia artist and owner of Bizaanide’ewin Beadwork and Supplies, her online store where she sells her artwork, the majority of which blends traditional Ojibwe designs with contemporary styles. Newago says that this aspect of her art is quite intentional. “When people reference Native art, or just Natives in general, we’re these historic figures, or [makers of] this ancient art, like we’re from a completely different time. People aren’t realizing that we’re still here. I think combining these mediums and pushing my way into more contemporary styles of art, while still maintaining that Ojibwe influence, kind of shows more [of our] presence in the world.”

Evidence of this can be found in some of her jewelry, which spans from birch bark-backed beaded earrings to metal hoop and resin-based ones, as well as her apparel, some sporting Ojibwe floral prints and others displaying phrases like “You’re on Looted Land” and “Blood Quantum is a Tool of Genocide.” 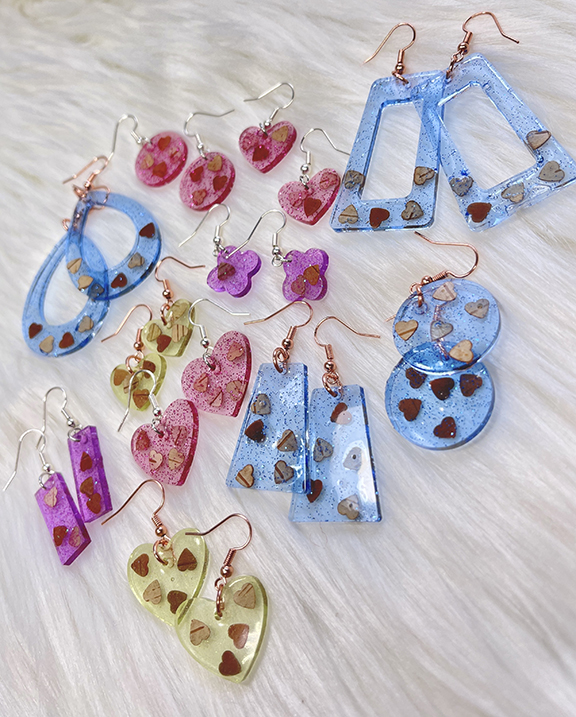 In regard to her resin earrings, Newago said, “It’s actually pretty cool, being able to construct these earrings in a way I’ve never done before and put my own Indigenous spin on it.” “Not everyone wants to wear big ass beaded earrings, you know? [There’s] a lot of fake Native art out there and I wanted to provide an alternative, so someone can support a real Native business and still get that same aesthetic that people are looking for, without having to go down the route of cultural appropriation.”

Despite her art having a heavy Ojibwe influence, Newago hasn’t always had such a strong connection to her identity as an Ojibwe woman – she described her artwork as an act of reconnecting with who she is. Born in Ashland, Wisconsin, Newago grew up in Green Bay and, being Oneida as well, attended the Oneida tribal school, though she spent a lot of her adolescence on the Bad River reservation. “I kind of bounced around a lot throughout my life. I lived in Madison for six years, and then I moved back home. Now I’m living in Eau Claire.”

“Because of the way I was raised, I didn’t really have a huge opportunity to immerse myself in the culture and learn things. When I left an abusive relationship and kind of started my life over from scratch, I decided to re-immerse myself into my art. [At the time], I was living close to home, and I had the opportunity to finally learn these things.” She learned from her father how to harvest birch bark, which she initially used to paint on for her earrings. This interest then evolved into practicing quillwork, which she continues to experiment with.

Newago’s reconnection to her identity hasn’t stopped at learning traditional art forms – she’s also become more involved in her community. “I go to the round dances and winter camps at Bad River, and I started going to council meetings. I learned how to rice and we donated [our harvest] to the elderly in Bad River.” Newago cites her role of a mother as a major influence that keeps her on her journey. “One of the things I really try to focus on is that as I learn, I try to teach my son because he’s the next generation. It feels selfish to take all the knowledge for myself and not try to pass it down. I take very seriously my role of being a mother to an Ojibwe child.” 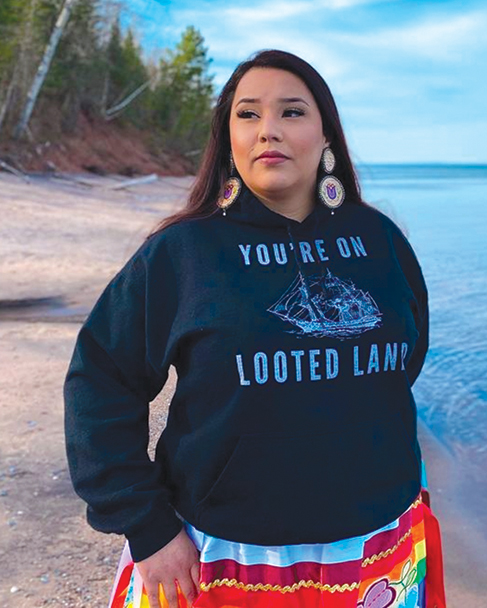 She also recognizes the significance of her artwork in the political sphere. Most of her apparel displays some kind of message, whether it is seeking to raise awareness for reproductive rights through the use of Ojibwe floral print, or provocative phrases on the fronts of shirts like “You’re on Looted Land” and “Not Today Colonizer.” Again, this is an intentional aspect of Newago’s work. “It’s how I put myself in my work. If I’m just drawing flowers or beading or whatever, it’s not something I’m really passionate about. I have the technical skills to do these things, but it’s just not who I am. I’m a very political person, and I’m very invested in human rights and things of that nature. I’m chronically ill and can’t go to the protests and things like that, and because I’m this loud, outspoken kind of person, I wouldn’t do well running for office, [so] I’ve sort of accepted my role in this whole movement.”

And it’s quite evident that she’s participating in this movement. With over 8000 followers on Facebook and over 4000 on Instagram, Newago has received widespread recognition for her work since Bizaanide’ewin’s inception in 2016. Her latest pieces are resin earrings with flecks of birch bark in them, as well as ones that house quills, which again reflects Newago’s style of blending Ojibwe and contemporary forms. When asked if there was anything new from Bizaanide’ewin to look for in February, she replied, “I have another earring collection release planned for February. [They have] a different political statement on them, though these ones are a little edgier.”