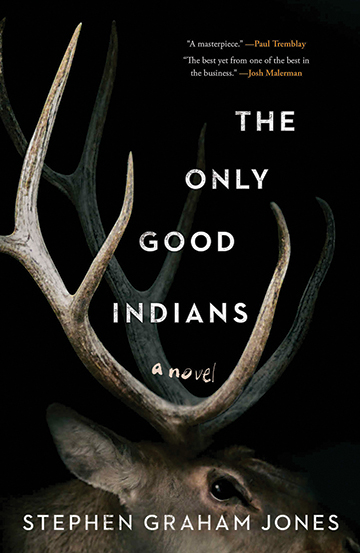 If you only read one horror/slasher novel in your life, make it “The Only Good Indians” by Stephen Graham Jones (Blackfeet). If you’re not familiar with the horror genre, expect at the very least to wince as the story unfolds, or to abandon the book altogether to calm your mind.

However, the need to know what happens – plus the joy of reading exceptional writing – means you’ll pick it up and read through to the story’s satisfying end. Still, that ending may lead to a few days of sleeping with one eye open.

The book’s overarching theme is a horrific act of revenge for wrongful deeds that even the innocent must pay. That’s the horror genre for you, making the innocent pay, and often, that’s life. A terrifying realism runs through the story similar to that found – on a lesser scale – in the novels of Louise Erdrich (Ojibwe). In an interview livestreamed on YouTube last year, Jones said that Erdrich’s “Love Medicine” was one of his favorite books ever. No surprise there.

The story opens with Ricky Boss Ribs who ran away from the reservation to Williston, North Dakota where he works with a drilling crew. He left home after his younger brother, Cheeto, died from an overdose. In the parking lot of a bar one night, Ricky witnesses a herd of elk bashing in parked vehicles. The vehicle owners presume that Ricky did the damage, and kill him.

Then we learn about Lewis Clark, who lives with his non-native wife in Great Falls, Montana. Ten years earlier, Lewis, Ricky, Gabriel and Cassidy discovered a herd of elk in a reservation hunting area reserved for elders. They shoot nine elk including one that was pregnant. Lewis convinces himself that the elk had it coming: they should have bedded down earlier or they should have wandered to a hunter-free part of the reservation.

Now a postal worker in Montana, Lewis begins to see elk apparitions such as the head of an elk on the body of a woman, or an elk fetus in the living room. He descends further into mental illness after his dog is trampled by a phantom elk. Lewis kills a postal co-worker who is a Crow Nation member, and later dies when shot by the highway patrol.

What do you think so far? A stroll down the sunny side of the street, eh? The horror is blended with a striking ordinariness, such as the assembly of a sweat lodge whose frame is draped with sleeping bags and clothes, and the making of macaroni and cheese, and the practice ritual of a gifted basketball player.

To the ordinariness and horror, add a layer of conflict on the impact of American Indian history on contemporary Indian life. The flawed characters crafted by a talented, astute writer often stop to reflect on their Indian-ness. Is any Indian more Indian than the next because she or he knows “tradition?” How accurate are those “traditions?” How do they fit into modern life?

Ricky recalls Indians who said they should have been born 150 years ago. What those Indians don’t know is they’d be the same people in the same place, only 150 years earlier. Throughout the book, Jones doesn’t really weigh in on the merits of tradition during non-traditional times; he simply has fun tossing out cherry bombs.

In fact, that may be a way to describe the book. You’ll read along, entertained by the description of snowfall, high school basketball, trees, dogs, trucks, and then – wham: Jones clobbers with five pages of vicious vendetta-getting. It reminded me of driving on the freeway past a crash. You hope no one died or was injured, yet you gape wide-eyed into the rear view mirror at the metallic wreckage and destruction.

The book’s gore is its most memorable feature – the garage slaughter of the Crow postal worker is unforgettable, right up there with the tipping of a body into a wood chipper in the movie “Fargo.” Oh, and watch out for the way dogs meet their demise. If I had edited “The Only Good Indians,” fewer dogs would die.

That’s the nature of horror, I guess. It’s not for everyone.

Stephen Graham Jones (Blackfeet) is a National Endowment for the Arts fellow who has published more than 20 books and hundreds of short stories. His experimental, crime, horror, and science fiction has garnered many awards, including the Bram Stoker and Jesse Jones Awards. “The Only Good Indians” was published in 2020. Jones is a Professor of English at the University of Colorado Boulder.

Anton Treuer on language revitalization and the Rosetta Stone