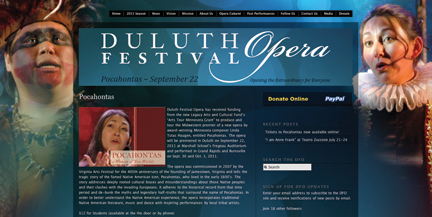 In October, Pocahontas-Woman of Two Worlds, a new opera composed by Minnesotan Linda Tutas Haugen, was performed at the Burnsville Performing Arts Center. After the show, over 100 community members – many of them protestors from the Native American community – shared their views during a sometimes heated discussion. While emotions expressed that evening have cooled, questions about the funding of the production linger.

Despite efforts by the opera’s composer Linda Tutas Haugen and librettist Joan Vail Thorne to avoid the Disney pitfall of turning Pocahontas into what noted Native American historian Helen Rountree called  "a buckskin-clad Barbie" they walked right into the heart of the problem: whether it is opera or animation, the story of Pocahontas is still a story of oppression of Native Americans.

Members of the local Native American community found reason to protest yet another retelling of this tale – paid for with money from the state’s legacy amendment arts fund. The Duluth Festival Opera received a $94,000 Arts Tour Minnesota grant from the Minnesota State Arts Board to take the show on a four-city tour this fall.

As part of the clean water, land, and legacy amendment to the Minnesota Constitution, passed three years ago, a portion of the state’s sales tax goes to an arts and cultural heritage fund. The money "may be spent only on arts, arts education and arts access and to preserve Minnesota’s history and cultural heritage.

Duluth Festival Opera asked Lyz Jaakola, an operatic mezzo-soprano and member of the Fond du Lac Band, to work with the production as an "artistic partner" from the local Native American community, a requirement of the State Arts Board grant.

Jaakola focused on bringing Native Americans into principal singing roles. Reportedly, Jaakola quit the production before it received the grant and believed it stood little chance of meeting State Arts Board criteria. She was not only surprised when the production got the grant, but that her name was on the application as "an artistic partner." During the discussion after the performance in Burnsville, Jaakola stood up and said, "I was lied about in the grant. Whoever wrote it lied about my participation to get money from the State Arts Board."

In the end, the Duluth Festival Opera production was structured much as it was in Jamestown where, according to a positive review in Opera Today, it successfully provided "local color," with the addition of three Native American songs delivered by a vocal and drum duo from the Haliwa-Soponi and Appomattox Tribes. Although, it was noted, this addition stood "outside the score and contributed little to the story." The Duluth Festival Opera production similarly included song and dance performed by members of the Fond Du Lac singers.

In a Duluth News Tribune article, Duluth Festival Opera director Craig Fields defended the decision to hold "blind" auditions, valuing talent over heritage. Fields noted, "My personal feeling is that the work succeeds on its own merits, whether it is performed by a Native American or not."

But when the Duluth Festival Opera cast Pocahontas without Native Americans in principal roles, it made headlines in state and even national new sources such as Huffington Post.

For members of the Native community, the issue is not just one of Native voices missing from the cast of singers – the voice of the Native storyteller is not being heard.  Former AIM chairman Frank Paro, explained it this way after viewing the opera’s performance, "Our point in demonstrating is – white people telling Indian stories in movies, comic books, now the opera "honoring" us – with all respect for these five Indians who got up [referring to the Fond Du Lac Singers] Native Americans would do it better."

In August, Governor Mark Dayton appointed Dr. Anton Treuer, professor of Ojibwe at Bemidji State University, to a four-year term on the Minnesota State Arts Board. That’s an important step in the right direction, according to author Heid Erdrich (Turtle Mountain Ojibwe),  who has followed the Pocahontas opera debate. She states, "American Indian/Native artists should work together now. We should write an Indigenous Arts Declaration of some sort that funders can use to educate panels, to make clear to the funding world that we do not want to be token artists or audiences, that we want to tell our own stories through our own art which may not conform to expectations of "Indian Art" that many people hold. We should also sit on panels for arts funding and understand the complexity of the process and suggest ways to improve the system."