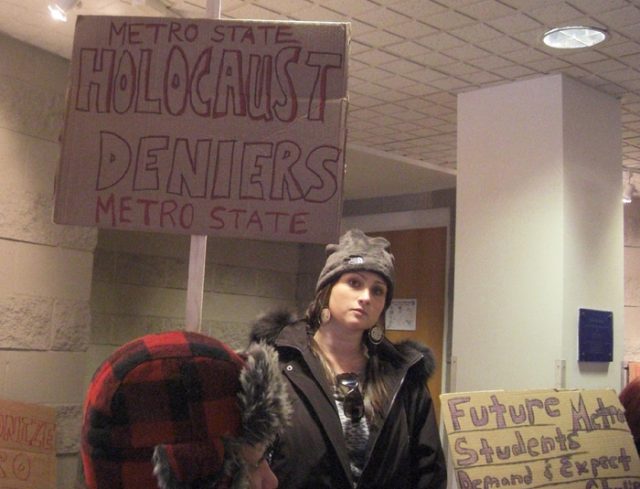 This last December students of Metro State University held a protest rally to decry the lack of Native American Studies classes on their campus. Specifically, the students came together to protest the fact that two classes; ‘American Indian Spirituality’ and the class ‘Genocide, Survival, and Recovery’ were not being offered in the spring of 2012, the 150th anniversary of the War of 1862.

One of the professors involved with the protest, Dr. Chris Nunpa, took the time to explain the grievances of the student body. "I had talked to the ethnic chair department, and told them these classes should be taught in the year 2012, in that it represents important years in the history of the Minnesota Dakota peoples as well as the state of Minnesota itself," Nunpa said.

Dr. Nunpa is a Professor of Native Studies, and would have been scheduled to teach the two classes at Metro State. When students learned that they would not be attending classes with Dr. Nunpa this semester, they sprung into action.

Students who helped to organize the event included Shannon Geshick, Zack Anderson, Matthew Sanchez, Keith Van Beek, and Di Roberge, among others. Word about the rally was spread through social media such as Facebook and Twitter, and the event attracted nearly a hundred protesters.

A flier for the event stated simply, "We are Angry and want a Change of priorities!"

The rally met at Indian Mound Park. A traditional Dakota blessing preceded the march down to Metropolitan State University where the rally was held. Students and faculty involved in the movement stressed the importance of holding a non-violent, educational protest.

"A student had once complained in my classes that I had created a hostile environment by discussing these matters. You see, the things I talk about in lecture, they may be uncomfortable subjects if you’re American, if you’re Christian, if you’re white. No one wants to hear their own bad history. But the facts are when we’re talking about the aggressive taking of land, you have to ask, who did that? When you’re talking about the breaking of over 400 treaties, you have to ask, who broke those treaties?" Nunpa said.

"When I talk about genocide and the fifteen million Natives who were killed since the 1500s it is considered controversial; it makes others uncomfortable talking about the past. But not too many people know about this history, and eventually, if no one knows about it, its no longer history at all."

One hundred and fifty years ago, the Dakota Wars of 1862 were fought after food shortages and a lack of government response to the reservations calls for aid led Dakota leaders to attack settlers on Native lands in an effort to drive them out. The war lasted approximately six weeks, ending in the trial of 425 Natives Americans. 303 were sentenced to death, and ultimately, 38 Dakota warriors were hanged in the largest mass execution in U.S. history in Mankato Minnesota.

The forced march of approximately 1700 Dakota women and children to a concentration camp at Fort Snelling took place on November 7, 1862. The continued relocation, movement, and oppression of the men and women involved in the Dakota Wars lasted for years after the initial trials. The incarceration took its tool, and eventually as much of a third of the imprisoned men died from poor conditions in U.S. Federal custody.

Dr. Nunpa is passionate about the subject, but gives credit to the students who organized the event. He says without their focus and efforts this rally couldn’t have happened.

"I’m retired. I don’t need to teach. But I guess I have this corny notion; I like to see the light bulbs light up above student’s heads when they understand some of the lessons history gives us. One of the most important concepts I can teach my students is to engage in truth-telling, and to do so fearlessly," Dr. Nunpa said.

According to the protestors’ petition that was posted on Change.org, "The Fall of 2012 coincides with the 150th anniversary of the Dakota War, and this class would be an integral part of the efforts to teach the truths that the Minnesota Historical Society would prefer to hide:

o The truth about the forced marches of women and children, and the brutality suffered by those forced to march at the hands of the white inhabitants of towns such as Henderson and New Ulm

o The truth about the concentration camp at Fort Snelling, such as children used for target practice and soldiers urinating on the womens’ tipis at night

o The truth about the mass burning of sacred objects such as pipes, and the "winter counts" of the Dakota — their census and history records destroyed by the fires of Bishop Whipple

o The truth about the bounties placed on Dakota scalps by Minnesota’s first governor, Alexander Ramsey

o The truth about the largest mass execution in US history — 38 Dakota warriors hung the day after Christmas in 1862, after flawed trials, some of which lasted no longer than 5 minutes

o The truth about the continued exploitation of Dakota land and the effects of genocide, exile, and dispossession on the survivors of the Dakota Holocaust."