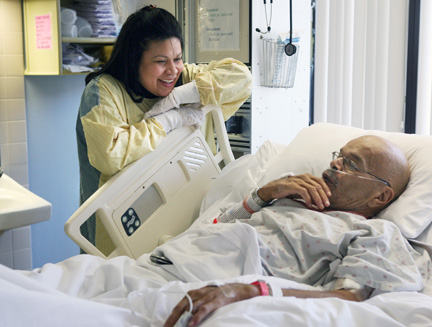 American Indians are six times more likely to die from tuberculosis and twice as likely as other Americans to die from diabetes. Doctors and others familiar with the disparities between American Indians and the rest of the population say using specially designated advocates can improve care for Indian patients while they're in the hospital. It also can improve health outcomes once patients return home.
That's what Aida Strom does every day. It's her job to make sure American Indian patients at Hennepin County Medical Center have everything they need.
Strom visits patients to ask how they're feeling and relays their concerns to social workers and medical staff. She resolves complaints, arranges for spiritual leaders and clarifies medical information for families.
"My role is, for lack of a better term, like an interpreter's role," she said. "There are some real strong cultural identity issues that Indian people come with in the hospital."

For example, Strom said, hospital staff could get overwhelmed when a patient's extended family holds vigil at the bedside.
"I'm from the Sisseton Wahpeton Dakota Oyate, which is in South Dakota," she said. "That's a super-cultural thing that we do: your grandma and your aunties and your family members will come, your extended family will be there when you're sick, especially if you may pass. If it's a child everybody will be here."
Strom tries to make sure communication between patients and hospital staff is smooth.
On one ward, Strom looks in on 60-year-old Glenn Greene as he finishes dialysis.
"Are you feeling really sleepy right now?" she asks him.
Strom knows Greene, who lives in Minneapolis, from his last stay in the hospital. She referred him to an American Indian diabetes program and said he's been doing better lately.
But a stubborn wound on his foot has landed him back in the hospital, where doctors told him he also has pneumonia. Greene's voice is faint as he tells Strom a podiatrist is coming later for tests.
"Okay, well let me know if there is anything you need and I'll be back in to see you tomorrow," she tells him. "But if you need anything or you need me to call anybody, let me know, okay?"
Greene said he appreciates Strom's assistance and friendly face.
"Oh yeah, she's pretty helpful here," he said. "I can talk to her about whatever and get some help."
On average, Strom sees about 120 new American Indian patients a month – equivalent to almost half the non-emergency beds the hospital has available at any one time.
A common barrier to regular treatment is poverty. But a wariness of doctors among Indians also is a factor.
Many American Indians have a general mistrust for the medical profession, said Vikki Howard, who works as an Indian health advocate at North Country Regional Hospital in Bemidji.
"A large number don't have a primary care provider, meaning they don't go to the doctor regularly, they don't have a physician that they have a relationship with," she said.
Dr. Dawn Wyllie, chief medical officer and deputy area director of the Bemidji Area Indian Health Service, said there's no data to show American Indian patient advocates directly improve health.
But Wyllie said there's strong anecdotal evidence that it helps, especially with chronic conditions like diabetes and cardiovascular disease.
"That individual can advocate for the kind of services, not only while in the hospital but outside, in part of that coordination of aftercare that will be happening and sometimes a patient needs a voice," she said.
Wylie supports the expansion of patient advocate programs.
But Dr. Donald Warne, who heads the Office of Native American Health at Sanford Health in Sioux Falls, said chronic underfunding of the Indian Health Service, which serves 1.9 million people, is a major reason that tribal populations continue to have the worst health problems in the region.
"So the result is that people are on long waiting lists to get what most of us would consider to be basic standards of care," he said.
There are proposals that would boost funding and make changes to the Indian Health Service. Unless that happens, many people, particularly those outside the Twin Cities metropolitan area likely will continue to have poor access to care.